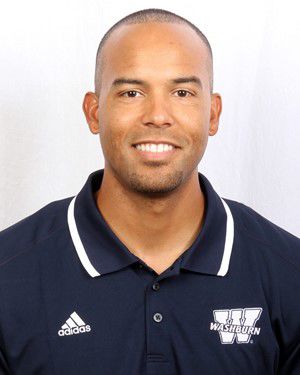 After graduating from Emporia State, Babb became a graduate assistant. He soon found himself working at Blue Valley North High School, where he coached for two years before leaving for Limestone College in Gaffney, South Carolina. There, he was named the Conference Carolinas Outdoor Head Coach of the year and the NCAA Division II Southeast Region Indoor Head Coach of the year. After a year as an assistant, Babb was promoted to be a head coach for the first time. He then went to coach at West Texas A&M before returning to his hometown.

Topeka, being his hometown, had a lot to with making his decison to move to Washburn.

“I had always thought they had good potential… I wanted to come here,” Babb said.

He thought that there was plenty of talent in Kansas, enough to create a quality squad to compete with the rest of the MIAA.

During his time in South Carolina, he met his wife Jaimilyn and son Christian. Christian is in fourth grade and is starting sports- he loves them almost as much as his dad.

“I met them, both, in South Carolina. I was lucky enough to convince them that it was a good decision to follow me across the country,” said Babb.

To recruit players, Babb looks for athletes that can perform consistently. He can look at an athlete and just see that they have the body for what it takes to be either a thrower or a sprinter. As much time as he puts into scouting the strengths of each athlete, he looks for the little things that will hinder their success at the collegiate level, and steers clear of them.

“If they aren’t proactive in the academic side, that’s kind of a sign that it may be hard for them to handle college athletics. Here at Washburn, it is a bit more rigorous than some of the other schools that I have been at. Also, if there is a kid that just doesn’t really love to do track and field, they just want the money for college. We want kids that want to be a track and field athlete first,” Babb said.

Every day, when Babb goes to work, he believes that it is not actually work. He loves his job. Early in his job search, he was not sure about what he wanted to do with his life. That was until his junior year, when he realized that after his senior year he would be done with track and field. Babb decided that he wanted to continue his love for the sport and coach after he got out of college. From going to the track for practice, to traveling with the team on the weekends, this was his life and it was something that he couldn’t live without.

“It [coaching] doesn’t feel like work to me! It’s just something that’s part of who I am, who I have been since I was a high school athlete. Sports is just ingrained in what I do in my day-to-day activities,” Babb said.

“I am really looking forward to this season. We have a good group of kids. I think we are going to continue to get better at what we have worked on.”

Babb and the cross-country team are ready for the season. Over the past weekend, they competed at the Southwest Baptist University Invitational in Bolivar, Missouri. Their next meet will see them travel to the Missouri Southern State Stampede in Joplin, Missouri.