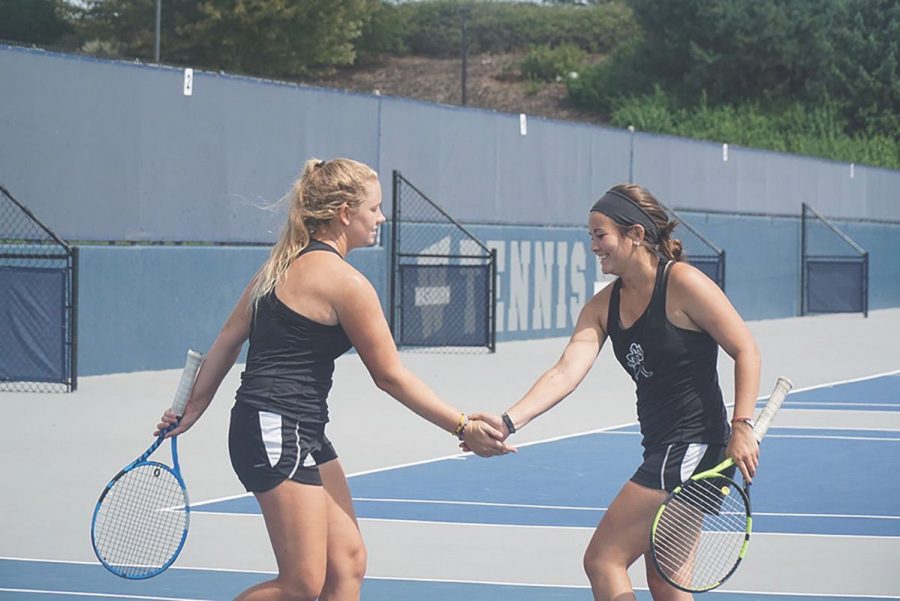 Cooper Tennis Complex was filled with shouts of “Go Bods!” as the men’s and women’s tennis teams competed in their first tournament of the season last weekend in Springfield, Missouri.

The tournament was organized by Drury University of Springfield, Missouri. Just before the matches began, it was announced that the competition had been switched to a scrimmage. None of the wins or losses would count toward the teams’ records.

Despite this unexpected change, the Ichabods took the opportunity to practice for the season ahead.

“Drury is our first match in the spring, so it was good to see how we match up against them,” junior Logan Morrissey said.

The Ichabods also faced Southwest Baptist University during the tournament. Morrissey said that these two schools are considered to be two of the top teams in the region, and Washburn was able to pull close matches against them.

“It was good practice for the new players,” Morrissey said. “Since it was a scrimmage, there’s not that pressure there, so they can just get a feel for matches and how the teams are going to be.”

The men’s and women’s teams each have three new players this year. On the women’s side, freshmen Svea Crohn and Kinsey Fields are joining, along with sophomore Maria Soler Valverde. For the men, sophomores Luke Howard, Marc Roura Casi and Henry Zeiders have been welcomed to the team.

These new players bring with them a new dynamic for the year.

“I think it’s good to make new connections and have new people be part of the team to change it up,” said sophomore Bradley Eidenmueller. “Even though we were a really good team last year, some changes are always going to help it.”

The 2017-2018 season was filled with surprises and accomplishments for the tennis teams. The Ichabods defeated longtime rival Northwest Missouri State, and the men qualified to compete in nationals.

The women barely missed qualifying for regionals last year, and they are focusing on getting there by the end of this season.

“I think we can [qualify] because we were really close,” Morrissey said. “We were right there with some of the better teams last year and I think we can beat them this year.”

Although the Ichabods are still resting at 0-0 for the season, the scrimmage wins have helped build their confidence for the upcoming matches.

“Considering that it’s such an early stage of the year, and he [Coach Lysaught] re-arranged the whole team completely differently. We actually did pretty well,” Eidenmueller said. “There were a lot of ‘Go Bods’ going around the whole facility.”

To kick off their official season, the Ichabods will face Cowley County Community College at 1 p.m. Tuesday, Sept. 11 at Washburn’s home courts.