Violinist and pianist showcase their talents 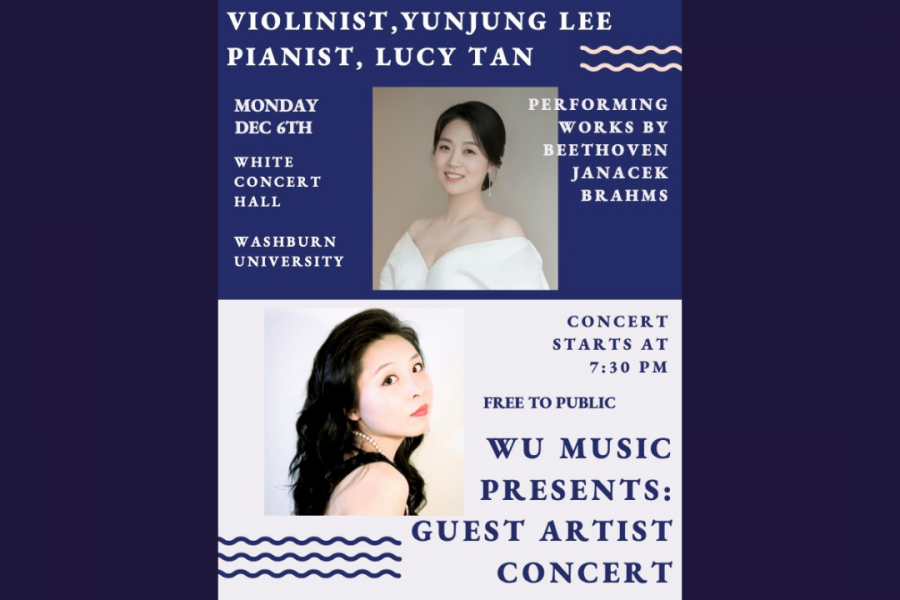 White Concert Hall was filled with the classical renditions of history’s greatest composers Monday, Dec. 6. Washburn welcomed Dr. Yunjung Lee, an accomplished violinist and conductor from Korea, to perform in the Guest Artist Recital alongside Dr. Lucy Tan, keyboard division director at Washburn.
The pair had the audience starstruck as they played “Allegro con brio”, “Tema con variazioni: Andante con moto”, and “Rondo: Allego” by Ludwig van Beethoven. It was certainly a first act that would not soon be forgotten. Lee and Tan’s piano skills complemented one another rather than one overshadowing the other.
The audience held their applause as Lee and Tan finished their music from Beethoven and dove right into music by the composer Leoš Janáček. Audience members were delighted to hear pieces such as “Con moto”, “Ballada”, “Allegretto” and “Adagio”.
While some audience members admitted to not being familiar with classical music or the famous composers, it did not deter them from attending the performance and finding joy from the talented musicians.
“Our daughter lives in Topeka and she knew about the concert and said we should come out. It was so beautiful and uplifting. We are so glad we came,” said Marquelle Anderson.
The musicians took a bow to appease the audience and their loud applause before leaving the stage during intermission.
Several students from the music department at Washburn discussed what they thought of Lee, who had attended their master class earlier that day to discuss her music journey.
“I met Yunjung in the master class earlier. So, as a fellow violinist it’s really cool to hear a professional playing,” said Gabriel Kniffen, a sophomore majoring in music at Washburn.
After the intermission, Lee and Tan returned to the stage for the second half of the performance. The concert hall was patient as the pair warmed up their instruments in preparation for the dramatic symphony.
Lee and Tan hit every note of the pieces written by composer Johannes Brahms. The musicians brought equal passion to “Vivace, ma non troppo”, “Adagio” and “Allegro molto moderato”. The ninety minute performance flew by r as audience members became so engrossed in the music.
Lee and Tan smiled behind their masks as they joined hands and took several bows in response to the applause that filled the auditorium. Some audience members gave a standing ovation for the talented musicians. It is hard to deny that there was hard work put into the performance, which surely left an impact on those in attendance.