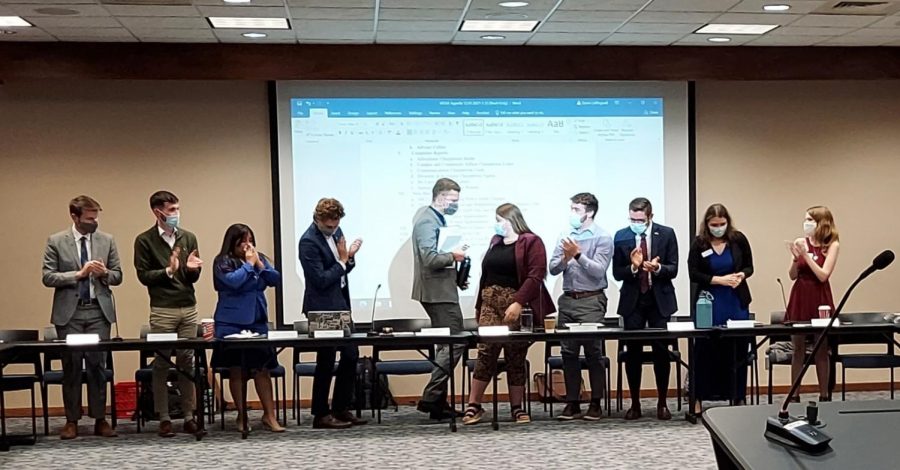 Send Off: Dylan Babcock (center left) retires from his position as WSGA vice-president with one final gavel. Everyone attending took to their feet and applauded him as he took a seat in the gallery at the meeting Dec. 1, 2021.

As the last meeting of the semester, Wednesday, Dec. 1, 2021, was a time of transition for members of the Washburn Student Government Association. Due to several members graduating there was a transfer of a few cabinet positions to replace the departing members along with usual business to attend to.

Public Forum I: Presentation of Senior Awards, due to several early graduations for members of WSGA, President Trautman wished to present the graduating seniors with the awards they would typically be gifted at the banquet in the spring but would be unable to attend as they wouldn’t be Washburn students at the time.

Tomi Francis-Ramirez, vice-chairperson, was recognized for her year and a half of service at WSGA as well as huge compliments from Trautman. Jarron Caffrey, chief of staff, was awarded the lifetime award due to his membership with WSGA throughout his entire Washburn career, and Trautman shared an anecdote about how she was the one to encourage him to join WSGA. Tearfully, Trautman gave Dylan Babcock, previous vice-president, his lifetime award and a huge thanks from Trautman for sticking with her through their administration.

“The three of you are going to do fantastic things, I have been here since you all joined, and I’m so excited to see you all graduate, and I truly cannot wait to see what you do in this world because it will make a resounding impact for those around you” Trautman said.

Once the previous vice president, Dylan Babcock, had gaveled out to symbolize retiring his title of vice president, while current Vice President Hanes replaced him in his seat. Throughout the exchange, WSGA stirred up a thunderous round of applause for both the retiring and incoming vice-presidents.

“I don’t think in my time, I’ve seen very many standing ovations. But I also haven’t seen a couple of people who deserved it more,” said Parliamentarian Zac Surritt. “The amount of leadership that has come from all of you, the last couple years, has been tremendous to watch.”

Moving on from the emotional rollercoasters, WSGA also conducted weekly business at the meeting, including the recognition of HIV/AIDS, a funding request and ended up tabling the legislation about potential changes to the funding policy.

SR 21-22 #021: World AIDS Day and World AIDS Month, originated by Ethan Nelson, vice-chairperson and senator. This legislation outlines the importance of education and recognition towards HIV/AIDS, and that WSGA will be recognizing December as World AIDS Month. WSGA mourns those lost and plans to promote educational material and information about how to prevent transmission, as well as the services offered at Washburn. Motion passed.

SB 21-22 #076: Exercise and Rehabilitation Science Majors Club has asked WSGA for $2,000 to cover the cost of lodging during a conference trip that many members of the club plan to attend. The club has already planned to shoulder the costs of transportation and food themselves, and the conference presents the opportunity for members to present any related research they would like, though no one from Washburn will be presenting this year, as it is their first year attending. Motion passed.

This was the last WSGA meeting for this semester. They will meet back up again in January once school kicks up again.