Deffebaugh delivers for men’s basketball in win over Nebraska-Kearney 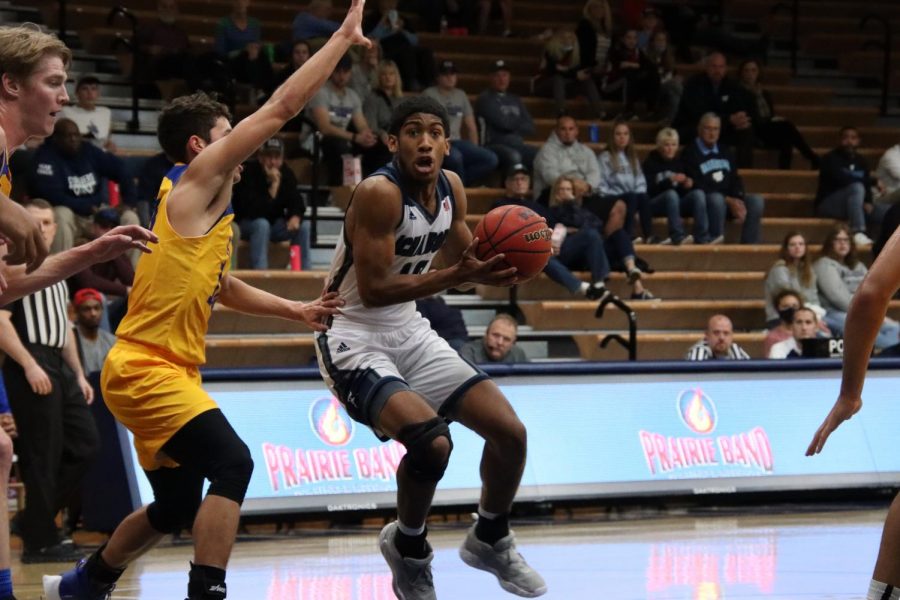 Sophomore guard Connor Deffebaugh drives the ball in the first half Dec. 4, 2021. Deffebaugh recorded five assists in the game.

After dropping a close first game of conference play to Fort Hays State, Washburn men’s basketball looked to get back on track Dec. 4 against the University of Nebraska at Kearney.
Offense was slow going for the Ichabods early on, as they only managed four points in the first five plus minutes of action. The slow start led to a 12-4 deficit before senior guard Jalen Lewis knocked down a three-pointer.

Washburn’s defense slipped a little bit in the middle stages of the half as its offense picked up with the outside shooting burst and nine early points by sophomore guard Connor Deffebaugh. The Ichabods were able to break through and take a lead after back-to-back layups by freshman guard Michael Keegan who added a key block on the defensive end.

The Lopers came right back to take the lead spurred by its five three-pointers in the half. The two sides battled back and forth in the final minutes before Nebraska-Kearney took a 34-32 lead into halftime.

Scoring came easy for both teams out of halftime, with Washburn leading the second half scoring 16-14 after almost six minutes of play. In that time the wings, Keegan and Deffebaugh pushed the pace, each scoring four points while freshman forward Andrew Orr also scored four.

Out of the break the Ichabods went on a quick 7-2 run with back-to-back three-pointers by Deffebaugh and senior forward Jeremy Harrell to take a 55-50 lead. The Lopers offense picked up in response, coming back to take a lead which was quickly erased on an and-one finish by sophomore forward Kevaughn Ellis.

“Kearney plays guys a lot of minutes and so we always wanted to play with pace and we did want to wear them down. I thought we got some opportunistic transition opportunities which was good,” said head coach Brett Ballard.

The two sides went back and forth until the five-minute mark hit, with Washburn in front 70-68 after a three from Harrell, who scored all ten points in the second half off of the bench.

“Just coming in, in the first half we were kind of dead, and I knew we needed that spark on the defensive end, so that is what I did,” Harrell said.

The next basket for the Ichabods did not come until the 2:52 mark in the form of a corner three by freshman guard Levi Braun to take a 73-71 lead.

It held until the 27.7 mark when Nebraska-Kearney ran an inbounds play that resulted in a corner three for guard David Simental, who finished with a game-high 21 points and tied the game at 77.

Washburn was able to hold for the last shot allowing Deffebaugh to wind down the clock and attack with ten seconds on the clock as the lefty drove right and put in the game-winning basket with his right hand with two seconds left.

“We needed a bucket. Coach called a play, tie game. I wanted to get something downhill, get to the rim, hopefully get fouled and then I made the shot,” Deffebaugh said.

The full court heave did not fall and the Ichabods came up with the victory, moving them to 4-4 on the year.

“We have been going through a lot this past week as a team, just going through adversity, so this game was just really good for us to come together.”

The win moved Washburn to 4-4 on the year and an even 1-1 record in MIAA play after one week.

“This is a game. They are all important, but it felt like it was a big one from the standpoint that it gave us confidence,” Ballard said. “You can’t dig yourself too much of a hole in this conference if you want to compete for a championship.”

Deffebaugh led with 19 points on 8-10 shooting, while dishing out a team-high five assists as well. Keegan added a career-high of 18 points and eight rebounds while Ellis and Harrell finished with 11 and 10 respectively off the bench.

Next up for the Ichabods is a trip to Edmond, Oklahoma to face the University of Central Oklahoma Dec. 9.