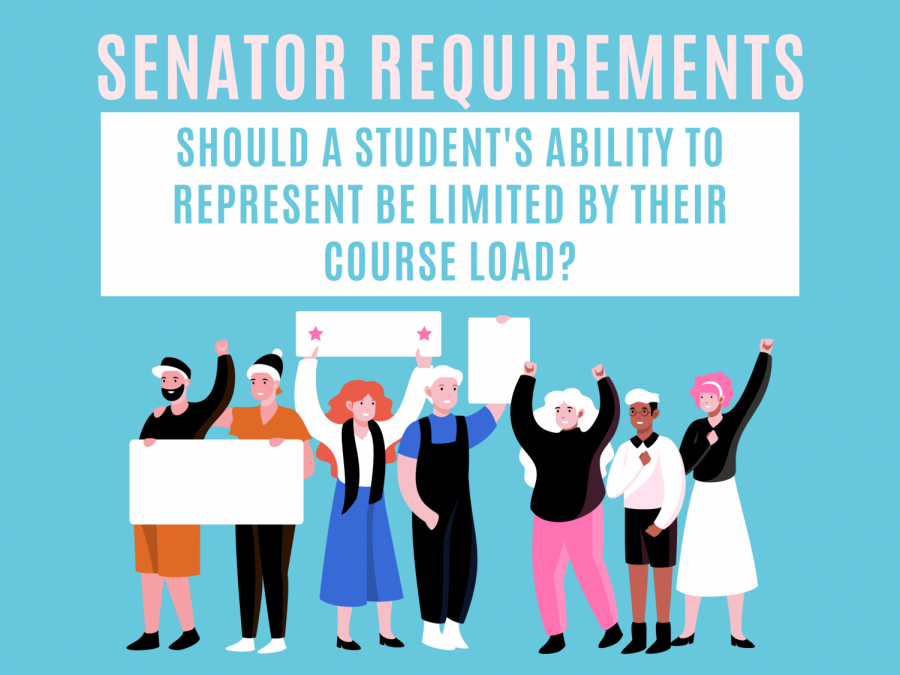 The requirement for senators to be enrolled in six credit hours in order to hold office ruffled some feathers at the Nov. 10 and 17, 2021 WSGA meetings.

The topic of the requirements for Washburn Student Government Association Senators as brought up by bills SB 21-22 #067 & SB 21-22 #072 has been discussed multiple times. These two pieces of legislation, originated by Ethan Nelson, vice-chairperson and senator, were similar with only minor adjustments, and both intended to bring the same change; lower the number of credit hours required of senators to apply and maintain their seat in Washburn Student Government Association. Due to the general lack of consensus, both legislation pieces failed, and the issue remains a source of tension for WSGA as a whole.

Both sides of the argument had strong defenders of their view, and from the energy in the room during the debates, it felt like there was not much opportunity for a middle ground. According to Senator Sierra Jeter, it became an issue that if someone were to oppose it, then they were against diversity and representation. This kind of atmosphere was frustrating to several people involved and bled into the elevated emotional states during the debate time.

Those in favor of this change argued that the current requirement of six credit hours was unfair due to the $55 student activity fee. This fee is charged to any student taking any number of credit hours, of which a portion goes to WSGA’s budget. They also argued that the number of credit hours does not define how involved a student is or isn’t, and any student at Washburn should be entitled to the right to represent themselves on WSGA.

In contrast, those opposing the legislation pointed out that WSGA has yet to have an issue in which a student did not meet the credit hour requirements, and that six credit hours is far from a strenuous standard, as typically that is two classes in a semester.

It was also brought up that WSGA is an organization meant to be good role models for the student body. And that part of being one is being involved and in good academic standing, as another requirement is to maintain a cumulative and semester GPA of 2.0 or higher. Additionally, any student has the right to sit in on committee and full senate meetings. They are constitutionally allocated time to speak to the Senate as all senators are as well, and in the circumstance that a student who is not a member of WSGA has attended two consecutive committee meetings, they can be given the ability to vote at the third at the discretion of the chair of the committee or other WSGA members in certain positions as defined by the WSGA By-Laws, in Section 1., General.

The issue that this requirement of six credit hours presents is one of representation and fairness; can people truly represent themselves, and be represented if they are barred from the ability to join their student government association? And is it fair to use the activity fee charged to students enrolled in less than six credit hours for WSGA’s budget?

“I’m a big believer in fairness. I think that we should be open to all. The WSGA motto is ‘students serving students.’ That spoke to me, and I felt that in order to be more inclusive as WSGA, we should open it up to more students with fewer credit hours,” Nelson said.

This topic has been brought up twice now and failed both times. For the time being, Nelson says that he doesn’t want to push it onto the senate any further, as it is clear that it’s not popular enough to pass. However, he also expressed that he would be happy to support someone else in the future if they were passionate about bringing the legislation back.

Even with this outcome, the WSGA still maintains that they would like the student body’s feedback. and Senator Jeter made it clear that she would be wholly willing to fight for anyone’s right to representation, though she voted against the legislation.

“If we [WSGA] see that a majority of students want to see that credit hour [requirement] be limited, then obviously we’re going to bring it up again. It’s not our word over everybody else. We want to hear the students,” Jeter said. “If you have any concerns, if this has been troubling you for a while, come see the WSGA office… Or you can come find me, and talk to me about it. I’m more than willing to represent you or talk about having a meeting. I’ll even bring you to a committee meeting if you want to.”