Men’s basketball tripped up by Tigers in 68-58 loss 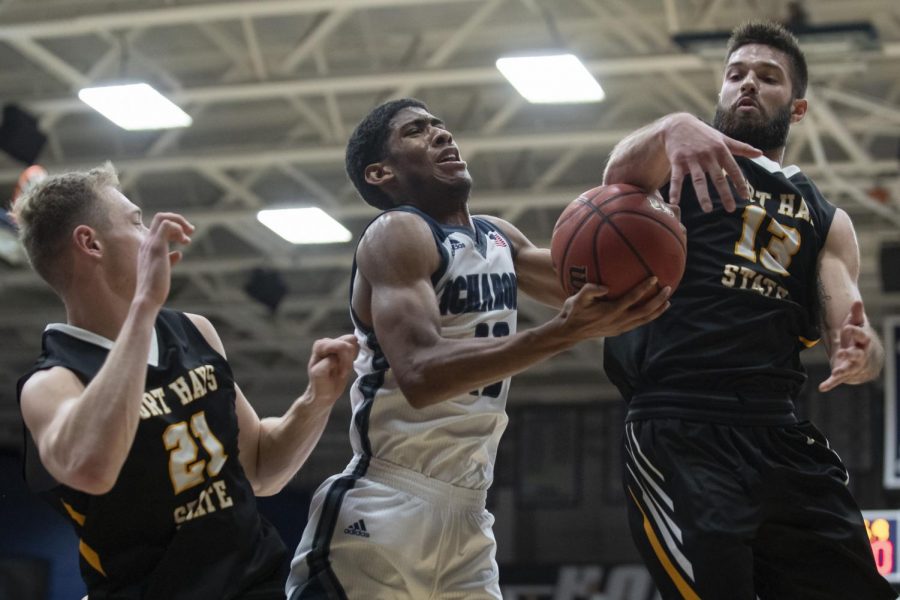 Even when ravaged by injuries, Washburn men’s basketball team finished its non-conference schedule with a win over Benedictine College. The win moved the Ichabod’s record to 3-3 as MIAA play began Dec. 1 with a game against Fort Hays State, who entered the evening with a perfect 4-0 record.

Washburn got off to a quick start, connecting on its first three shots to take a 6-0 lead. The Ichabods continued to push the ball inside while the Tigers got hot from deep, knocking down three three-pointers to take a 17-14 lead.

It did not last long as Washburn went inside again to freshman forward Andrew Orr, who went on a 6-0 personal scoring run to take the lead right back and put him in double figures on a perfect 5-5 shooting with 8:33 still left in the half.

“The coaching staff and even the team has done a really good job of getting me ready and helping me prepare and be confident in my abilities,” Orr said.

Fort Hays countered with good ball movement and a 9-0 spurt of its own to retake the lead. The deficit grew to as many as six points before sophomore guard Connor Deffebaugh knocked down a driving layup and a three-pointer. Heading into halftime the Ichabods faced a 36-27 deficit after the Tigers scored five points in the final minute.

The beginning of the second half was choppy with each side committing fouls early on. As the flow of the game picked up Washburn was able to get back-to-back baskets, first by Orr and then a driving finish by freshman guard Michael Keegan to pull within three. The defense picked up in the middle of the half as each side failed to score for nearly three minutes.

“Our defense has been pretty solid in all of these games and kept us in it, we just got to find a way to score the ball,” said head coach Brett Ballard.

As the offenses continued to struggle in the final ten minutes, Fort Hays got to the free throw line and crashed the offensive glass while the Ichabods did not, allowing the Tigers to take a double-digit lead with 6:04 remaining.

“We give up too many offensive rebounds and that’s really at the end of the day what loses us the game, we can’t give up those extra possessions,” Orr said.

Some life was brought back into Washburn shortly after beginning with a wrap-around pass from junior guard Isaiah Thorne to Keegan who then came up with a steal and finished on the next possession, making it a 55-48 game at the five-minute mark.

A big three by Thorne with 3:12 left pulled the Ichabods within three, but Fort Hays came down and got to the line again, then knocked down a turnaround jump shot to lead by six with 2:17 left. Washburn got a stop the next trip down, and the Tigers started to miss at the line, leaving the door open.

A driving layup by junior guard Jalen Lewis with 21 seconds left brought the Ichabods within four points, but that is as close as they would get as Fort Hays finished the game 6-6 at the line to win 68-58.

“I think there are some things we can control that we will show on film, intangible things that don’t require talent, that just require effort that can allow us to win these games,” Ballard said. “So that is going to be our focus, the execution and effort part of it, continuing to improve in that part of it.”

The loss dropped Washburn to 3-4 on the year and 0-1 in MIAA play with a chance to even both records up with a home game Saturday, Dec. 4 against the University of Nebraska at Kearney.