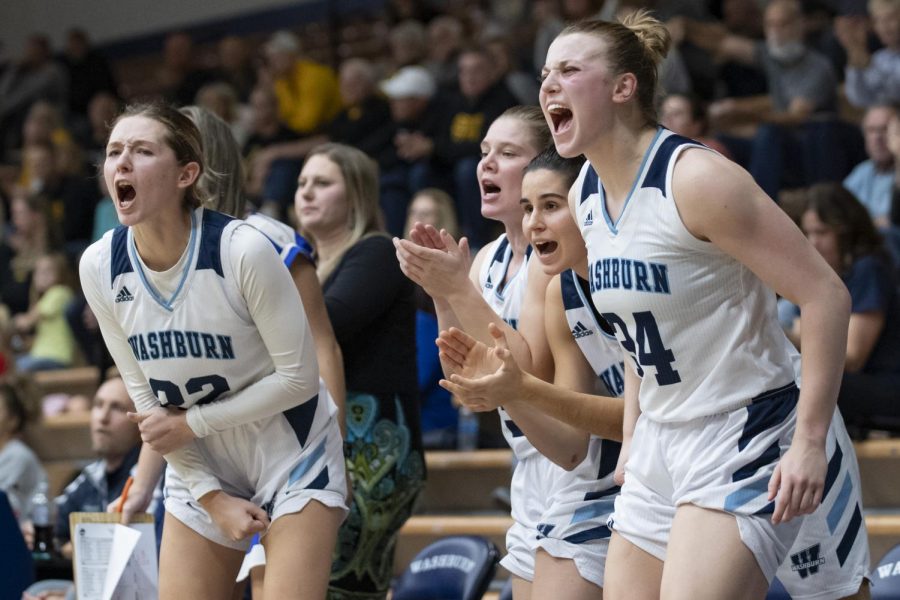 The Washburn bench cheers after scoring Wednesday, Dec. 1, 2021, at Lee Arena in Topeka, Kansas. The Ichabods fell to Emporia State 72-50 in the game.

After losing three games in a row, Washburn women’s basketball began its conference slate with a 1-4 record on the year. The Ichabods were faced with a tough task as the number one ranked Fort Hays State Tigers visited Lee Arena Dec. 1 for the first MIAA game of the season.

Fort Hays looked every bit like the top team in the country to start, using its height advantage to get out to a 12-2 lead after just over three minutes. Washburn went to its bench earlier than usual and they responded, scoring eight points as a group in the first quarter and keeping the Tigers out of the paint, leaving the game at 17-12 after ten minutes.

In the second quarter the offense from Fort Hays moved to the outside, as they knocked down two quick three-pointers and shot 57 percent overall. On the other end the Ichabods offense continued to have trouble with the size of the Tigers, with Washburn shooting less than 30 percent from the floor.

“Against that kind of team, you can’t do that,” said head coach Ron McHenry. “That’s kind of been what we have done all year, we just kind of have moments of pretty good basketball, just not long enough.”

Going into halftime Washburn’s leading scorers, senior guards Hunter Bentley and Nuria Barrientos each only had five points as they faced a 36-24 deficit.

Out of the break the Ichabods defense shored up, allowing only four points in the first three plus minutes. They were able to cut the lead down to eight points after a dish by freshman guard Aburee Dewey to sophomore forward Emma Chapman in the post. Fort Hays then responded, going on a 13-2 run to close the quarter leading 55-36.

In the fourth quarter Washburn kept it close but was not able to cut into the deficit as it grew to over 20 points. Barrientos scored four early points and freshman guard Alie Fulks recorded her first career points on a three-pointer, which accounted for most of the Ichabods offensive production in the quarter. Each side began to work in the benches with under five minutes to go as the scoring slowed down and the Tigers eased into a 71-50 win.

“Every night from about two in the morning until six at night, new offenses rotate, who’s going to be here … it has just been a battle,” McHenry said. “You’re trying to give everybody an opportunity to play, but I’m also trying to find someone who can play well for a long time and I want to leave them out there.”

Barrientos and Bentley each paced Washburn with nine points while Dewey and sophomore guard Macy Doebele led the way with five rebounds.

“They are number one in the country right now, they are really good and we fought,” Barrientos said. “It’s the first game of conference play, we still have like 24 more to go and we just are getting together and trying to do the best we can for the next game.”

The loss moved Washburn to 1-5 on the season and 0-1 in conference play as they are set to welcome the University of Nebraska at Kearney Saturday, Dec. 4.