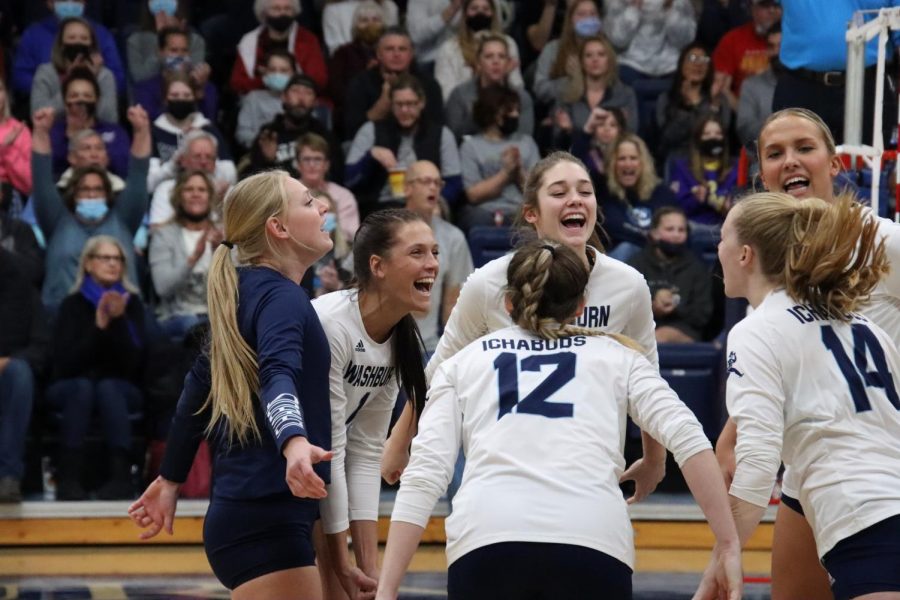 The team celebrates after knocking down a kill in the first set on Nov. 13, 2021. Washburn fell to Northwest Missouri 3-0 in the match.

After entering the tournament as the fifth seed in the Central Region and sixth overall Washburn Volleyball is moving on to the semifinal round after defeating the fourth seed Winona State University Dec. 2.

The Ichabods senior class showed out in the 3-1 victory with outside hitter Genna Berg leading with 19 kills while middle hitters Allison Maxwell and Kelsey Gordon added 12 and 10 respectively. Senior setter Allison Sadler dished out 40 assists in the match and added 14 digs for a double-double, Berg joined her in that respect, adding 14 digs.

In the semifinals Washburn gets a chance at revenge on Central Missouri who enters the tournament ranked No. 1 in the region and overall.

The two will square off in Warrensburg, Missouri at 7:30 p.m. Dec. 3 and the game will be broadcast on the MIAA Network.