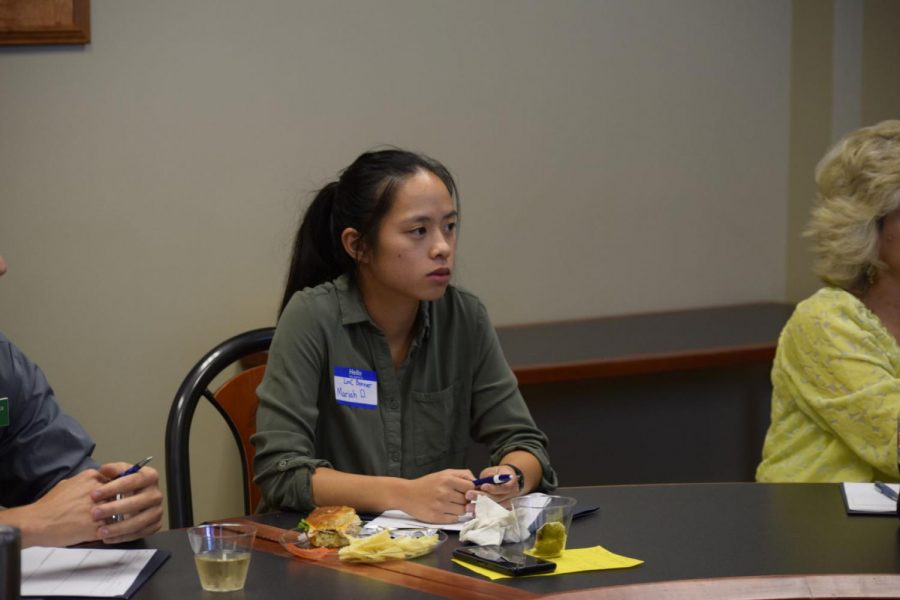 Junior Mariah Debacker sits in and joins the breakout group discussing dependent care. The group is planning to organize a summit to bring the issues they discussed to the greater community.

Students, faculty and people from the community got together to address the issue of poverty in Topeka.

The Topeka Community Conversation for poverty reduction was on campus Sept. 15 in Washburn B and was organized by Evan Hahn, a senior social work major who is also a part of the Bonner program.

The event, which lasted throughout the morning and early afternoon, brought together people from various walks of life to discuss ways in which they could affect change in different areas that deal with poverty.

It opened with talks from Elane Johannes, a professor at Kansas State University who works with Thrive, a non-profit group focused on helping people who are in poverty, and Dale Matherly, a pastor from First Christian Church in Topeka and chair of the board for Thrive in Topeka.

Thrive works with people on a long-term basis by walking alongside them as they work their way out of poverty. Johannes spoke about how the building of relationships can help those in poverty, specifically with their psychology.

“Relationship matters because it does change brain function if it’s done consistently and over time,” Johannes said.

She went on to say that she has seen first hand in her work as a professor that relationship driven work helps people in poverty better than just handing people money and moving along.

Matherly spoke about how Thrive in Topeka was formed. The work began due to the need seen at a previous Community Conversation for poverty reduction. There were many groups in the community working toward the same goal but seemed to be doing it separately from one another.

Matherly, coming from a Christian perspective, noted the difference in what he called “mercy” ministry, meeting the direct need of people, such as writing a check to pay for someone who needs rent money, and justice, which is changing things on a systemic level for good.

“We started talking about this idea of social connectedness… and the way in which that could make a difference in how folks respond,” Matherly said.

Matherly says it isn’t enough to just send people to places like Let’s Help, Doorstep or the Salvation Army. Often if the person has been there before, they are not able to get assistance until a period of time has passed.

After Johannes and Matherly spoke, the attendees broke up into groups. Their goal was to create service projects to address specific barriers in the community that can hinder people from getting out of poverty. The groups addressed the areas of basic needs, adult education and dependent care. These groups had little structure and were all about discussion and ideas.

The dependent care group looked at ways in which those who were truly dependent on others, especially those who are homebound, are able to receive care. They discussed both large issues, such as transportation and food security, and smaller issues within the larger ones, such as little to no sidewalks or bus routes in specific areas of the city and ways people can get food delivered to them if they cannot leave their home.

The main thing to come out of the dependent care breakout was the need to have a summit, an event that would allow other people in the community to get together and bring awareness as well as discussion on these specific issues.

One of the attendees who was in the dependent care breakout was Mariah Debacker, a junior occupational therapy student. She is also a Bonner member and feels like it’s important for all students to learn about these kinds of issues.

“The whole part about college is to learn right?” Debacker said. “I always want to broaden my scope… my practice by getting as much information as I can and learn as much as I can.”

Debacker said that in her career she knows that there will be times where she will have to deal with issues of social justice, such as poverty.

“It’s part of everyday life,” Debacker said. “You need to know about poverty.”

One thing that Debacker was disappointed about was the lack of students who came to the conversation.

“I wish more people would have come out here,” Debacker said. “The talks we’re having are very interesting, they’re beneficial and we’re going to make some change after today.”

The summit that her group is trying to organize is a place that Debacker hopes more students will come to attend.

“If we can get some of our organizations out to this summit, we can do some networking and see how we can make major changes,” Debacker said. “If you have a summit people would be more willing to help out [in other ways]. It would be kind of like a branch effect, that can spark something bigger.”

The Bonners is a group that Debacker said could really do some good since they are taught skills like grant writing, which could be useful to get help from businesses.

Overall, Debacker said that she thinks students should use the resources and they have on campus.

“We need to learn as much as we can about what’s available to us,” Debacker said. “I didn’t need to be here but I chose to be here. I chose to learn.”