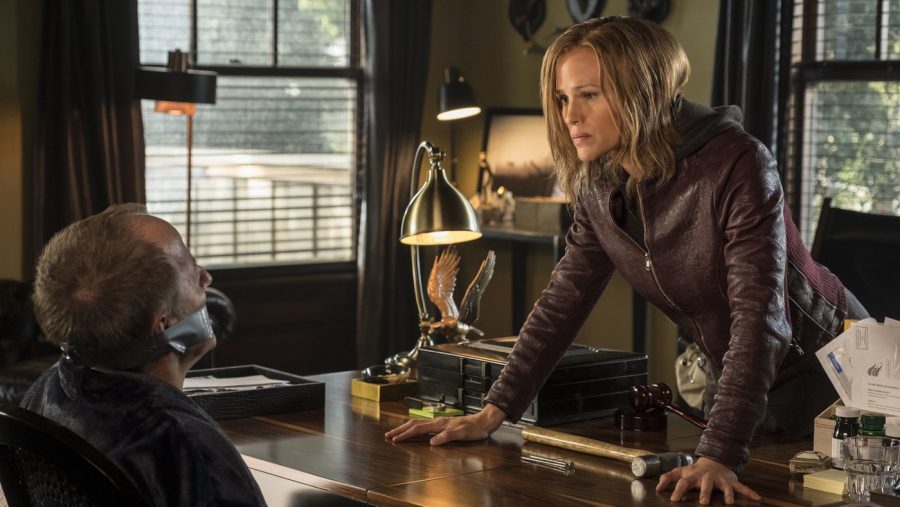 Jennifer Garner trying to be intimidating in "Peppermint"

Jennifer Garner’s revenge flick does have some enjoyment to it but most of it isn’t impressive and does little to push the envelope.

An average citizen’s loved-one gets harmed right in front of their eyes in a public place. They survive and then get revenge.

This cookie cutter plot that many films have shared for decades applies to “Peppermint,” directed by Pierre Morrel, best known for directing “Taken.” The movie was written by Chad St. John, starring Jennifer Garner as Riley North.

Riley North is a woman whose husband and daughter get murdered in front of her, and she doesn’t receive justice. She disappears and comes back for revenge, catching the attention of law enforcement. The story is incredibly generic, along the lines of one of those Saturday Night Live parody trailers, but this is very self-serious. The film has some surprisingly noteworthy moments of action, but it feels like the majority of the movie was spent on exposition. Altogether, the movie felt like it ran far too long.

Overall, the plot is really predictable with an illogical twist and incredibly predictable ending. I’m usually a sucker for the stories of people who go from being normal to being super skilled and having insanely high pain tolerance, but this one never particularly shows how Garner’s character suddenly became a female punisher, complete with a van full of guns and all. You have to suspend your disbelief considerably for the character to work as the character development is terrible.

Throughout the film, you see pre-murder and post-murder versions of her character, and while Garner does a good job, there was nothing amazing about the performance. That really applies to the rest of the film. The rest of the actors are great, it’s just that they are written poorly, and generally not very strong characters, or wildly miscast as is the case with this film’s villain.

One of the larger problems of the movie is the lack of a good villain. He is there, but you are never intimidated by him at any point. The actor, Juan Pablo Raba is fine, but the villain as a character doesn’t have a presence. The entire gang of villains not inhabiting law enforcement is basically a one dimensional MS13-type gang of people that are really stereotypical.

The role of law enforcement in this film, other than many being portrayed as corrupt, is that most are portrayed as really dumb, especially the central cops. They drag their feet as a convenience to the plot, and it is really noticeable.

Now to the part I actually enjoyed in the film. Of the lame action movies I have seen this year, “Peppermint” might definitely be one of the better ones. Although there are some weak quick cuts and a little bit of shaky camera, there were a couple of video-game moments of Garner fighting cartel members. They were nowhere near John Wick level, but they were miles better than many other recent generic action movies, and it completely surprised me to see this as coming in. I fully expected a film with really awfully shot action, designed to hit a PG13 rating and not show anything, so I definitely give the movie kudos for that. That being said, this really isn’t a huge part of the movie, and while some movies I will watch to see frequent and fun action even though there is a straight-to-dvd plot (Scott Adkins action films come to mind- highly recommend them if you want solid action), this one just doesn’t really warrant the watch of an action fan as there are movies with less but better done action. This one is somewhere in between. Honestly, this film could’ve passed with a PG13 rating. At no point do I think they took proper advantage of the R rating.

Overall, this film isn’t worth sitting in a theatre for, or catching it on TV even. Those good moments of action don’t redeem the rest of the film for me. It’s yet another copy and paste revenge movie with too much exposition and a lame, uninspired core story that I really never want to watch again. If you are looking for a good revenge movie, there are plenty. There are so many better movies that are more fun all around and worth your time.