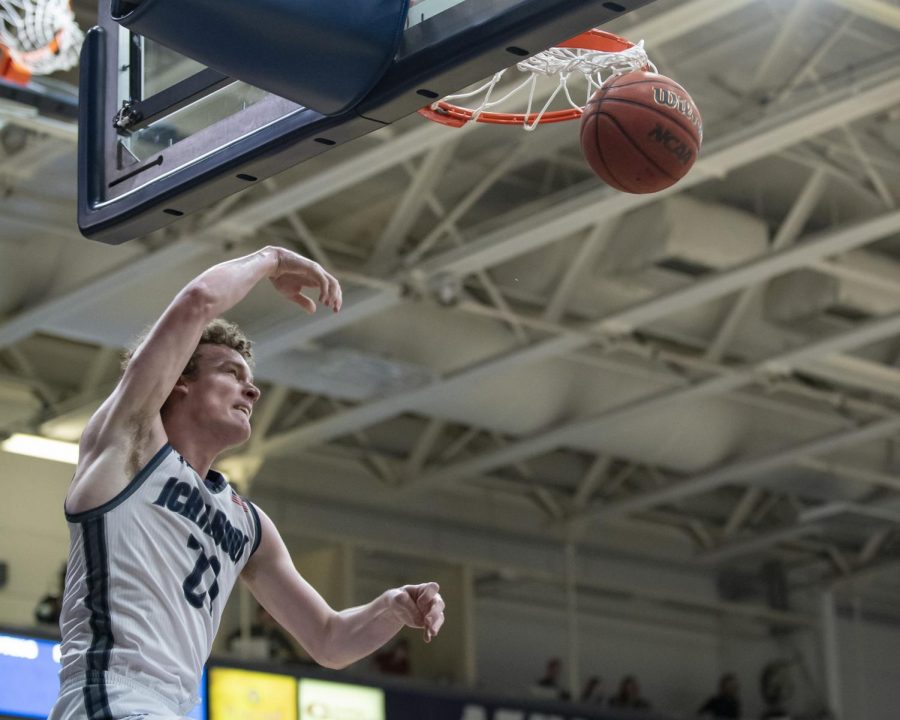 After dropping two straight games Washburn men’s basketball looked to get back on track against Baker University Nov. 20. The game against the 3-4 Wildcats would serve as the Ichabods home opener for the 2021-22 season as they looked to settle in after being hit hard by injuries early on.

The lead continued to grow for Washburn, up to 19 points with just over nine minutes to play in the half thanks to a six-point surge by sophomore guard Connor Deffebaugh. The Ichabods continued to play the passing lanes well, leading to seven steals and 12 fastbreak points in the half.

“We want to play fast and our transition game hasn’t been as effective as I would like early, so it was good for us to get some steals and get some easy ones,” said head coach Brett Ballard.

The lead remained over 20 until six points in the final 90 seconds of the half by Baker made it a 44-27 game at the break.

The pace slowed down and the scoring was even for both sides to begin the second half, with Washburn outscoring Baker 7-6 in the first five minutes. The Ichabods went on a 7-0 run following the timeout, continuing to force turnovers.

An 8-0 individual scoring run by freshman guard Levi Braun, part of his career-high 21 point day, broke the game wide open and forced a timeout for the Wildcats with 8:45 remaining and the score at 68-38.

“My teammates just did a good job finding me. I give a lot of the credit to them and the coaches,” Braun said. “It’s my job to make shots so I don’t really get surprised when I make shots.”

Both teams emptied the bench for the final five minutes but the Ichabods continued to score, growing the lead to 41 points on a steal and slam by sophomore forward Kevaughn Ellis.
The lead would only grow before the clock ran out with Washburn securing a 90-47 victory and moving to 2-2 on the season as players continue to adjust to new roles.

“It’s wild what we are dealing with right now from an injury standpoint,” Ballard said. “Right now we are kind of trying to piece it together day-by-day. It will be good for us in the long run I think because we are getting some guys some experience. When we get all of our guys back we have a chance to be really special.”

Braun was joined in double figures by Lewis, who finished with 14, along with Deffebaugh and freshman Andrew Orr who each had 12.

The Ichabods had 15 steals as a team, led by a trio of guards, Ellis, junior Isaiah Thorne, and freshman Azeem Ross who each had three. Thorne also led the way with four assists on the day.
Washburn will be back in action Nov. 23 when they welcome Oklahoma Baptist University to Lee Arena.