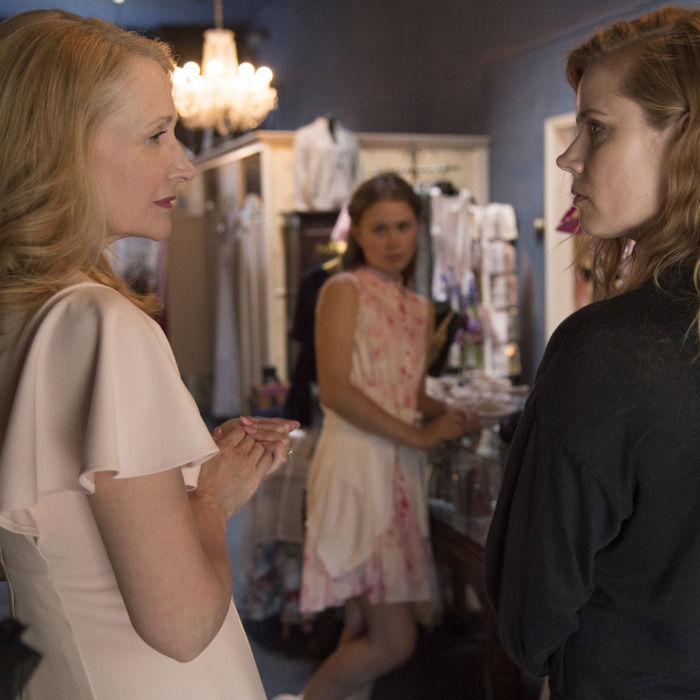 “Sharp Objects” brings art to the television screen. If some of David Lynch’s work paints a beautiful suburban environment with awful hiding in the cracks, then HBO’s “Sharp Objects” doesn’t hide evil. Based on Gillian Flynn’s debut 2006 novel by the same name, “Sharp Objects” is about Camille Preaker (portrayed  by Amy Adams), a reporter who goes back to her hometown of Wind Gap, Missouri to report on the brutal murder of a young girl, and another who has gone missing.

The setting of the series is like “True Detective” season 1 setting, but I’d say it surpasses TD. An ugly green, grimy place and a kind of place that you would drive past on a road trip. It would give you a strange feeling but the town, for how isolated it feels, has its own social hierarchy, and it is like its own little world. To compare it to David Lynch’s work again, Twin Peaks is a place of ethereal beauty of Americana and Wind Gap is a suburban hell on earth, unafraid to show its true nature.

Every single performance in this series is amazing. Adams gives an amazing, perfect performance. She deserves better than to be relegated to lame, ho-hum superhero flicks like “Justice League,” “Man of Steel” and “Batman v Superman.” Praising her wouldn’t do any justice for how resonant her performance was, and the rest of the cast matches her. Patricia Clarkson (who portrays Camille’s mother, Adora) gives an entrancing performance. She is the kind of character you absolutely love to hate, much like “Game of Thrones’” Joffrey, but she is absolutely the best example of this type of character.

There is also Chris Messina’s Detective Richard Willis, and having not seen Messina in anything, this guy’s acting chops were established the minute he appeared. He really had a presence that I enjoyed whenever he appeared.  I want to give particular praise to Taylor John Smith and Eliza Scanlen who portray John Keene and Amma Crellin (Camille’s half-sister), two young actors that I’m sure have incredibly bright futures ahead of them. I have already seen huge amounts of acclaim pointed Scanlen’s way, deservedly so, but it isn’t only the main cast. All of these characters, especially Adams and Scanlen’s characters, resonated with me and I will not soon forget them. I really could name drop every single actor in this show, praise each performance and not have a bad thing to say.

These amazing characters with actors of a caliber to match, guide the story from beginning to end. Wind Gap at times seemed to be a particular Hell. A closed off, almost fakeness to the people there. You are in Camille’s shoes of wading through the most-apparent darkness and human evil that the town attempts to hide. The thing about the evil in this show is that it is made worse as the town and its people attempt to cover up with a façade, but it just makes it even worse.

The only problem I had with the show is the uneven pacing in the middle episodes, but even then they could be justified. While there were many slow moments in the midst of tense ones, “Sharp Objects” attaches you to the main characters incredibly fast. It wasn’t long after I started the series that I had an attachment to Adams and Scanlen’s characters, and I really got caught up in the story. I loved how easily it attached me to these characters in an eight episode, one off series.

Perhaps the only weakness with the amount of strong actors and characters is the screentime. I loved Taylor John Smith’s performance as a distraught son and brother, and I also loved Messina’s take on a big city policeman having to deal with the annoyance of everything that comes with a small town. I feel like they could’ve gotten some more screentime, but really, the show is about Camille, Adora and Amma.

The deep rooted turmoil surrounding Wind Gap and the main characters  is what elevates this show to how resonant it is. The relationships portrayed in this series have a believably to them that really is emotionally draining in the best ways.

Overall, this series is a seminal piece of modern television and it will most likely leave a legacy. I sincerely hope it does end with one season. It is the way the creators and the rest of the crew involved want it to be and I really think they’re right. This show is (I will say it over and over) a work of art. This series is pure, heartfelt poetry and it came out of nowhere. I already consider it one of the best series HBO has released, and definitely one of the best the entire TV industry has ever put out. Few series reach such great heights as this one does, and “Sharp Objects” is a required watch, plain and simple. It really needs to be seen to be believed how well made it is.