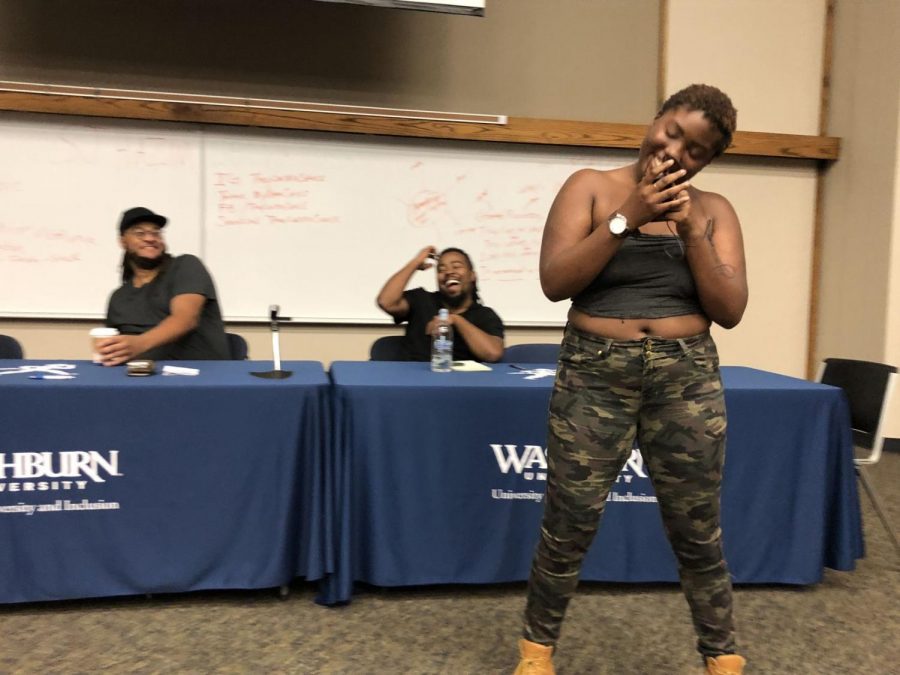 Jay Marie (center) freestyling at the open mic as the entire audience reacts the same as Marty(right) and Sauce(left) in the back.

Special thanks to our local artists; Marty, SJ and Sauce, who came out to teach and host this event. Another thanks to The Washburn University department of Diversity and Inclusion for making this moment happen. The fact that the people who are educated in hip hop, the making, creating and performing aspects of the art, and are willing to share their knowledge to help the youth to better expand their artistic horizons, to make their dreams happen. Thank you for giving the mic to the strong and brave voices of Washburn University.

The room was filled with excitement and smiling faces. Each group spread amongst the lecture hall in Henderson 100, around 4:15 PM, on Friday afternoon, as everyone anxiously waited and prepared themselves to perform for the other artists.

For many members of the Washburn Community, this was the first time they were able to perform in public. This was the first opportunity these students were offered the microphone to express the feelings on their mind and in their heart. The room was filled with laughter as the sign up sheet was being filled with names, and Marty and Sauce proudly scoped the room at everyone’s excitement.

“I’m very nervous but at the same time, I feel very happy that I have the opportunity, especially in a place that I am away from home where I can get up there and do something that I feel passion about,” said Sharpton.

She was the first performer at the open mic event. The crowd cheered as her poem expressing equality was read.

Jay Marie, Freshman and musical performance and voice major, was laughing with her friends without worry before the open mic began, and explained her pre-performing feelings,

“I’m a little nervous, this is college, there’s a lot more people, and I’m free styling. I think the turn out will be nice. I usually rap about my come up, and stuff that just comes to mind, for real,” Marie says.

Her performance got the crowd snapping along but was unfortunately cut short as her nerves got the best of her, she brushed it off, and was encouraged to perform again at the next open mic.

The soft-spoken performer, Isis McQueen, Freshman criminal justice major, also stuck around prior to the workshop, ready to perform for the open mic.

“I’m scared but I have a lot of confidence in my work, I don’t think I’m gonna get up there and fail… I have a lot of stage fright, but I just feel like I’m comfortable in this, so I can push me and then once I do this, I can kind of do more. I write whatever I feel, I chose if it’s gonna be a poem or a song,” said McQueen.

She read a personal poem she wrote during the workshop that shocked her audience and was awarded with applause.

The second that co-host Sauce called the room for attention to start the event, the room fell silent as each face was decorated with grins of confidence. Some students fiddled with their hands, others were opening their notebooks to pre-read their pieces aloud. Each artist was able to expand their minds and engage in each other’s feelings and thoughts.

Jane Elliot, Professor of theatre, currently teaching a voice and diction class at Washburn University openly conveyed her opinion, specifically focused on the importance of the Open mic event.

“I think that all students can benefit from seeing students who are self-actualizing, and as a person who works a lot with the voice, I think that this is a really exciting opportunity to see people who are using their voice in a way that is not casual. Even if it sometimes sounds casual, or uses casual words, but it is in fact very empowering and even radical in its own insistence. I think it’s a chance for students to see words and voice and soul in a different form or different medium than they usually do,” said Elliot

She also wanted to share advice to students who do express feelings of having stage freight,

“Never feel bad for having stage freight, it’s a chemical reaction in your body that you cannot control, you just have to chose how to manage it. You can chose to embrace it or not.”

She shares her strategy as her professor once told her, ‘count and name the butterflies you have in your stomach.’

Some performers went on to shock the crowd by the power of their voices, and others by the power of their words, it was obvious to anyone who attended the event, that every single performer spoke with natural talent and bliss, and it was a beautiful thing to be a part of. The nerves seemed to be ignored as each performer spilled their talent into the ears around them. After each performer presented their pieces, the room fell with a feeling of community. Every face was dressed in an accomplished smile, the feeling of being acknowledged, as a beautifully diverse community was effectively demonstrated during this event. The founders of this event were appreciated with every word that each person shared aloud. The founders gave a voice to the community who didn’t think they had one.

Marty and Sauce concluded the open mic with showing their appreciation to the performers for sharing their art as well their bravery and commitment. Each artist staged their piece uniquely, and it was a very wonderful display of togetherness brought together by diversity.

Struggling artists are invited to reach out Marty or Sauce as they hope to help build the youth community. ”The conversation doesn’t have to end here.” Marty expressed.

Sauce is currently co-running a hip-hop program for Kansas City Youth and invites you to reach out to him on social media; @Theycallmesauce