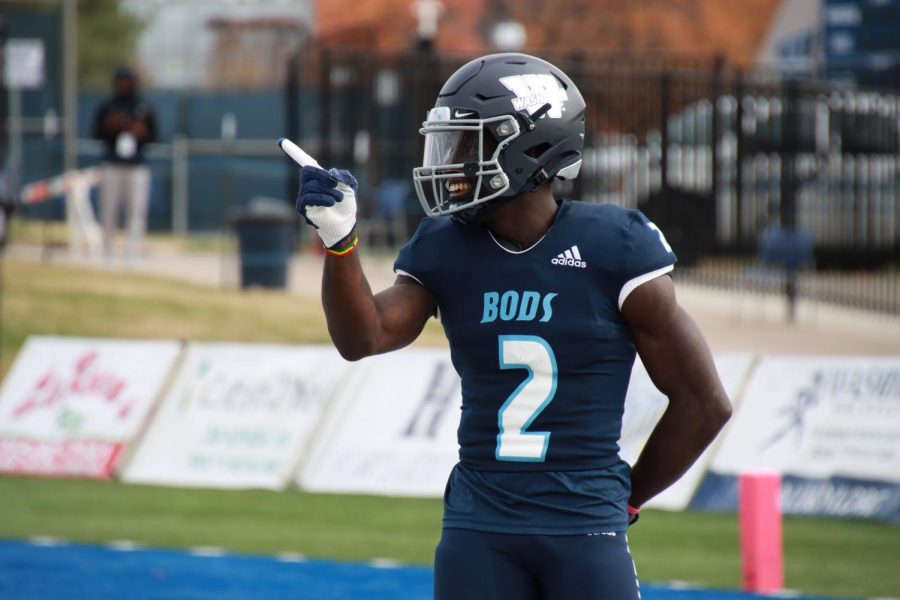 Riding a five-game winning streak Washburn football was back in action on Nov. 13 for a senior day matchup against Missouri Southern State University. The Ichabods would need a victory over the 3-7 Lions to keep conference championship hopes alive. The group of 15 seniors were honored on the field before kickoff would ensue.

It was a perfect start for Washburn as they forced a fumble on the first play of the game which was recovered by senior defensive end Malik Fall. The offense would go three-and-out and a missed field goal would reset the game. The ensuing drive for Missouri Southern State was a quick one, as they got into the end zone on a 31-yard pass in just over three minutes to take a 7-0 lead.

Washburn’s offense settled in on the next drive, with nine rushes on 11 plays ending in a two-yard rush by senior running back Zach Willis to tie the game. A quick stop by the defense and a 25-yard run by sophomore running back Taylon Peters setup freshman kicker Trenton Brehm for a 34-yard field goal, giving Washburn a first quarter lead.

The Ichabods offense took to the air in the second quarter, as junior wide receiver Peter Afful beat his defender down the right sideline and senior quarterback Mitch Schurig lofted the ball right into his hands for a 60-yard touchdown.

“We need to put up points, but then we got rolling, scored I think … 38 unanswered so we definitely got rolling on offense and played complimentary football, and you don’t do that without the defense getting stops and the special teams helping out,” Mitch Schurig said.

The Lions tried to answer quickly by going deep down the sideline, which was picked off by senior defensive back Marquise Manning for his team leading third interception.

The defense continued to make timely plays to keep Missouri Southern State drives from getting started, allowing Washburn to drive down the field before halftime and get into the end zone again. This time it was an 11-yard pass into the corner of the end zone to senior wide receiver Jace Williams from Schurig, making it 24-7 at the halfway point.

“They got that lead, we kind of bungled that first drive we had great field position but didn’t do anything with it and they came down to score, but then we played well that first half ended just like we wanted to. Then we came out in the third quarter and really played well,” said Head Coach Craig Schurig.

Out of halftime the Ichabods again had no trouble driving the ball downfield, as a 40-yard rush by Peters set up a one-yard quarterback sneak by Schurig, extending the lead to 24 points. Four plays later the Lions had a bad snap on a punt that resulted in the ball being fumbled out of bounds at the one-yard line. The short field allowed Washburn to get creative, handing the ball off the senior offensive lineman Colton Dunkle for his first career rushing touchdown.

“I have been lobbying for it for about six weeks now, I actually made a bet with my mom that I would score this season so I won that and now she has to buy me an iron set,” Dunkle said.

Missouri Southern State got on board again before the end of the quarter, on a three-play drive capped off by a 33-yard touchdown in the air to make it 38-14. A failed fake punt on fourth down by the Ichabods set up the Lions with good field position early in the fourth quarter. They capitalized on it, finishing the drive off with back-to-back passes of over 20 yards to get into the end zone again.

Both sides of the ball played conservative for the final ten minutes, trying to maintain possession and run out the clock. The soft coverage allowed Missouri Southern State to get into the end zone again, with just under two minutes left to make it a ten-point game. The ensuing onside kick failed, allowing Washburn to bring in backups and run the clock down under ten seconds to secure the 38-28 victory.

“(It was) Definitely emotional for me, knowing that I have been around Washburn forever, so just knowing that it is the last home game I get to play here,” said Mitch Schurig. “It is definitely tough to put into words how much this place means.”

Schurig finished 20 for 27 passing, good for 225 yards, his leading target was senior wide receiver James Letcher Jr. who hauled in eight catches for 73 yards. Afful also had 73 yards. On the ground Peters had 123 yards, averaging 11.3 yards per carry while Willis added 77 yards on the ground.

After finishing 9-2 Washburn’s postseason fate will be decided on Sunday, Nov. 14.

“Hopefully the right scores happen … we will score, watch and see if we have a shot and then go from there,” said Craig Schurig. “I would be real disappointed if we don’t get another game with these guys.”