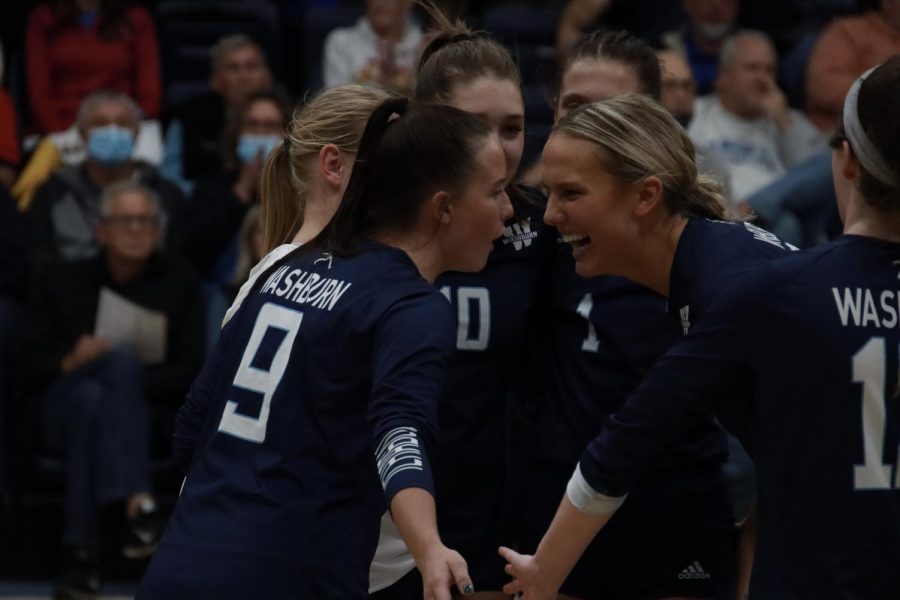 After a perfect 5-0 road trip Washburn volleyball returned home for a final weekend of action starting with a match against Missouri Western State University Nov. 12.

The Ichabods entered the match with a 16-2 record in conference play, and a chance to secure a share of the regular season title with a perfect weekend.

They wasted no time in the first set, jumping out to an 8-3 lead, spurred by three early kills by senior middle hitter Kelsey Gordon. The lead continued to grow, forcing the Griffons to take a timeout with the score at 13-4. Offense would continue to power Washburn, as its hit .475 as a team on its way to a 25-9 set victory. Senior middle hitter Allison Maxwell led the way with five kills while senior libero Faith Rottinghaus notched 10 digs.

“You hit like that because you are passing really well so I think that was big for us,” said head coach Chris Herron. “Our hitters were finding holes and finding hands, so it was just one of those nights for us where we did everything pretty well.”

The second set was more back and forth, as each team split the first 12 points. The stalemate would continue until the Ichabods reeled off four straight points to take a 12-9 lead, forcing a timeout. A strong middle of the set from senior outside hitter Genna Berg would push the lead to 19-13. Washburn’s defense was lights out down the stretch to finish off the set 25-15. Berg had five kills in the set while senior setter Allison Sadler recorded 13 assists.

“I think our block was really amazing, especially the second and third set. They really turned it up and were getting touches on every single ball,” Rottinghaus said.

Errors on Missouri Western State’s part helped the Ichabods in the third set, as the Griffons committed three in the first seven points to give Washburn a 6-1 lead. The Ichabods continued to play error-free with strong defense, leading to another Griffons timeout with the set at 12-3.

The team began to empty its bench as offense took over for Washburn late closing out the set 25-11 and hitting .531 as a team to secure a 3-0 match victory.

“It gives us a lot more confidence (to sweep) and kind of we just get to go into tomorrow with a big deep breath and just play the best we can,” Rottinghaus said.

Berg led the way with 13 kills, hitting .542, while Maxwell recorded 10 kills and hit .833. Sadler had 35 assists and neared a double-double with nine digs while Rottinghaus led the team with 18 digs as she sits just six away from tying the school career record of 2,464.

The victory moved Washburn to 25-3 on the season and just a half game back of the MIAA lead. To secure it they will have to get through No. 5 Northwest Missouri State who visit Nov. 13 in what will be senior day for the Ichabods, taking place after the match.

“The biggest thing is we want to try to take all of the emotion out of it before the game,” Herron said. “We hope the place is rocking and loud and obnoxious.”