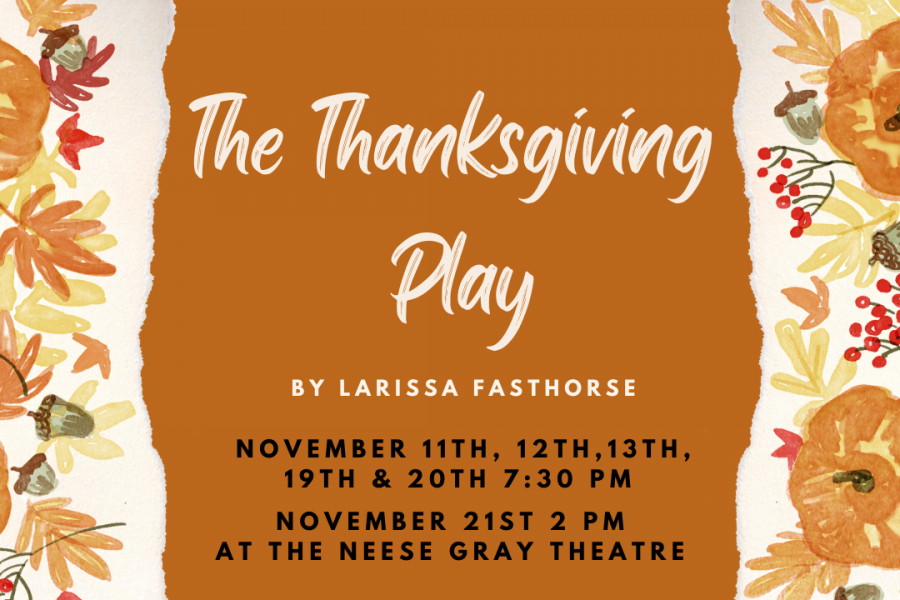 "The Thanksgiving Play" is a satirical comedy created by Larissa FastHorse. The show is about four white people trying to create a politically correct Thanksgiving production.

The Neese Gray Theatre was filled with laughter on Nov. 12 as audience members enjoyed “The Thanksgiving Play” written by Larissa FastHorse, a Lakotan playwright from South Dakota.
The play is a satirical comedy centered around Logan and her partner Jaxton, two white individuals, attempting to write a politically correct Thanksgiving play that honors Native Americans and remains appropriate for their middle school audience.

The team faces many obstacles along the way as their historical consultant, Caden, continuously reminds them of darker facts of past Thanksgivings that may not be well received by the kids or their parents.

The play rehearsal becomes even more complicated when Logan, Jaxton and Caden realize that the Native American actress from Los Angeles they hired isn’t Native American at all. Alicia was meant to be a cultural compass while writing a play for Indigenous people. What they are left with is four white people trying to make a politically correct play with no outside perspective and no one to play an Indigenous character.

The audience couldn’t get enough as the four actors went down a rabbit hole of what is and isn’t offensive. Their chaotic energy on stage left no room for dull moments as the play progressed. The characters built up a hilarious chemistry in their desperation to create a script.

While the show did address some sensitive issues, the actors made sure to stay true to the original message FastHorse had intended. “The Thanksgiving Play” is meant to shine a light on “woke” culture.

“At my community college I had read the play for an assignment. So, when I found out Washburn was doing it, I was really excited,” said Illiana Gallardo, the actress who played Alicia.

Many of the people who had helped with the show watched their hard work come together from the audience.

“My favorite part was putting together the fight scene at the end,” said Grey McCollum, freshman psychology major and assistant director. “This cast was fantastic! They are all such sweet people and so easy to work with. They just listen so well. I would work with them any time.”

All the work that was put into the show was acknowledged when the actors and crew received a loud round of applause from all who attended.
“I really love getting to know all the cast and crew. We just have a really good theater community here,” said Audrey Hentges, house management for the play. “Everybody is just super supportive of one another.”