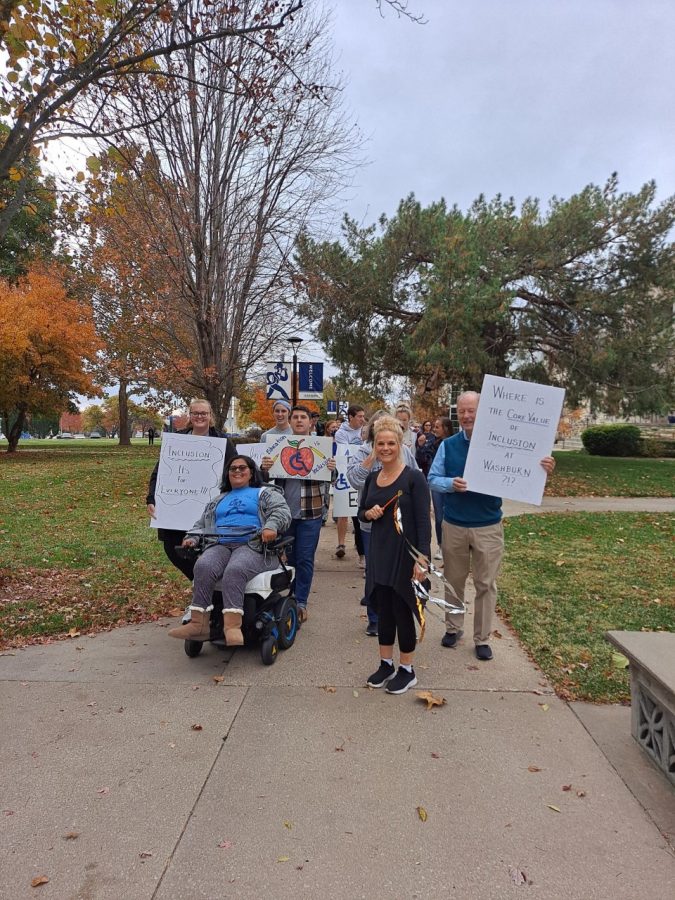 Daija Coleman leads the March on Inclusion around Washburn Campus to advocate for better accessibility into Carnegie Hall. The march took place on Nov. 10, 2021.

Education majors at Washburn are no stranger to the steep steps and historical significance of Carnegie Hall. The building is one of the oldest still standing on campus, but this presents a problem for students who have a physical disability and require accommodations.

Daija Coleman, a senior education major who uses a wheelchair, has had several issues accessing the building. Coleman decided to organize and lead the March on Inclusion to raise awareness of the inaccessibility of Carnegie Hall.

The march began at 10:30 a.m. Nov. 10 in front of Carnegie Hall, bringing in around 40 people showing their support for the cause. Many of the attendees were Coleman’s peers and faculty from the education department. Coleman began the march with a speech to those in attendance.
She explained that the idea for the march came when she had to choose a project for her senior capstone. Coleman didn’t know what to choose for her project until her mentor and former professor, Rick Ellis, died. She wanted the project to be meaningful and leave a legacy behind that she could be proud of.
“This is a longstanding issue here at Washburn. It goes so far beyond myself and the Washburn community,” said Coleman, who tied the march to Washburn’s motto, not for ourselves alone. “So, believe me when I say from the bottom of my heart, thank you for being here today on behalf of myself and the education department.”
The first stop on the march was in front of Morgan Hall, where participants chanted, “Inclusion for all,” while holding signs created by Coleman’s peers and the education department. The march continued down the sidewalk next to 17th street, heading toward MacVicar Ave. The parade participants received several honks and waves in support as they continued around the path of the school.
Hannah Pooler, a senior education major who uses a wheelchair, joined the march to advocate for herself and others with disabilities that make navigating the campus difficult. She has had a difficult time with Carnegie Hall as well.
“There are days, especially in winter, when I can’t necessarily get into the education building because it’s inaccessible,” Pooler said. “Washburn was always going to be where I got my teaching education, and the fact that it’s that much more difficult to get because I can’t get into the building is shocking.”
The participants made a stop in front of the Washburn Alumni Association and Foundation building while chanting “We want inclusion.” They made sure the staff in the building heard their voices from across the street before moving on to the Mabee Library.
“We teach our students, not only in the education department but as a whole, that the world is not your world and not just your experiences. The world is acknowledging the experiences of all people,” said Carolyn Carlson, education professor at Washburn.
After the march made its final stop at Mabee Library, it headed back to where it all began. In front of Carnegie, Coleman made a closing speech, showing her gratitude to all who attended.
“This is not a one and done. We will not be done any time soon if I have anything to say about it,” Coleman said.