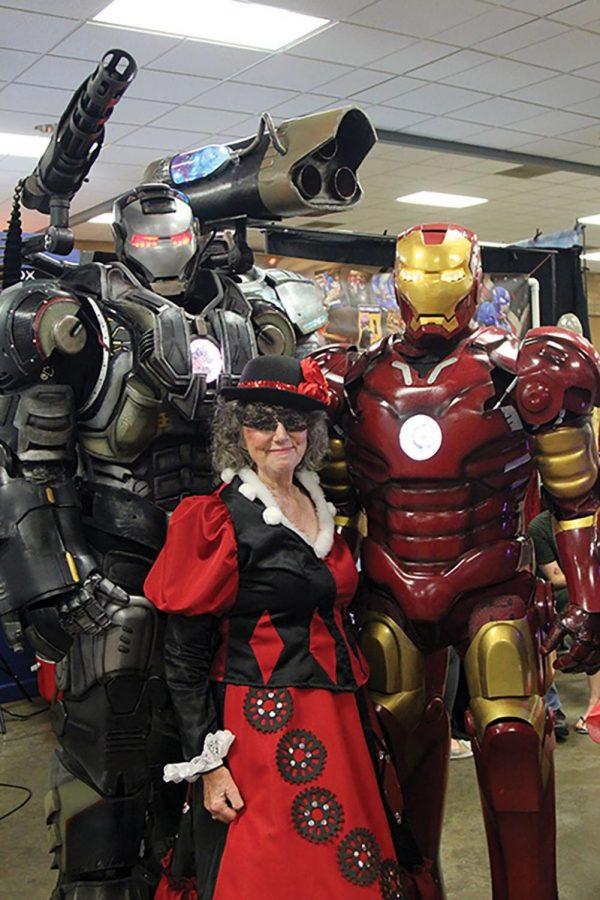 "Where's Jarvis?":  Michael, Christopher and Barbara Haze all represent the group called IBOT: Iron Brothers of Topeka. They are all involved in the Washburn community in some way or another. The best thing about going to these types of events are seeing the familiar faces.

Every year TopCon draws more than 2,000 geeks from near and far to show off their costumes, talk about their creations, sell products and have a fun time. Even more geeks simply come to see what people have brought to show.  Some may even work or attend Washburn University like Mike and Christopher Haze, and their mother, Barbara.

The Haze’s are part of a local organization called IBOT, Iron Brothers of Topeka. Taking their handmade costumes with them, the family members go to conventions like TopCon and show off their impressive outfits. They often have many other family members involved, including children and significant others, totalling three generations of family all working together. Michael was dressed in a red and gold Iron Man outfit while Christopher was dressed in a War Machine outfit. It’s hard to tell how tall they are outside of the costumes but they certainly towered over the crowd. Their suits even had working lights.

Christopher is a Washburn alumnus, having graduated in 2002 with a major in computer science. Barbara is also an alumna, having graduated in 1959 with a music education degree. She talked about being at Washburn prior to the infamous tornado in June 1966 and living in Benton Hall, as it actually used to be an all girls dorm. Michael, the middle brother of the family, works at Washburn as a maintenance technician with Facility Services.

Christopher gets his cosplay background from another group that had members at the convention called the 501 Legion, a Star Wars themed fan group. The 501 is from far and wide, not just Kansas, with members from all around the country. It is also connected to Rebel Legion, who has the same goals, except with a light side/good guy theme instead of 501’s dark side theme.

The members we spoke to talked about what their actual mission is. They go to conventions, events, even weddings (with a member once officiating a wedding as Emperor Palpatine) and they all do it non-profit. The only payment they accept is a donation to charity. They are coming to Washburn later this year on Oct. 15 for the Ad Astra Kansas Space Celebration. which will take place in Stauffer Science Hall.

The overall convention had many others in attendance as well. There were authors talking about their books, tables selling geek oriented custom replica items, comics, action figures and a multitude of other things.

TopCon provides a place for people to share their common interests and have fun. The props from groups like the 501 Legion and the Haze family give the convention character. It’s truly an epicenter of talent, creativity and passion. Kansas may be in the Midwest, but this convention proves that there’s always someone around to connect with through common interests and passions.