‘Predator’ series: An inconsistent but fun series of films 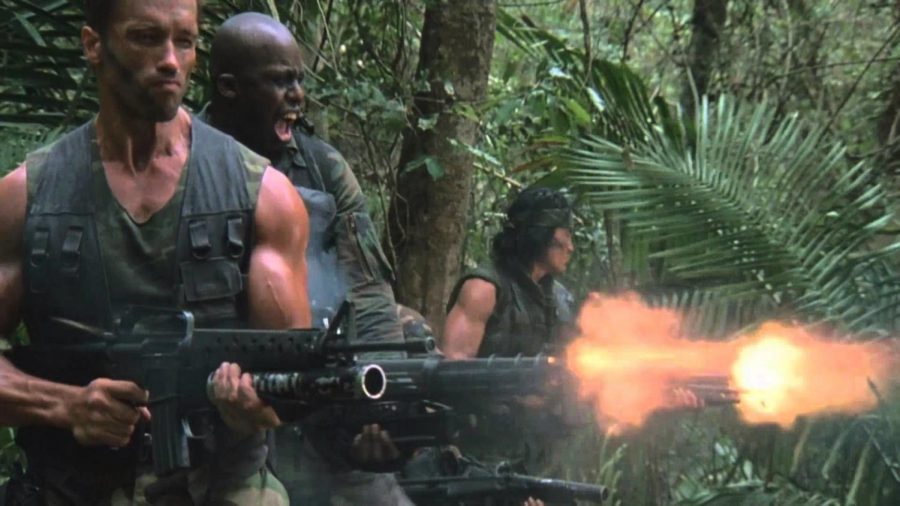 John McTiernan's Predator (1987)- an iconic film that started a franchise, and still remains one of the greatest action films ever.

With the fourth installment of the mainline “Predator” franchise, “The Predator,” coming out Sept. 14, 2018, it’s a good time to look back at the previous installments, not including the two “Alien Versus Predator” films. From the iconic first installment, 1987’s “Predator” to the series’ latest film, the franchise is still going strong.

“Predator” is generally considered one of the best films ever, and it is directed by action film legend John McTiernan, the director responsible for classics such as “Die Hard,” “The Hunt for Red October” and the criminally underseen, “Last Action Hero.” “Predator,” of course, stars juggernaut actor Arnold Schwarzenegger, who leads a perfect cast of commandos, including Carl Weathers, Bill Duke, Jesse Ventura, Sonny Landham, Richard Chaves and Shane Black. The titular Predator is played by Kevin Peter Hall.

The story is set in a fictional area of Central America where the team is sent to find a hostage when the Predator quickly shows up and carnage ensues. It definitely makes one of the most testosterone-fueled films ever, and it also has some of the most all-time iconic scenes in cinematic history. The core camaraderie also makes it worth mentioning. The muscle arm wrestler or handshake scene is the perfect example of this, as well as the chopper scene with “Long Tall Sally” by Little Richard playing in the background.

Another thing this film has going for it is the tight plot. It is simple, tense and incredibly effective. Perfect amount of exposition, and perfect pacing overall, all with a bombastic score by Alan Silvestri, who would later compose the Avengers theme.

In my opinion, it is one of Schwarzenegger’s best performances. All of these musclebound, hardened military commandos are no match for this alien predator, who can see infrared light and violently slays anyone in its path. This film really is iconic, and it has a special place in my heart for good reason.

“Predator 2” is a different story. Set in Los Angeles sometime after the events of the first film, this one finds a Predator hunting people in an urban city, causing just as much, if not more, carnage than the first predator did in Central America. At the same time, there is a war going on between Jamaican and Colombian drug cartels with one of the investigators being Lt. Harrigan (Danny Glover).

I had never actually seen this film until now. Arnold Schwarzenegger was always my hero as a child, and he still is, and I didn’t see the appeal in a sequel without Arnold. Kevin Peter Hall plays the predator in this one as well with notable additions in the cast being Gary Busey, who plays a strange DEA agent, and Bill Paxton as Detective Lambert. The central cast is absolutely not as strong as the first’s, though I love Bill Paxton. In fact, just like Schwarzenegger, he is one of my favorite actors, but he is criminally underutilized. Glover gives a fun performance as an annoyed and angry cop trying to decipher the current drug war, but that’s where the film really shows weakness.

It really isn’t fair to compare “Predator 2” to the original because of its universal love and acclaim, but it really needed a tight, focused plot like the first did. It really had some uninteresting stretches for men but I always love a Predator, with his cool gear and armor, killing people with strange weapons, so you definitely get some more of that. The film also has a very fun atmosphere to it. It feels like some 90s action comic book. Overall, the drug war plotline doesn’t resolve well, and the overall script needed a better focus. That being said, I absolutely loved the last section of the film between Glover and the Predator, a callback to the Schwarzenegger v. Predator finale of the first. The setting and idea of the sequel is fun, but it really needed a better script as the whole gang-war story could have been much better.

Then there is the 2010 film, “Predators,” with a big cast including Adrien Brody, Alice Braga, Mahershala Ali, Danny Trejo, Topher Grace, Ken Watanabe, Oleg Taktarov, Walton Goggins and Laurence Fishburne. The plot follows a group of soldiers and citizens who get dropped into a jungle, which may not even be on Earth, filled with predators and other creatures. This film is definitely a return to form for the films, and it definitely adds a lot of fun and interesting elements to the mix. Brody does his best to be one of the badass soldiers from the first film, but I really think he was miscast. He really doesn’t look the part, and while he had some fun moments, he had some lines that pulled me out of the experience. I feel like someone else really should have been the lead. He had me liking him at the end, but Brody doesn’t suit the role, good actor or not.

While the film has a great cast overall, some of them are underutilized. Mahershala Ali wasn’t as well known in 2010 as he is now, but they really wasted him as he doesn’t have much material or screentime. The same goes for Trejo. Braga’s character is written in the same trope that every Michelle Rodriguez character ever follows. There are also many callbacks to previous movies in the series. I like some of them but I really didn’t care for most of them. If you go into this movie not expecting an amazing experience, there are many fun moments to be had. The finale is especially fun to watch, even if it has some derivative aspects to it, and I really preferred it over “Predator 2.”

Overall, my ranking of the first three films from worst to best would go “Predator 2,” “Predators” and then “Predator.” I really prefer “Predators” over the second in the sequel because it was more fun. The cast certainly doesn’t have a Danny Glover or a Bill Paxton, but its plot is much stronger than the second.

Now, there is Shane Black’s 2018 effort, “The Predator.” I was hyped for this film as I loved Black’s last film, “The Nice Guys” (2016), and the cast is absolutely perfect, including Sterling K. Brown, Trevante Rhodes, Olivia Munn, Boyd Holbrook, Keegan Michael Key, Thomas Jane and a few other really good choices. They are all actors that I adore, especially Sterling K. Brown, and just seeing the cast photo a year or two ago had that really discredit Shane Black. This film is very messy, but I still had a lot of fun with it. Don’t go in expecting an intense film like the original because this is fully a gore action film. I wish they showed more of Sterling K. Brown, but the central team was cast very well. I really enjoyed the banter going on. Brackett’s acting was stellar, and Rhode’s character, Nebraska, was my personal favorite. Holbrook is the leading man, but I really liked the whole team. I wish I could see more of them together. They definitely made the movie for me.

The problem I see with this movie is some aspects to the plot, and tiny plot holes you have to suspend your disbelief with. I won’t spoil anything, but Munn’s character, Dr. Brackett, somehow knows her way around several guns. She is supposed to be a scientist, and there is no indication that she should be so familiar with guns. There is also the matter of Holbrook’s character’s son, Rory (played by Jacob Tremblay), and his big role in the plot. I liked it at certain points, but there were times where his character was used pretty conventionally, like the quiet, but super smart boy gets involved with alien tech and is very good with the technology of it. I did love the Predator in this movie. Whenever one showed up in this movie, it really put that R rating to good use and let the beast wreak bloody havoc. The R rating is also used very well in the rest of the action too.

The fight scenes were all fun, and there was not a single one that had the hallmark jump cuts and shaky camera. That is something I appreciate thoroughly, as I can actually see the fun action occurring. Other than the strong characters and the fun nature of the movie, the plot could’ve been so much better. The core team carries this movie, and it is really unlike any of the other “macho man” groups in the films, and I want more of them.

Unfortunately, the ending was disappointing. It adds in fates of characters that were unneeded, and the last scene was purely sequel bait, but if you really look over the so-so plot, “The Predator” is a really fun film. The action, the characters and the comedy work well, and I really do think it is better than the two other sequels because of how strong the cast is.

All in all, I really do think every single one of the “Predator” films are worth watching. The sequels may not be as good as the originals, but I would be lying if I said I didn’t have a ton of fun watching them, no matter what their predecessor is.