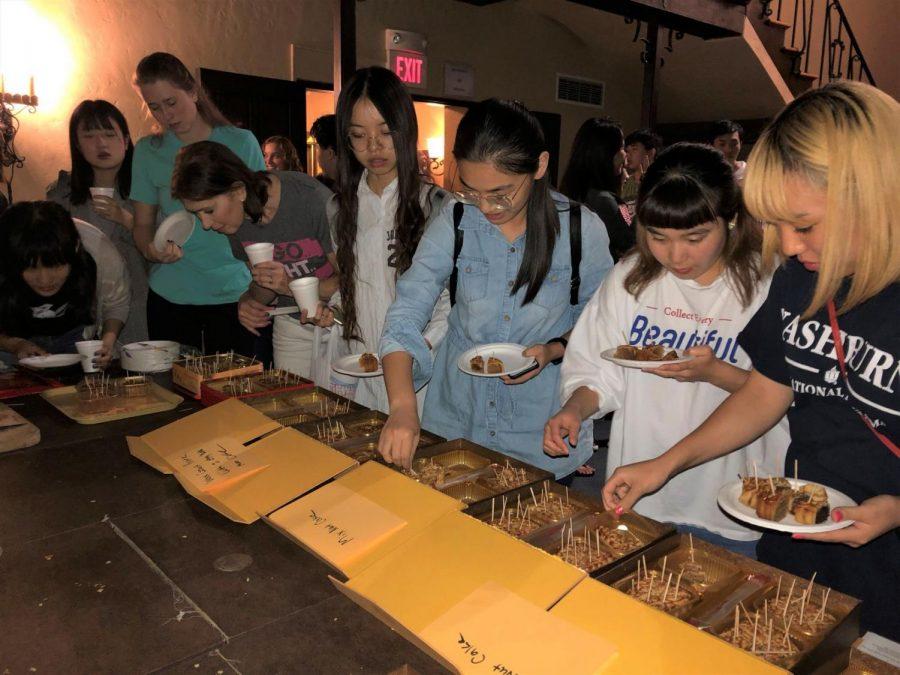 People from variety countries celebrate Mid-Autumn Festival in International House. People waited in line to get different flavors of mooncakes.

The Moon Cake and Tea Party was held in the International House of Washburn University from 8 p.m. to 10 p.m. on Sept. 24, 2018. The International Club organized this event to celebrate the Chinese Mid-Autumn Festival. People could have free tea and mooncakes while gazing at the full moon.

The Mid-Autumn Festival is a traditional Chinese festival. It’s held on the 15th day of August of the lunar calendar each year with a full moon at night, which corresponds to late September to early October of the solar calendar.

On the day of Mid-Autumn Festival, the moon is said to be the brightest and roundest over the whole year. The shape of the full moon is a metaphor of reunion with family and friends. People gathering together is the main reason why people think the festival is important. At the same time, people give thanks for the harmonious unions.

“It’s a complicated thing to go to the college in another country, but Washburn makes me feel like home with the Washburn family,” said Jiayi Zhang, a freshman student from China. “Everything makes us feel satisfied and relaxed.”

“People in Washburn are interested about mooncakes and the origin story of the Mid-Autumn Festival,” said Andy Vogel, a member of International Program. “It’s cool that people from many cultures celebrate a holiday from another country and focus on different cultures.”

Washburn University has a rich history dating back 150 years. The university was founded in 1865 by members of the Congregational Church on the principle that all people – regardless of race, ethnicity, gender or family income – have the right and access to earn an education.

The university offers an opportunity for people from different regions with different backgrounds to study and gather together. There are more than 270 international students at Washburn University and Chinese students are a large population among them. The Moon Cake and Tea Party made people get around and celebrate the festival with Washburn family.

“We have tremendous support from the university that the International program provided everything we wanted to hold the event,” said Vogel. “It’s a perfect situation that we have all the resources, and everybody feels excited in the event.”

People could have free mooncakes and tea at the party.

Vogel went to Kansas City to buy the mooncakes for the event with other colleagues.

“We searched around Kansas for the best mooncakes people can have,” said Vogel.

“My favorite mooncake flavor is the mixed nut,” said Darlene Eslick, the host family of a student and invited by the student, “it’s the one has much flavor, though many Chinese people don’t like it.”

The lotus seed paste with egg yolks mooncakes are more popular among Chinese people, while American like the mixed nut ones more.

“Egg yolks mooncakes are special, but the mixed nut mooncakes are simple description,” said Andy. “The filling consists of walnuts, pumpkin seeds, sesame seeds, fruit, rock sugar and so on.”

Typical mooncakes are round pastries and eaten in small wedges accompanied by tea. Most mooncakes consist of a thin, tender pastry skin enveloping a sweet, dense filling. There may be one or more whole salted egg yolks in their center as the symbol of the full moon.

Another part of the festival celebration is moon worship.

“It’s important to look at the full moon with family and friends,” said Vogel.

Thy myths associated with Chang’e, known as the Moon Goddess of Immortality, explain the origin of moon worship.

Houyi was an excellent archer in the ancient past. His wife was Chang’e. One year, the ten suns rose in the sky together and brought great disaster to people. Yi shot down nine of them and left one to provide light. An immortal admired Yi and sent him the elixir of immortality.

However, Peng Meng, Yi’s apprentice, knew this secret. On the 15th of Aug. in the lunar calendar, Meng forced Chang’e to give him the elixir. Chang’e refused to do so and swallowed it. She flew into the sky and took up residence on the moon, so that she could live nearby her husband.

After Yi came back, he displayed the fruits and cakes Chang’e liked in the yard. People soon learned about these activities. They participated in these rituals with Yi because they were sympathetic to Chang’e.

The origins and history of Chinese Mid-Autumn Festival dates back to the Zhou Dynasty over 3,000 years ago. It’s become a festival since the Song Dynasty (960 – 1279).

Nowadays, many old traditional activities are disappearing from the Mid-Autumn Festival, but new trends have been generated. It’s become a public holiday in China when people can escape work or school on the day. People at all ages celebrate this old festival together.

People not only ate mooncakes and gazed at the moon, but also played games at the party.

“I love playing games, which is my favorite part of the event,” said Eslick. “It’s very fun to have such activities in the building of International House.”

The traditional games around the Mid-Autumn Festival relate to flights of the soul, spirit possession or fortunetelling. Some typical games and activities are “Ascent to Heaven”, “Descent into the Garden”, “Descent of the Eight Immortals” and “Encircling the Toad.” These games originate in the Guangdong Province of China.

The tradition Mid-Autumn Festival is not only celebrated by Chinese. Many countries have similar festivals on the same day, though named in different ways, such as Vietnam, Japan, North Korea and Thailand.

“Many people from Asia, like Japanese, also celebrate the Mid-Autumn Festival in kind of Chinese way with similar Chinese rituals,” said Vogel. “The rituals went through out the giant Chinese dynasties in the past ancient days.”

The festival is not only in Asian areas anymore. Like at Washburn, people celebrate the festival in a different country with other people from different religions. At the same time that people knew about Mid-Autumn Festival, they also learned a variety of cultures through the communication with others.

“The event makes students know each other very well and build relationship with friends,” said Zhang. “I will come to the party next year with my new friends.”

The Moon Cake and Tea Party offered the opportunity for people around the world to know about the traditional Mid-Autumn Festival. People also made new friends and learned about cultures from other countries in this event. Everyone at Washburn are welcome to the annual party to try the sweet mooncakes.