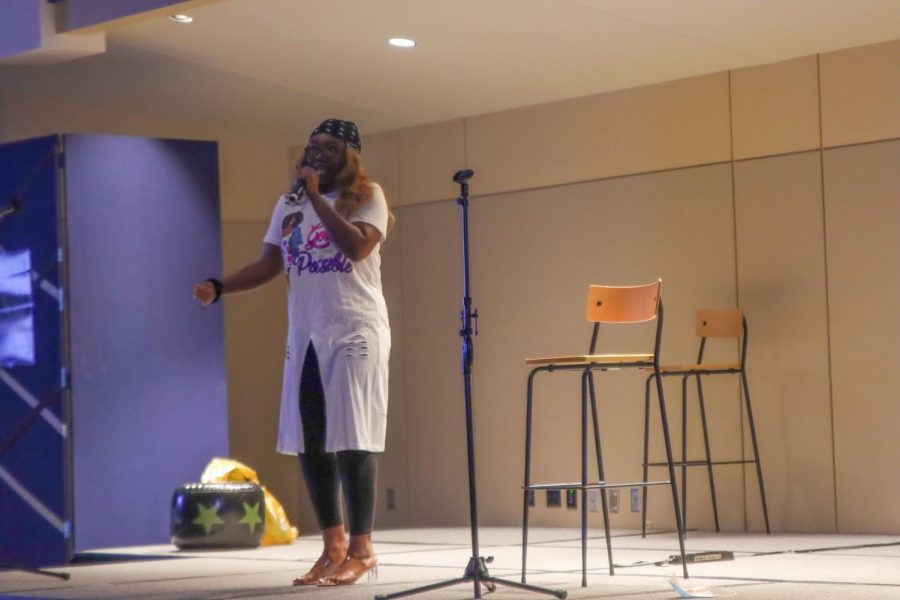 Michelle Sawyer sings with conviction at Open Mic Night on Oct. 26, 2021. in the A/B room in Memorial Union. She placed first in the event.

Washburn Student Government Association organized the Open Mic Night event as a part of homecoming week 2021 at Washburn A/B, Memorial Union on Tuesday that allowed students to showcase their talents.
The Open Mic event was hosted by First-Year Experience Librarian, Stephen Woody. The panel of judges were Joseph Tinsley, director of admissions; Robert Coffelt, lead graphic artist for U.M.A.P.S. and Christa Smith, interim director of strategic analysis and reporting. Results were announced for the first, second, and third-place winners.
The event was never short of excitement with eight amazing performances and applause from more than 100 students supporting their peers. The performers of the open mic night were Mia and Payton, Bailey Corley, Jack Benedict, Michelle Sawyer, Toynce Jackson, Sierra Jeter, Haley and Marin, and Reese Owens.
Michelle Sawyer from Black Student Union won first place, and was the recipient of a $50 Texas Roadhouse gift card. The audience gave her a standing ovation for her powerful voice. Playing guitar, Jake Benedict from Kappa Sigma won the crowd as he performed “Yellow” by Coldplay. He was rewarded a $25 gift card for second place. Mia Weiler and Peyton White from Alpha Phi took home a $15 Starbucks gift card for their performance of “Take a Hint”.
Michelle Sawyer, a sophomore majoring in Pre-Dental and the winner of the Open Mic event said that she hasn’t sung in front of an audience like this since high school, and thought she was going to forget her lyrics as she shared her experience.
“This kind of event is a nice way to connect with other people. I have never seen any of these people in my life and talked to them. Now I have a new face in the hallway that I can say hi to,” Sawyer said.
“The show was wonderful, and the best thing was, of course, they are amazing performers that all came out and shared their talents,” said Megan Arianna Dorantes, a junior majoring in Public Administration. “I enjoyed the surprise acts. It is always nice to see something unexpected and have it be amazing.”
Edited by:- Simran Shrestha
Edited by Ellie Walker