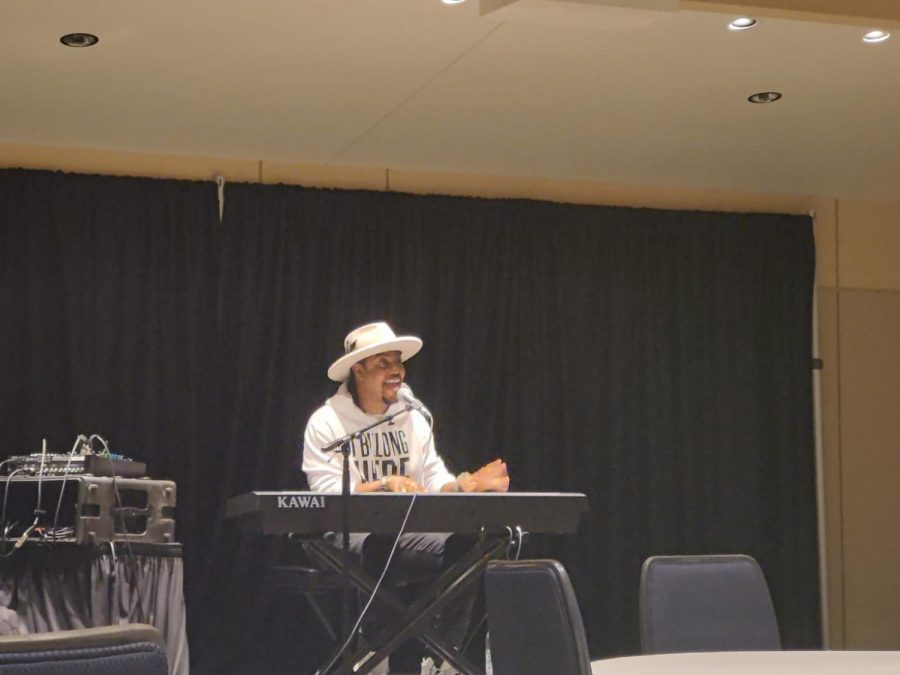 In motion: Rudy Currence performing his new song "I belong Here" on Nov. 3, 2021. The event was organized by CAB and OSID.

Rudy Currence is an award-winning singer, Grammy nominated songwriter and Grammy and Dove award winning producer. Since the age of 12, Currence has been exploring song writing along with being well versed on the piano.

Currence’s music effortlessly transcends barriers of age and genre as he continuously inspires fans all around the world with his music. His evolving repertoire can be described as hybrid, as he authentically transitions between r&b/soul, jazz and gospel music with seamless ease and proficiency. An acknowledged fan favorite amongst students and faculty alike, he frequently tours prestigious colleges and universities across the U.S. He released his new single album “I Belong Here” during the pandemic, which reached number one on Billboard for more than two consecutive weeks.

Currence was invited to Washburnto perform on Nov. 3. The event was organized by the Campus Activities Board and the Office of Student Involvement and Development. The event was held in the A&B room of the Memorial Union.

Currence set the environment inside the A&B room with his songs like, “No Greater Love ” and “Here With You”. Currence’s elegant piano playing gave goosebumps to everyone in the room. Currence and one of the students even did a duet on his song, “More Than You’ll Ever Know”. Throughout the event Currence was constantly interacting with the students and teachers. He even used their names to make new songs, and the crowd enjoyed that creativity. Currence ended the event beautifully with his latest album’s song “I Belong Here”. After the event Currence was calm and humble when hanging around to talk and take pictures with everyone.
“I had a great time here. I enjoyed performing for the students. Music is my passion, it’s what I love to do and connecting with the students through music is magical. I would love to visit Washburn again,” Currence said.

The same sentiment was shared by students who attended.

“I really liked the event. I don’t really do gospel, but my friend brought me, and I really enjoyed my time here. His vocals were amazing,” said Elona Cottner, a freshman business major.

Not only was the music enjoyable, but it also left a big impact on some.

“I loved every second of it. I was crying, it was very moving, and it meant so much to me,” said Karmen Bower, a sophomore physics major.