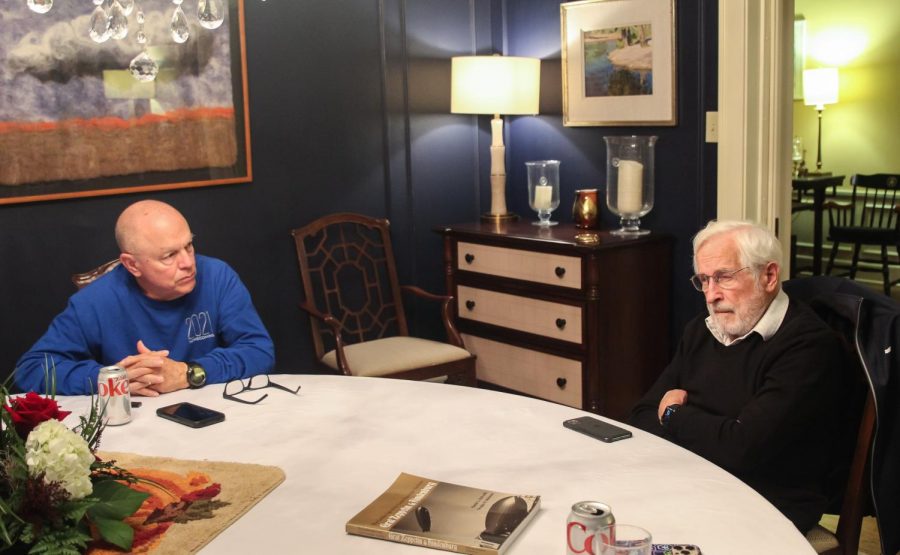 Legacy: Dr. Paul Kindling (right) and Hal Dick (left) discuss their experiences as sons of Hindenburg engineers. This past Sunday, Oct. 31, 2021, these two men with remarkable life stories were invited over to the Farley's to share their experience.

The Hindenburg, infamous for its destruction, was a commercial flying rigid-airship built by Goodyear and German manufacturer, Zeppelin. Hindenburg only flew for 14 months, and during that time, Harold Dick Sr., American engineer and Goodyear employee and member of the U.S. Navy, was present on all but two flights.

Not only was Dick Sr. the only non-Zeppelin employee on the crew of the Hindenburg, but he was also the father of Washburn Alumni, Hal Dick Jr.

Dick Jr. stayed as a guest at President Farley’s home recently. On Sunday, Oct. 31, 2021, the Farleys also invited Dr. Paul Kindling, retired surgeon and personal friend of the Farleys, as well as the son of Paul Kindling Sr, a German engineer employed by Zeppelin, who was also very involved with the Hindenburg.

Kindling Sr. was always fascinated with aerodynamics; Kindling Jr. shared that passion, so much so that he studied aerodynamics at a technical school and got an engineering degree before being hired by Zeppelin at the suggestion of his aerodynamics professor.

Of the two flights that Dick Sr. missed, the disastrous trip from Frankfurt, Germany to Lakehurst, New Jersey, was, fortunately, one of them. It was because the president of Goodyear at the time, Paul W. Litchfield had called him into England to meet as well as witness the coronation of King Henry and Queen Elizabeth.

As the only American Goodyear employee present throughout the Hindenburg project, Dick Sr. had impressive qualifications; during his time at Goodyear he spent years designing and engineering other similarly big rigid airships, the Akron and the Macon. He also earned his free balloon and dirigible pilot’s license, meaning not only could he build and fix the blimps, he could pilot them as well.

Dick Jr. noted that the pilot’s licenses are signed by none other than Orville Wright, one half of the famous Wright Brothers, the two men credited with creating the world’s first motor-operated airplane. These licenses and the rest of Dick Sr.’s extensive collection from his time working on the Hindenburg are available through Wichita State University libraries special collection, and are also accessible in a digital exhibit.

During his stay in Germany from 1934 to 1939, Dick Sr. managed to attract some unwanted attention as not only an American, but also an officer in the U.S. Navy during a rising of tension in Germany that would soon lead to World War II.

“He attracted a lot of attention from the Gestapo. That’s the most polite way I can put it.” said Dick Jr. “On two separate occasions, they rousted him out in the middle of the night, and he wasn’t sure he was gonna live to see the next day.”

On the flip side, Kindling Sr. was offered a job in America in 1930, the same year his son, Kindling Jr. was born, so he moved the family to America briefly. During this time, the Akron and the Macon blimps were being built, and Kindling Sr. was allowed on their test flights, though they were U.S. Navy airships.

As tensions rose before the start of World War II in 1939, Kindling Sr. had long since been back in Germany with his family working on the Hindenburg for Zeppelin. And in April of 1945, at the tail end of the war, he and his family witnessed the bombing of their hometown.

“The bombs were next door and across the street had killed those left across the street. First time I saw a dead person, and the town was destroyed,” said Kindling Jr. “We were lucky to get out.”

Being able to share these stories with someone who understood and had similar experiences was cathartic for both guests, as each enjoyed the experience. They shook hands, exchanged numbers and thanks, and departed with the promise to keep in touch.