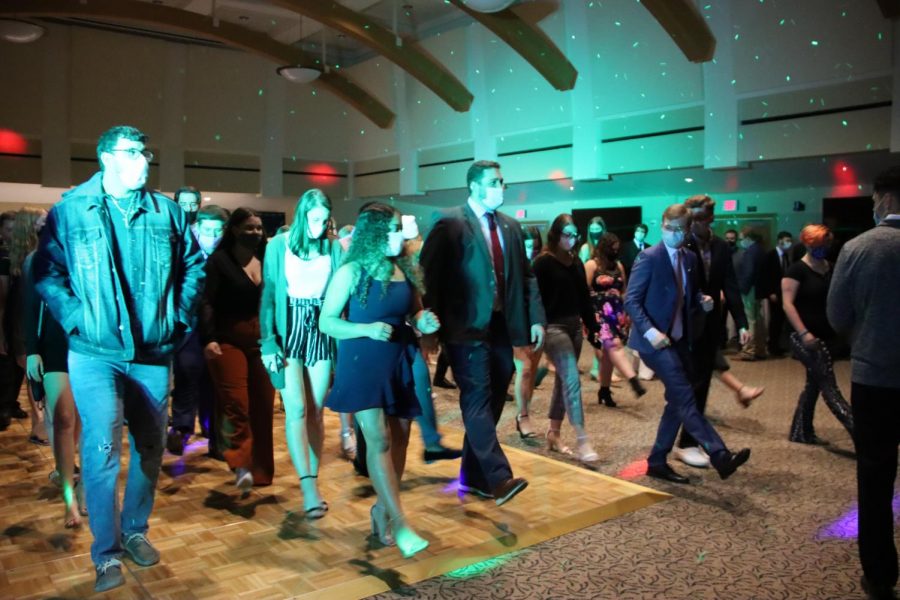 On Monday Oct. 25, Washburn Student Government Association hosted the Homecoming Bash in A&B of the Memorial Union. The theme was the Roaring 20s. On that night they announced the nominees for Top Bod. They also had a dance floor where students could dance, a photo booth machine, food and drinks and raffle prizes throughout the night.

There were a total of ten candidates for Top Bod. They announced them one by one and said who nominated them. After everyone was announced, they brought the nominees on stage, said who nominated them, what they are majoring in and listed each of their accomplishments. They all got a present when going onto stage. Throughout the week the nominees for Top Bod are wearing pins with a ribbon.

There was additional excitement behind the events this year after last year’s homecoming was cancelled due to COVID-19.

“I was really happy to see everyone again and was able to go. I have not been since my freshman year because of COVID-19,” said Tierney Kester, a senior criminal justice of forensic investigations, anthropology and philosophy student.

Music was a big part of the event, and many of the songs played got strong approval from the audience.

“My favorite song they played was probably “Wobble” because I really like dancing to it,” Kester said.

Since they were not able to have a homecoming last year, WSGA took the idea of last year’s theme and used it this year.

“Due to COVID-19 last year being ultimately decided to just stick with last year’s theme for this year,” said Ariel Smith, special events director of WSGA.

With this being the first dance for Fall of 2021 it was uncertain how many people would come, making the planning a little more difficult.

“I planned for 200 students but when we counted it up at the end of the night there were actually 250 students that had come,” Smith said.

The event was a long time coming for WSGA as they had been planning for the past six months.

“I had an idea in my head how I was going to decorate it but once I ordered the pieces and was setting it up last night it was amazing to see it in real life,” Smith said.

Walking across stage: Senior Cheyanne Colwell is announced at Homecoming Bash and one of the Top Bod nominees.