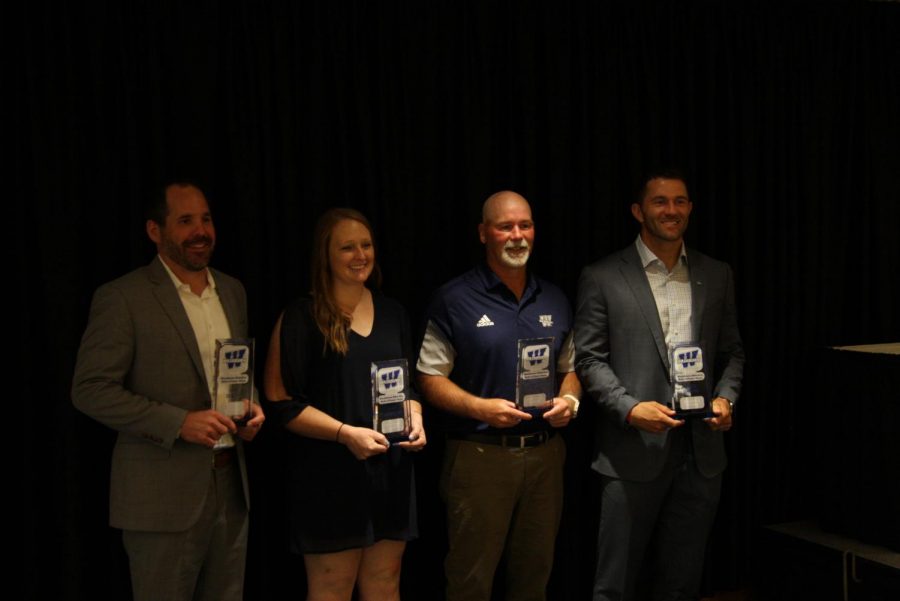 On the morning of Oct. 9 friends, family and faculty alike gathered in the Washburn A/B room of the Memorial Union for induction of the 2021 Washburn Athletics Hall of Fame class.

Before introductions and speeches were made, breakfast was served to all who attended, and the processions commenced shortly after.

Some of the inductees were unable to attend in person and so a zoom call was projected on a wall next to the tables of onlookers. The full class of 2021 honorees included six members:

Matt Hutchinson, director of development at Washburn, along with Loren Ferré, director of athletics, followed by President Jerry Farley spoke to the crowd with excitement about the class before introducing the honorees.

Most members of the class had someone to introduce them individually and share stories about their experiences. These ranged from former teammates and coaches to teammates.

First was Hastings who, after being introduced by his parents, spoke over zoom about his journey from joining the football team as a walk-on to ending top ten in Washburn history for receiving yards, receptions and receiving touchdowns.

“I want to thank coach (Craig) Schurig for taking a chance on me back in 2005. I had no offers and I knew I wanted to play football. I didn’t know how, I didn’t know where, I thought I might want to walk-on at KU or K-State you know but Washburn was the best decision I made … I couldn’t have picked a better spot,” Hastings said.

Next Stutz, also over zoom, spoke about what Washburn meant to him for his career and family and the pride he had playing for the school and still takes in representing it.

“I can obviously thank my family, my mom and my dad, for everything they have done for me and my wife was with me all of the time at Washburn. We got engaged in my last year and married shortly after my last year and have been with me ever since, so that’s obviously been special,” Stutz said.

Following him was Sissom who had many people around the room to give shout-outs too because of his time spent in both the football and baseball programs. Sissom spoke about the fond memories he has of connecting with teammates and the athletics staff from his time at Washburn.

“I wanted to play two sports. I wanted an opportunity to do that, and Washburn was the only school that gave me that opportunity,” Sissom said. “It’s a great class to come in, there are so many people to thank at Washburn so, thank you.”

Next to the podium was Watkins who is still active around the school, serving as the football team’s co-defensive coordinator. He spoke about his journey that led him to Washburn and some of his experiences as a student-athlete.

“My teammates, all my best friends, all the guys at my wedding. Joe (Hastings) was the best man at my wedding, and I was at his. It means a lot to go in with one of your best friends who also walked-on the same year,” Watkins said. “Washburn has given me so much. It has given me relationships, gave me memories and gave me my career that I love.”

After being introduced by current volleyball Head Coach Chris Herron, Hampson took to the podium and shared stories about her time playing at Washburn and what the relationships and memories she created meant to her.

“My experience here at Washburn was truly amazing and I can’t thank everyone enough for everything that they did for me. It’s pretty cool that I get to be a part of Washburn Athletics history forever. I still don’t think I truly grasp that,” Hampson said.

Finally, Cahill shared his journey that led him to Washburn, some of the obstacles he overcame while playing and what it has been like to see the football program and school grow since his graduation.

“Washburn University, playing football here has meant everything to me in my life, I wouldn’t trade one thing about my experience here,” Cahill said.

Ferré returned to the front to congratulate all of the inductees as well as lob some jokes in each of their directions before thanking everyone and encouraging them to come support the current athletic teams in the rest of their seasons, including the football game that afternoon where each would be recognized at halftime.
Edited by Ellie Walker
Edited by Simran Shrestha