Top Bods blow the crowd away 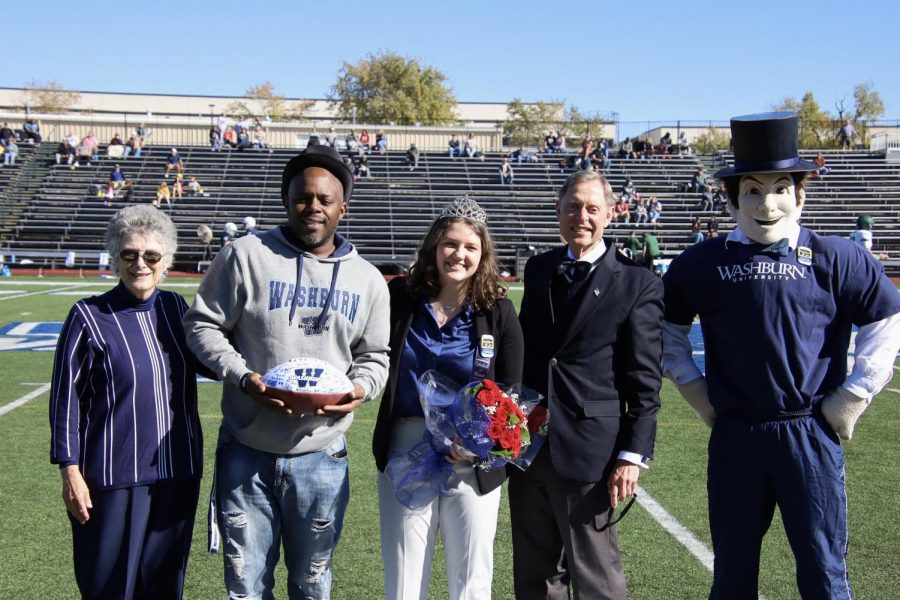 The 2021 Top Bods were crowned this past Saturday, Oct. 30, 2021. The winners were WSGA candidate Shayden Hanes and Charles Dilliehunt III from the Sigma Phi Epsilon Fraternity. Though Dilliehunt was unable to make it to the game for the live announcement, both winners were ecstatic and blown away by the Washburn student body’s choice.

“I’m excited and very grateful for my friends at Washburn, truthfully,” Hanes said. “I am the most shocked, I think, of anyone!”

Hanes is currently a junior double majoring in international business along with marketing and finance, with a double minor in political science and leadership studies. Hanes also serves WSGA as director of campus and community affairs, meaning that she plans and helps coordinate events for the student body on campus.She spearheaded the Can Emporia event and coordinated with the student government at Emporia University to make the event happen.

Dilliehunt is a senior majoring in social work and has been a proud member of Sigma Phi Alpha ever since his freshman year at Washburn. Dilliehunt was unable to attend the Homecoming game due to his previously made commitment to running a half marathon, a feat he has been training for over the course of a year now. When he did finally find out over the Washburn radio where they broadcast commentary of sporting events, it was after he had crossed the finish line.

“I didn’t hear them announce it, but I heard after they came back from a commercial and said like, ‘Congratulations to Charles Dilliehunt and Shayden Hanes,’ and then every single group message that I’m in was blowing up after that,” Dilliehunt said. “It was right after I had just run 13.1 miles and I was like… oh, I want to be super excited, but I can not move.”

Dilliehunt’s plan for the future as a social work major includes pursuing a master’s degree and going on to work with high school and middle school aged students to help encourage them and support them in their pursuit of higher education. He recognized this as an issue he was passionate about from his time working at the Boys and Girls Club.

“I just want to be a walking resource for kids,” Dilliehunt said. “I knew kids that had great potential but just didn’t have that boost of encouragement or just that accountability (or) person there that they could talk to.”

As a Washburn student of three years now, Hanes has several fond memories of her time. Those included winning Can Emporia for the first time in quite a few years,as well as traveling to Switzerland recently to present at an international business conference. She also cherished her time last year being the RA for the leadership hall, and her entire time so far as director of campus and community affairs.

Hanes had some advice to share for anybody hoping to run for Top Bod in the future.

“Just be authentic to yourself. Surely, at the end of the day, I think if you’re serving Washburn, that’s really all that matters,” Hanes said. “That’s really what we’re here to do is help each other.”

Both Hanes and Dilliehunt seemed to have a similar outlook on their success. They were not in the contest for popularity, and neither did they advertise themselves or campaign during the voting. Both winners also agreed that throughout the nomination process, they were focused on authentically projecting themselves, and both agreed that their win meant all that much more because they won by being themselves.