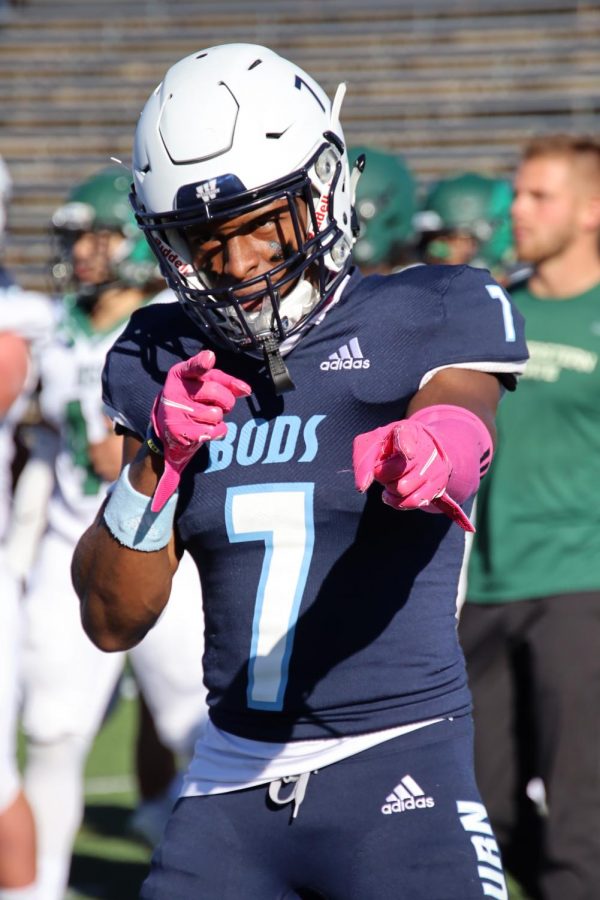 Riding a three-game winning streak, Washburn football was set for a homecoming day matchup against Northeastern State University. While the Ichabods were riding high at 6-2 on the season, the RiverHawks were in the opposite situation, entering the afternoon with a 2-6 record.

Washburn took the kickoff to begin the game and did not look back on the opening drive, scoring in under four minutes on a 39-yard touchdown pass from senior quarterback Mitch Schurig to junior wide receiver Peter Afful. A botched snap would derail the next offensive drive for the Ichabods, but the defense would hold strong, holding Northeastern State to only five yards of offense in the first quarter.

“We just play sound and disciplined, you know we don’t have to take any risks,” said senior defensive back Marquise Manning. “We can just sit back and play our game.”

After driving down to the one-yard line on its next drive the Washburn offense was pushed back to the 18 after penalties and sacks. The third and 18 play was no problem for freshman tight end Matthew Simmons as he reeled in a pass from Schurig to make it a 14-0 game before halftime.

“I came back and I ran a corner route so it was just wide open, I was just sticking to what I know,” said Simmons.

After another three and out forced by the defense the Ichabods offense was on the move again. This time getting into the end zone in under two minutes with another pass to Simmons, this time from freshman quarterback Kellen Simoncic to make it 21-0. The next RiverHawks drive was stalled in Washburn territory thanks to penalties and a sack by senior defensive end Malick Fall.

The ensuing drive for the Ichabods emphasized the rushing attack, which is how it would end after senior running back Zach Willis got into the end zone from five yards out. Washburn’s defense would continue to stifle Northeastern State’s offense, leaving them scoreless after three quarters.

In the fourth quarter the Ichabods began to work in players off the bench to give them an opportunity with the game out of reach.

“That is a secondary thing when your starters get some rest, but getting those guys in the game cause those guys work hard … it was fun getting them in. I wish there would have been more time,” said Head Coach Craig Schurig.

The first time they had the ball they got to the end zone again, this time it was freshman running back Tyler Bowden who punched it in from four yards out to make it 35-0.

The defense would hold Northeastern State scoreless for the rest of the game as the clock expired and Washburn completed its first shutout since 2013, moving to 7-2 on the year.

“It was a total team effort but anytime you get a shutout that’s a big deal,” said Schurig.