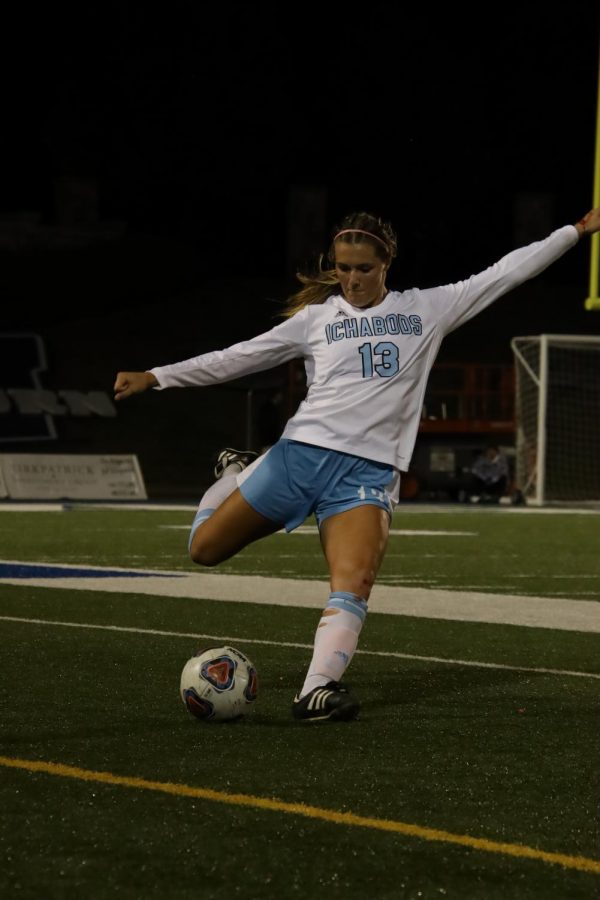 Dynamic: Washburn defender Carlee Thompson kicks near the sideline on Oct. 29, 2021. Thompson finished the match with one shot on goal.

Senior midfielder Mackenzie Menke stole the show with her stunning free kick goal that outmaneuvered the wall and turned the goalkeeper into a spectator. It was the second time Menke has scored from outside the box in the last three games.

Led by senior midfielder Tera Lynch, with seven, and freshman forward Khloe Schuckman, with six, Menke has joined six other Ichabods so far this season in outscoring opponents 23-19.

Those numbers are important to provide perspective as to what the Washburn backline did in particular for this win. Two Hornets players, Mackenzie DiMarco & Hannah Woolery, between them have scored 24 goals this season, but were shut down on Friday.

“We can play with anyone. For us, it’s just about winning those defining moments,” said Head Coach Davy Philips.

There was a moment, later in the game, that the Ichabods could have easily turned into a defining moment, as a spilled catch by the Emporia State goalkeeper dropped to three Washburn players feet. Somehow, it didn’t get blasted through the net. Thankfully though for the Ichabods, the Hornets didn’t equalize and create a sense of regret.

At the other end of the pitch was sophomore goalkeeper Raegan Wells, who saved a season high thirteen shots on target over the course of the game, six of which came from DiMarco & Woolery.

The players celebrated on the field at the end of 90 minutes and cheered each other. The old adage about gaining momentum before a tournament isn’t the only thing boding well for Washburn.

The Ichabods will travel 280 miles to Oklahoma City, Oklahoma on the weekend, for the first round of the MIAA playoffs against Central Oklahoma, taking place Sunday, Nov. 7.

15’ A nearly thrown-in goal by ESU’s center back that was flip-thrown in. Wells lept to shield the near top corner, and it was eventually cleared.

20’ ESU shot from the edge of the box, saved with a dive by Raegan Wells and out for a corner.

28’ GOAL: locked onto the target with a laser beam of a shot that streaked past the wall and into the part of the net the goalkeeper deemed safe from Menke’s capabilities. It was not safe. Washburn 1-0 ESU.

36’ A very fast and nearly accurate volley was redirected dangerously to Wells’ goal and it narrowly hit the top of the crossbar.

HT A fan is warned by the stadium announcer over the PA that air horns are not allowed. During an ESU free kick in the closing minutes of the first half, as the Hornets player was kicking the ball, a horn sounded out and got some laughs.

65’ Shocking missed chance by the Ichabods. The ESU goalkeeper spilt a catch and the ball bounced meanderingly along the white line, in front of three approaching Ichabods. There were no groans of a missed call or finger-pointing on the pitch.

75’ Referee is starting to take some heat from the visitors, after four consecutive fouls called on the Hornets in quick succession.

85’ An ESU attacker was in on and goal beat Raegan Wells to the ball, but with the first touch sent it wide of the vacant net.

87’ Another ESU attacker gets around Wells but the downfield momentum carries the ball out of bounds.