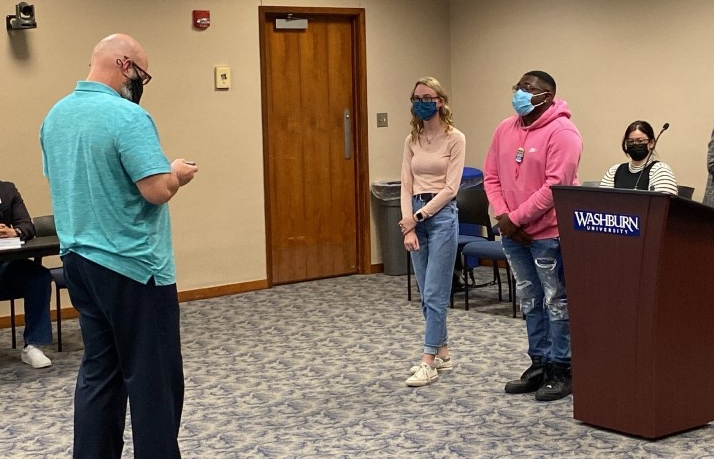 A Big Commitment: New senators Azarion Perkins (right), and Emma Teply (middle), are sworn in by Dr. Grospitch (left). The senate recently voted on their acceptance and they were allowed to sit with the rest of WSGA on Wednesday Oct. 10, 2021.

On Wednesday Oct. 20, 2021 the Washburn Student Government Association held their weekly meeting at 6:30 p.m. in the Kansas Room on the upper floor of the Memorial Union. For this meeting in particular, WSGA was allowed to dress down in an effort to get everyone to wear pink in support of Zeta Tau Alpha’s philanthropy week: Breast Cancer Education and Awareness.

Communications and Marketing Director Wyatt Carter reported that he has now posted all homecoming events on the Washburn website as well as WSGA’s social media. He also shared that WSGA is currently throwing a giveaway, which can be found on their instagram @yourwsga.

Megan Dorantes, diversity and inclusion director, reported that she is in the final stages of working on the next episode for the podcast “yourwsga”, and that she has been working with her committee to prepare for Native American Heritage Month, which will take place in November.

Legislative Director Adam Young and Budget Director Eric Rorstrom reported that they have been working to change some parts of the funding policy in light of the lengthy debate from the previous week’s meeting.

Vice President Dylan Babcock reported that he and President Abby Trautman recently met with Dr. Grospitch, WSGA Advisor Collier before President Trautman left for her trip. Babcock also reported meeting with a representative from Lyft to discuss details about the Safe Ride program.

SB 21-22 #048: Azarion Perkins Appointment, The Washburn Student Government Association voted on appointing senate applicant Perkins to the WSGA Senate. Motion was passed and Perkins was sworn in by Dr. Grospitch alongside fellow applicant Emma Teply and was allowed to sit with the senate.

SB 21-22 #049: Emma Teply Appointment, The Washburn Student Government Association voted on appointing senate applicant Teply to the WSGA Senate. Motion was passed and Teply was sworn in by Dr. Grospitch alongside fellow applicant Perkins and allowed to sit with the senate.

“Being a senator means that you can kind of be the voice for the people that aren’t able to have a voice.” Teply said. “I definitely want to be able to represent everybody in the Washburn student body and everyone in the community as well as I can.”

SB 21-22 #050, Alpha Phi requested $1,800 of WSGA funding for transportation to a Formal as needed by Alpha Phi’s international policy which dictates that their members are not allowed to drive themselves to the event. Motion passed.

SB 21-22 #052, Campus and Community Affairs requested $1,500 in funding from WSGA in order to award 100 free Flu Shots to students this year. Tickets for the free flu shots are first come, first serve, and it is important to note that last year there were a little less than 100 shots given for free through this promotion. Motion passed.

SR 21-22 #011, Washburn Student Government Association would like to acknowledge and express their gratitude to everyone who participated in Can Emporia this year, as Washburn has won the competition against Emporia for the first time in four years. Motion passed.

SB 21-22 #053, Washburn Student Government Association changed some of the wording in their By-Laws to ensure that Internal Affairs members understand that they are expected and required to maintain an unbiased stance when voting. Motion passed.

SR 21-22 #012, Washburn Student Government Association has identified that as of June 10, 2020, Washburn University held $335,855 in investments in mutual funds, an unknown amount of these related to fossil fuel companies. Senator Sierra Jeter, the originator of this, took this on because she is incredibly invested in getting more information, especially because of the detrimental effect of these companies on the global environment. WSGA would like to recognize the Alumni Association and Foundation’s investment committee’s efforts to end these investments by the end of the year, as well as hold them accountable. However, there was a general dislike within WSGA for the wording, which could be interpreted as accusatory. The motion was tabled indefinitely.

“I want to talk to the Legislative Director, I know he’s interested in talking to me about that resolution, so we’ll see where we go from there. Bottom line though, I will write a resolution bringing awareness to the topic,” Jeter said.

SB 21-22 #054, Washburn Student Government Association is introducing new senate standing rules in the interest of keeping meetings running smoothly and efficiently. These rules now include: the restriction of interrupting a recognized speaker without permission, unacceptable or inappropriate behavior can result in the removal from the Senate Chambers for a specific amount of time, weekly reports for cabinet members can be no longer than two minutes, Public Forums expire and must be renewed after 15 minutes, the recognition of speakers will be awarded more readily to individuals who have spoken less, bills and resolutions are limited to 20 minutes before they expire, after a bill is introduced the floor is open for questioning, once questioning is concluded the floor is then open for debate, and debate time must be ended by vote before moving on to the final vote over the legislation. These are mostly simple and intuitive items, but to have them added allows WSGA to have the authority to restrict inefficient actions. Motion was passed.

Roll Call: What is your favorite song to dance to? Some answers appeared to be crowd favorites, such as: Party in the USA, WAP, On the Floor, Wake Me Up, Sweet Caroline, Cotton Eyed-Joe and the National Anthem of the Soviet Union.