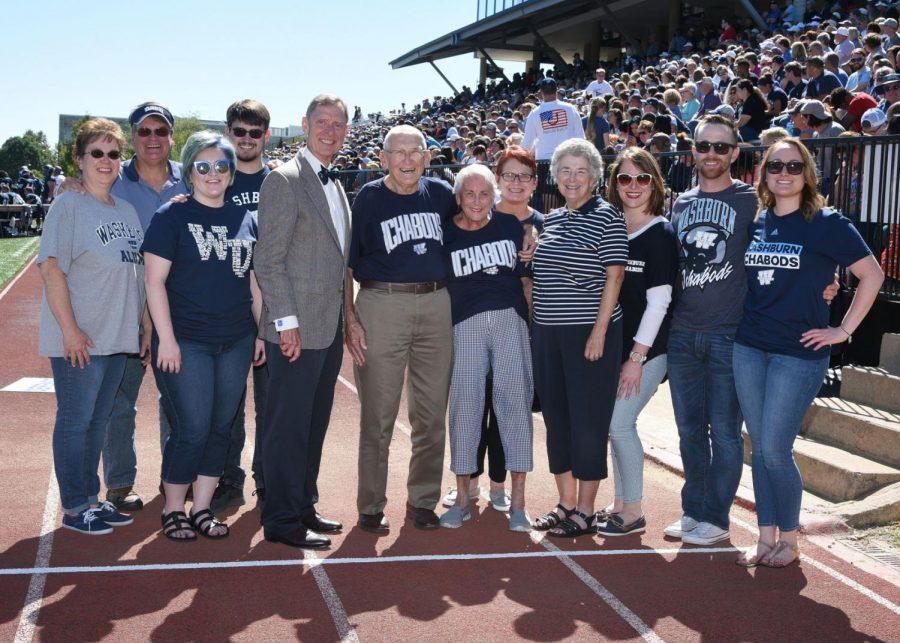 During the halftime of the family day football game on Sept. 22 Washburn honored the Shermoen family with the accolade of “Family of the Year” in appreciation of their commitment to Washburn University. The Shermoen family has had seven children and grandchildren graduate from Washburn in the 50 plus years that the family has been residing in Topeka and teaching, serving or attending Washburn’s campus.

The Shermoen family’s ties to Washburn extend beyond the large amount of their family that has attended our beautiful campus. The Shermoen’s ties to Washburn began in 1967, shortly after Topeka was devastated by a tornado that also destroyed much of Washburn’s campus. Dr. Richard Shermoen left North Dakota St. University to become the chair of the mathematics department at Washburn. Dr. Shermoen fundamentally changed the mathematics program at Washburn by modifying it to include three different tracks to better serve the interests of incoming students: Pure Mathematics, Secondary Education, and Applied Mathematics. He also is credited with significantly improving the computer sciences department, which eventually flourished to become the autonomous computer information science department. His wife, Nancy Shermoen, became the secretary of the psychology department in 1973 where she served for 19 years when Dr. Richard decided to retire, after serving for 26 years, from his position as the head of the mathematics department in 1993.

Besides honoring the Shermoen family with the Family of the Year award, Dr. Shermoen is also receiving another honor. Three new high-tech classrooms have been added to Washburn’s Mabee library recently to expand their new tutoring environment. These classrooms are part of the math department and have been named the math emporium collectively. One of these classrooms will be named after Dr. Shermoen to recognize his dedication to Washburn and the department of math on campus.

Dr. Shermoen and his wife found Washburn in disarray after the 1966 tornado but found a way to recognize the beauty of what Washburn would become in the years following their arrival on campus.

“When we arrived at Washburn the campus was still pretty devastated from the tornado that had blown through Topeka but it was still a wonderful time” said Dr. Shermoen. “It’s just been so wonderful to watch the University grow and we have been so fortunate to have been able to serve Washburn.”

His dedication to the University did not end when he retired in 1993. Dr. Shermoen would go on to become heavily involved in alumni activities and become the president of the retiree association at Washburn while several of his children and grandchildren became involved with Washburn as students and staff.

Their son Rich met his wife Lori at the spring musical in 1979 at Washburn where they were both cast members of the performance South Pacific. The two have been inseparable ever since, and their connection to Washburn in bringing them together has made them appreciate the University all the more. Their daughter, Margy, and all three of her daughters, Bridget, Chelsea and Mandi, all attended Washburn in the 2000s. Their granddaughter, Mandi, currently sits on the Washburn University Alumni Association Board ever since she attained the position in 2013. Rich and Lori’s son, Andrew, will graduate this December and is currently student teaching at Topeka High School in the English department.

Rich was overwhelmed when his family was called onto the field on Family Day.

“We had known for two weeks that we had been selected for the award but when we walked out onto the field we all felt so proud, excited and humbled to be chosen and recognized for our relationship to Washburn” said Rich.

Dr. Shermoen was deeply touched when the University named his family the Family of the Year and honored them on the football field on Family Day.

“We were so honored and humbled and very overwhelmed to be selected for the Family of the Year award. We were all so overjoyed and excited. I couldn’t be happier with how Washburn has treated our family” said Dr. Shermoen.

The Shermoen’s dedication to Washburn and their love of the University earned them a place of recognition on the football field so that they could be properly acknowledged by the campus. There are few other families on campus that can match the Shermoen’s record of dedication to this University and there are fewer still that can boast as many accolades and leadership positions in the alumni associations of Washburn. The Shermoen family is a perfect example for what it means to be an Ichabod.

Washburn University honors one family every year on Family Day as part of the events and celebrations that occur on that day. To be nominated, a family must be recommended for receiving the award by students, faculty or staff. In the case of the Shermoen’s, they were nominated by Andrew.