Soccer crushed by clock in loss to Jennies 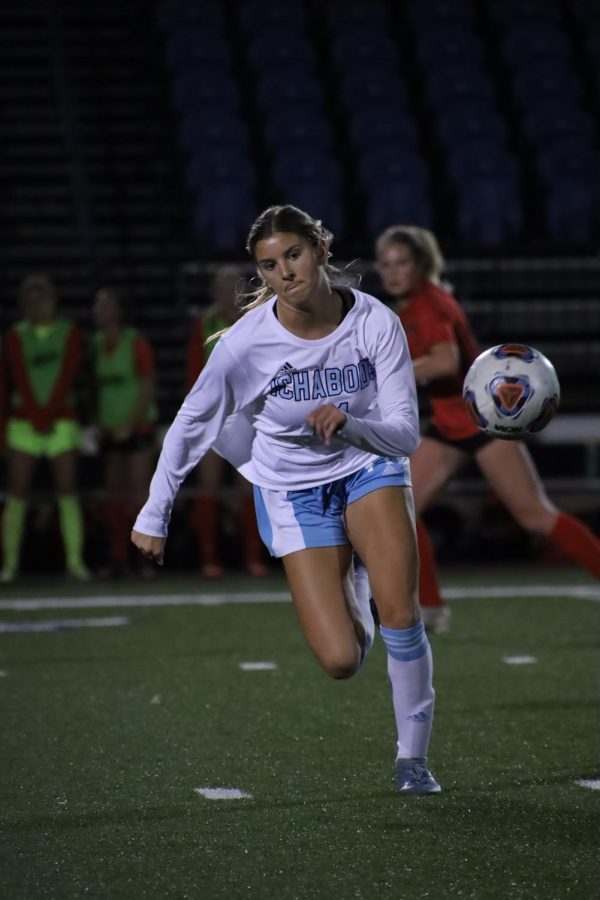 Get the ball: Washburn forward Khloe Schuckman goes after the ball on Oct. 22, 2021. Schuckman recorded three shots on goal in the match.

Fans at Yager Stadium were in for a gut-wrenching 1-2 loss Friday night, Oct. 22, 2021, to MIAA league leaders Central Missouri.

“The girls fought so hard… A couple of things didn’t go our way, but they really battled through and through. UCM is a really good team…To even take them to double overtime, the girls should be proud of themselves,” said Assistant Coach Jessica Hillebert.

The Ichabods’ qualification for the postseason is still likely. But it is a double-edged sword to be left playing the exact teams directly under them in the standings.

Washburn currently is in seventh place, and Fort Hays State in eighth. Currently excluded from the playoffs is Missouri Southern in ninth. If Washburn stays unbeaten for the last three games, a playoff place will be reserved.

The MIAA has scheduled games this year on Friday evenings and Sunday afternoons. Even though this was the third Friday night game of the season pushed to overtime, the loss was not due to a lack of endurance conditioning.

“It does play a part when it comes to overtime, because you have to make sure you have legs for the Sunday game…We built them for that in pre-season fitness and now it’s just maintenance,” Hillebert said.

A long-distance strike from senior midfielder Mackenzie Menke in the closing stages of the game put the Ichabods ahead. Shortly after Central Missouri equalized with a free kick goal of its own in the last minute of regulation. According to NCAA regulations, the play clock was correctly stopped at 20 seconds.

The timing of the goal is particularly crushing because the referee conferred with the press box to adjust the play clock multiple times during this game, at one point adding 30 seconds to correct the time.

Even with unlucky circumstances out of the teams control, they did not want to be absolved of blame, and instead use it as a way to learn and get better.

“Like you said, the clock didn’t get handled in our favor, but at the same time, we didn’t do the right things to go and secure that [win]. We got opened up and then we gave a stupid foul. So as much as it’s easy to deflect blame, you also have to look at what we’re responsible and accountable for,” said Head Coach Davy Phillips.

3’ Lynch and Schuckman, one-two outside the box. Lynch shoots and it’s a couple yards wide.

5’ A Central Missouri player is able to jab a shot from between the legs of an Ichabod, trying to shield to allow for Wells’ retrieval. It ricochets off the post faster than anyone can react.

13’ In the last three minutes, Washburn has been lucky to not have two turnovers leading to goals for Central Missouri.

17’ Advertising the capabilities of her aerial passing range to Central Missouri, freshman midfielder Charlie Taylor gets intercepted this time. She runs thirty yards back into defense to personally knock the counterattack out-of-bounds.

25’ YELLOW CARD: Freshman defender Carlee Thompson is booked after a minute of conversation with the referee.

30’ A triple save is a team effort from the Ichabods. Sophomore goalkeeper Raegan Wells came off her line to parry a close-range shot. Two Ichabods blocked the second attempt. The third was inching toward the far post, but it was blasted out of danger,with time to spare.

35’ Freshman midfielder Cloe Quintana appears to be going down before a tackle, but she stays on the ground. She rolls onto her side, then rests until Lynch is able to get the ball out of bounds. Quintana appears to be in agony when she puts her weight on her legs. She is carried over to the physio table. After three minutes, the game continues.

40’ Incisive ball movement from the Ichabods leads to a shot for freshman forward Emily Stone. But it is deflected, sailing wide and out for a corner.

51’ YELLOW CARD: Senior defender Olivia Harriger is booked for a tackle because of a soft shove she gave to her opponent to prevent a collision.

52’ UCM has a corner after Raegan Wells makes a diving parry around the near post.

74’ Washburn’s ball movement is effective. It starts with a steal by Charlie Taylor, who finds senior midfielder Tera Lynch through a tight window. Lynch evades a defender. She sends a weighted pass that, to freshman forward Khloe Schuckman’s feet, appears to be magnetic. Schuckman holds up the attack for a moment before taking a shot around the defender at bay. It is caught by the keeper.

78’ In the last minute, UCM has had two attempts at goal. The first was off the post, the next one over the crossbar.

84’ Freshman defender Taylor Bockover is fouled and subbed off. For about a minute, the referee stopped play while having a close conversation with Davy Phillips.

84’ GOAL Washburn! Dribbling toward the goal forty yards away, Mackenzie Menke had a look, and a shot, and a go-ahead against the league leaders with five minutes left in the game.

87’ Goalmouth chances at both ends. In these last few moments after the goal, the tempo has picked up.

89’ Ten yards from the D, Johnson brings down a charging attacker. The resulting shot or pass will probably be the last attempt of the game.

89’ GOAL Central Missouri’s Sydney Leslie sinks the ball into the back of the net, and sinks Washburn hearts into their stomachs. Again for the Ichabods, it is overtime on the first night of a Friday/Sunday weekend.

FT YELLOW CARD: Davy Phillips is booked for remonstrating to the referee.

ET1 4’ Schuckman was shaped for a shot beside the last defender, but she managed to block Schuckman’s attempt.

ET2 2’ UCM’s Caroline Cole is booked for a tackle.

ET2 6’ Khloe Schuckman is nearly punched by the keeper when she almost gets her head on a long, free kick sent into the box by Washburn. The ball pops out and goes to Vivi Soto, who lifts it over the reach of the stuck-out goalkeeper but it is cleared off the line!

ET2 7’ GOAL UCM at the other end. Twice in this game, there has been a fast, dramatic shift. It is heartbreaking for the team to suffer a loss in this way. In the end, it was a clunky foray into the box and a sharp blow from six yards that saw the victory go the way of the Jennies… .