Use your vote to defend democracy 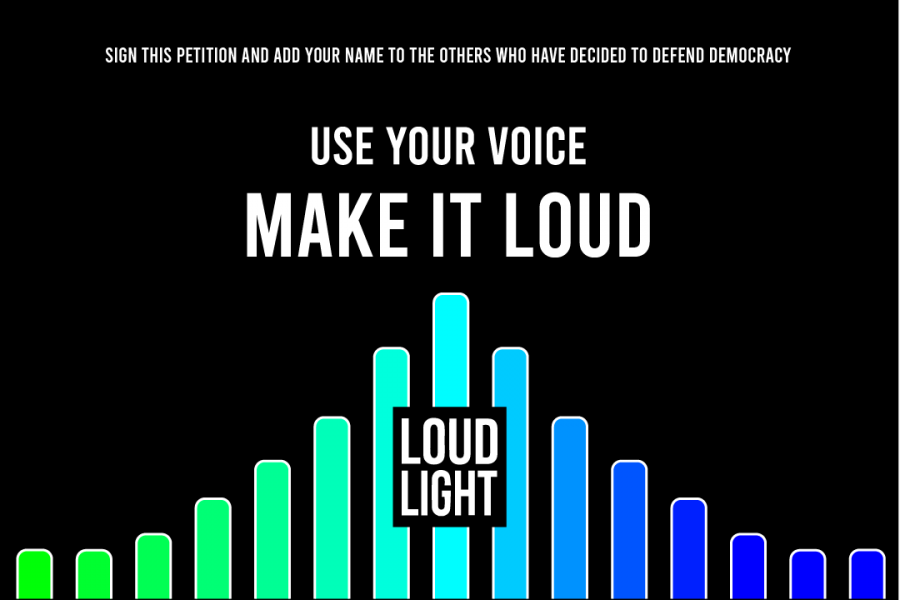 Use your voice: Loud Light is a statewide organization that's fighting to ensure that every voice in Kansas is heard, starting with student voices. Check out the links provided to get more information.

A little less than a year ago, I had always taken the fact that I have lived in a democracy for granted. I had always been incredibly interested in informing myself on the going-ons of politics.This meant having eight news apps on my phone and checking them regularly, but I would never try to enact change on what I was seeing. I would talk politics with my friends and trade ideas. We would try to convince one another of things, but I never called my representatives to try to convince them. I believed that, if it came to it, I would be willing to lay down my life to defend the democratic institutions that I hold so dear, but all I could do on January sixth was pray.
January sixth was a defining moment for me. Even as I write this now I can still see the people climbing the walls, passing easily through the fences and walking into the rotunda waving Confederate flags. The mind shudders to remember. I realized, watching the scenes of broken glass and chaos, that I was completely powerless to do anything. I had power before to change this, but it was too late. I had not tried to stop this attack. I did not call my congress people or go online and try to convince people that the election was not rigged. I even had a friend, who has been seized by these absurd ideas, tell me that an attack was being discussed. I brushed off the notion with false hubris in the self-sustaining ability of our democracy.
What’s even worse about this tragedy is the fact that I wasn’t the only one. I wasn’t the only one who felt powerless. I wasn’t the only one who feared that I’d wake up tomorrow in a dictatorship. I wasn’t the only one who experienced what my Vietnam veteran grandfather called “more terrifying than the fall of Saigon.” The entire nation was traumatized by this event. And normally after a tragedy, we could hug our loved ones close and know that the people we’ve entrusted with positions of power were working tirelessly to ensure that this sort of thing never occurs again. But we cannot.
The fact of the matter is that many people in power not only failed to denounce this insurrection, but have also failed to ensure it cannot happen again. There are still those who actively spread false rumours about the election being fraudulent and stolen. There are still those who actively worked to cause January sixth, and continue to work and hope for a similar storm. So what can we do? The answer is simple: we do what we should’ve done before the attack on the capital. We call our officials, we denounce those working to divide and promote violence and we overthrow, as Abraham Lincoln said, “not the constitution, but the men who pervert it” through the power of our vote.
So then, will you learn from our collective mistakes? Will you be able to take action and do everything you can to ensure that such a tragedy will never occur again? Where will you be when the next January sixth occurs; sitting, hopeless in your room? Or already out on the street, ensuring our children can continue to live in the land of the free?
My name is George Burdick, and I asked myself that question when the dust had settled and a new president had been sworn in. “Where will I be?” Upon reflecting on this question, I resolved to ensure a satisfactory answer. This is why I joined Loud Light.
Loud Light is a statewide organization that’s fighting to ensure that every voice in Kansas is heard, starting with student voices. I joined the Loud Light team to ensure that everyone gets a voice in our government, to ensure everyone uses that voice and through this, to protect our democracy from future attacks. I’m writing this now to ask if you’d be willing to take a stand and join us as well.
Over the past couple of years, the team at Loud Light has been diligently working to secure voting places on campuses across Kansas. However, as with most public endeavours in this nation, goals such as these require the full support and participation of the people. So I write to you asking the questions I’ve already stated above, and providing you part of the solution should you choose to seize it. By signing our petition, you are helping ensure people have a voice. By signing our petition, you are moving the state towards a better future. Perhaps most importantly, by signing our petition, you are doing your duty as a democratic citizen.
So then, will your convictions forge themselves into actions today? Or will your will to fight for change simply fade away, until tragedy strikes us again?
Will you sign this petition and add your name to the others who have decided to defend democracy?
https://www.loudlight.org/petition
Edited by Ellie Walker
Edited by Kyle Manthe