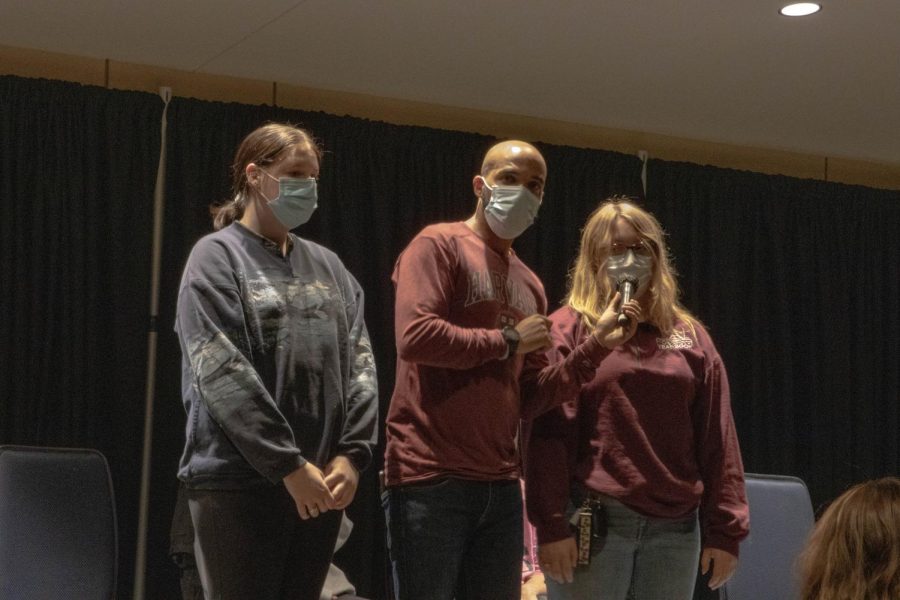 Talk it up: Hypnotist Chris Jones having students talk to the everyone that is at the Chris Jones Hypnotist event while being hypnotized on October 20, 2021.

Hypnotist Chris Jones altered the mental state of students at Washburn A/B Memorial Union Wednesday night Oct. 20, 2021. JonesHe has performed as a hypnotist for over 11 years and has made appearances on “The Steve Harvey Show”, “Windy City Live”, and “America’s Got Talent”.

Jones performed a series of volunteer-based maneuvers that made students fall asleep, pretend to be a superhero, sing songs and believe they could read minds.

Ever since Jones was a child, he showed an interest in displaying his skills to other people. Whether that be through family magic shows in 6th grade or his graduate school thesis paper on hypnosis.

“I loved magic. In college, I saw a hypnotist and I kept seeing different hypnotists do the same routines, and I thought it was silly,” Jones said.. “The cool thing about hypnosis is I didn’t need to keep secrets. I could honestly tell you how it happened, how it works and what part of the brain was firing. It has been more than a decade of doing it professionally and 14 years of studying it.,” Jones said.

Jones has been able to open doors of realization to those he encounters. It is more than just entertainment, there is always time to listen to one another.

“I go to some places and I know I am one of the few performers of color they’ve seen. I did a show at Clemson University, I’ve done Harvard, I’ve done Basser and every school is a little different,” Jones said.. “Wherever you go in this world, people don’t like their neighbors. If you would sit down with your neighbor, drink with your neighbor or have a meal with your neighbor, you wouldn’t have to be afraid of your neighbor. I would like you to let me open the door.,” Jones said.
Some students were not able to be hypnotized on Wednesday, but they didn’t let that stop them from believing.

“When he did the balloon trick it didn’t affect me, but I definitely believe in hypnotism. I think that I was overthinking everything. People who think it doesn’t work are going to believe what they want to believe. Like [Jones] said, he could be doing something wrong or you’re overthinking it,” Cheyanne Colwell, a senior history for secondary education student, said.

There is always more to learn and there is always another perspective worth exploring.
Edited by Ellie Walker, Simran Shrestha, Kyle Manthe