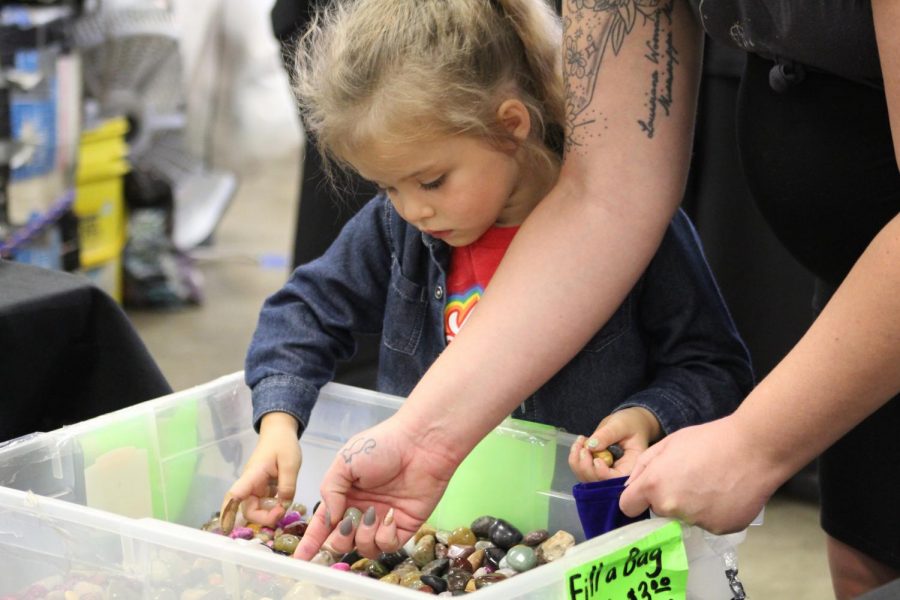 Lenora and her mother Bobbi Broyles attend the mineral show where Lenora can learn about rocks, while identifying ones out of a tub.

Rocks and minerals arrive in Topeka to be sold at Stormont Vail’s Agricultural Hall.

Some join the Topeka Gem & Mineral Society to express a hobby. While others interests lie with jewelry, education and collecting rocks from all over the world.

Topeka’s “Green With Envy” mineral show had vendors and education booths on Oct. 9-10. This was their 64th annual show.

Senior Catherine Vollrath, a biology student at the University of Kansas, travelled from Lawrence to see the show with her younger sister.

Caroline, younger sister to Catherine and freshman in biochemistry, said she enjoys fossils.

Attending this event as well was Bobby Broyles and her young daughter Lenora. Lenora Broyles picked from a bin of minerals, in which she would cite to her mother what each one was.

“She likes green rocks,” Broyles said. “Normally she likes malachite or aventurine. My mom, she’s big into rocks and crystals. I just think it is an education for her to get out and to learn new things.”

Harold Merryfield picked up the craft of sphere making in San Diego in the early 1990s. He moved back to Topeka in 1998 and joined the Gem and Mineral Society.

“I just enjoy the hobby,” Merryfield said. “I have been out in the field, looking for rocks— southern California mostly.”

He operated a sphere machine with three wheels, and explained how the machine works to create a beautiful spherical rock out of rubble.

“Each cup turns into a rock,” Merryfield said. “I’ve got diamonds embedded in the cups. I had them welded in ordinary pipe fittings. I have to make sure it’s all turning in different directions.”

To each their own, many came to showcase rocks collected from all parts of the world, and sell them to eager eyes that marvel at minerals.