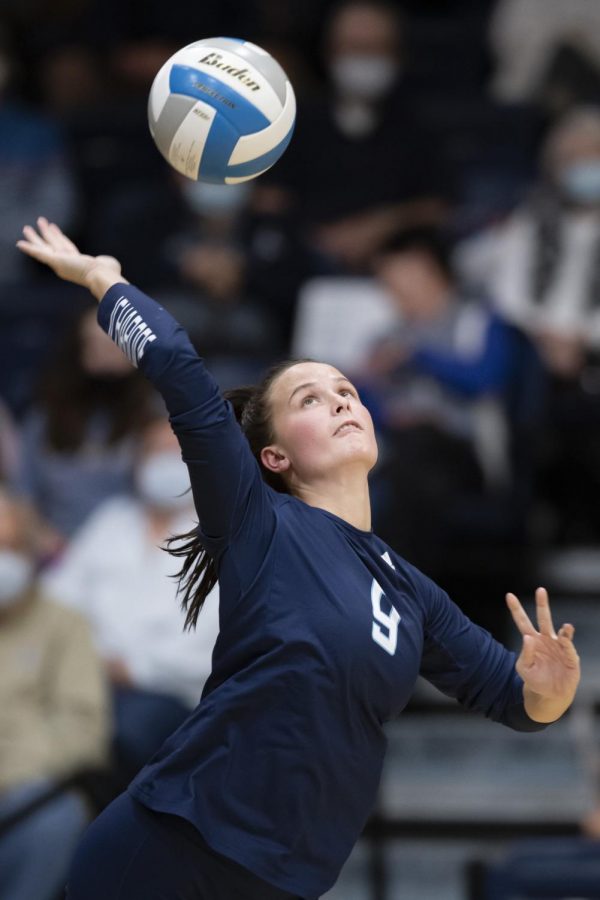 After a sweep of Fort Hays State, Washburn volleyball returned to action on Oct. 21 for a top-five matchup against the University of Central Missouri. The Ichabods entered the night at No. 2 in the American Volleyball Coaches Association poll while the Jennies were third. Earlier in the season Washburn was victorious in Warrensburg, Missouri, winning 3-1 and looking to stay atop the MIAA standings with another win.

The start of the match was back and forth, with the score tied at seven after 14 points. Central Missouri’s strong offense attack created some separation, creating a 14-11 lead. The Jennies would remain in front into the late stages of the set before the Ichabods called a timeout with the score 22-17. It would not be enough as the first set belonged to Central Missouri 25-19.

“But (Kersti) Nix killed us. The Nix kid just killed us, we couldn’t stop her. I mean hell, we could have put a surfboard up there we couldn’t block her,” said Head Coach Chris Herron. “I think that’s the key to the match was she just did so much, and we did little with her.”

The start of the second set belonged to Washburn as they jumped out to a 7-3 lead, forcing a timeout from the Jennies. Strong defensive play from the Ichabods kept them out in front, extending the lead to seven points before another timeout was called. The lead was maintained late into the set before winning 25-17 on a kill by freshman outside hitter Jalyn Stevenson who led with four kills in the set. Senior middle blocker Sydney Fitzgibbons also contributed three kills.

It was slow going early in the third set for Washburn, as they fell behind 5-1 early, forcing a timeout. The points would even out until the Ichabods were able to tie the set at 13 after three straight kills. Central Missouri would reel off three straight points before Washburn came back and pulled ahead 20-19, forcing a timeout from the Jennies. A long volley that ended in a point for the Ichabods would put them ahead 23-21 causing another timeout.

Central Missouri would win three of the next four points to tie the set at 24 before a Washburn timeout. The two sides continued to trade until the Jennies took two straight points to secure a 30-28 win. Senior middle hitter Allison Maxwell recorded six kills in the set while Sadler added 20 assists.

“I think sometimes we just get a little complacent, and we get comfortable.So, I think that might have happened tonight and against good teams we can’t do that,” said Maxwell.

The fourth set started like the first, with each side taking seven of the first 14 points. The Ichabods would take some control of the set, leading 13-10 before a Central Missouri timeout. The Jennies would rally after the break, tying the set at 16 and forcing a Washburn timeout. Two straight points by Central Missouri out of the timeout put them in control until another Ichabod timeout was called at 22-19. The Jennies would take that advantage to the end, winning the set 25-22 and the match 3-1.

“I think we just move onto the next game. Like obviously it’s disappointing but we can’t let one game define us, so we are just focusing on practicing and getting better from here on out,” said Maxwell.

Maxwell led the way with 15 kills, while Fitzgibbons and Berg each added 14. Sadler finished with 62 assists and ten digs and Rottinghaus had 31 digs to lead Washburn.

The loss drops the Ichabods to 19-3 overall and 11-2 in conference play with a road match against Emporia State set for Oct. 26.