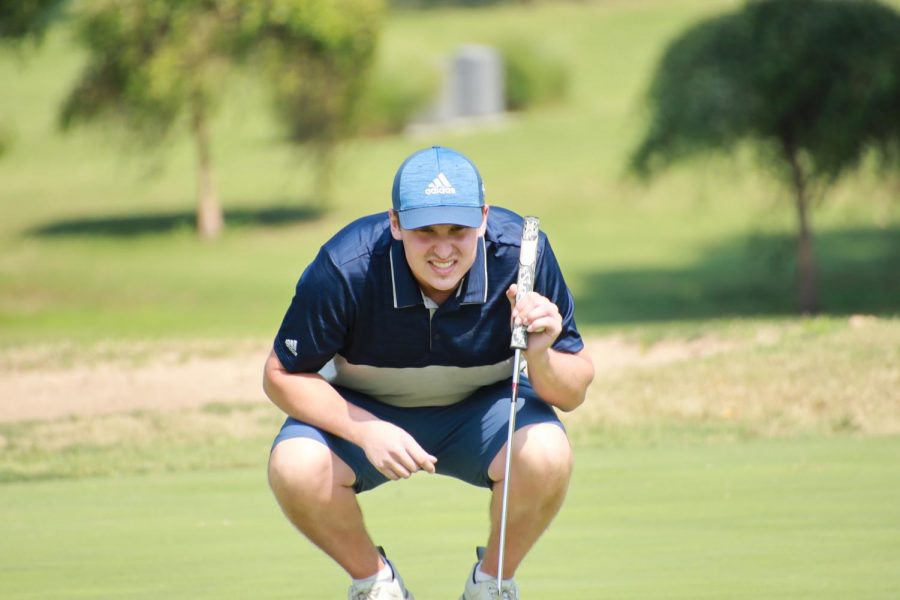 Down low: Sophomore Cade Uhlenhake kneels down to position his next shot on Sept. 13, 2021.

Washburn golf was in action in Hays, Kansas for the Fort Hays Invitational for the teams final tournament of the fall season. It would be a performance that the team will look to put behind them heading into the spring season.
After finishing in eighth out of 15 teams after day one, the team dropped to ninth place on the second and final day. Leading the way was sophomore Cade Uhlenhake, who finished tied for 19th place with a total score of 223 over three rounds.
Also, in the top-25 were juniors Dawson Wills and Jackson Wexler who finished with scores of 223 and 224 respectively. Rounding out the team scoring for the Ichabods were sophomore Hayden Beck who had a score of 236 and sophomore Daniel Duffin who withdrew after the first day.
Competing individually, sophomore Caden Vanlandingham finished tied for 43rd with 231 strokes through the three rounds.
Washburn heads into the spring season tied for fourth in conference points after two competitions with a total of 13 points.