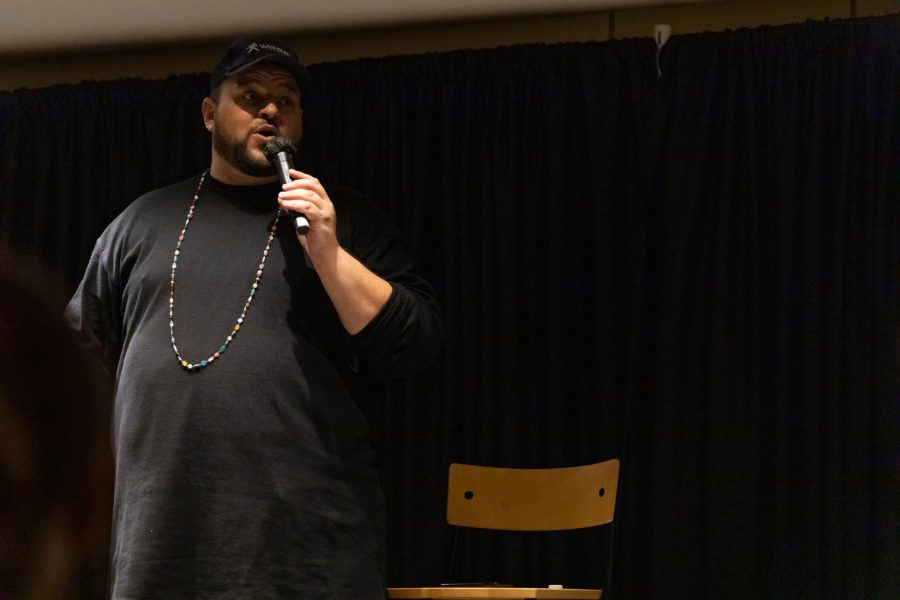 On Tuesday, Oct. 19 at 7 p.m., Washburn welcomed actor, activist and comedian Daniel Franzese, most known for his role in the movie ‘Mean Girls’, to the A/B room to perform his comedy stand up routine. The show was sponsored by Student Involvement and Development.
The show opened with comedian David the Gay, who had the crowd in stitches over his stand up about Gen Z and his experience being a part of the LGBTQ community.
Just as David got the crowd warmed up, he introduced Franzese to the stage.
Franzese hit home with the crowd at the start of his show by ribbing on the Washburn mascot. The comedian asked the crowd if it was Ichabod Crane, prompting an audience member to correct him by stating he’s ‘just some white guy’.
Franzese delved into his identity as being an Italian American man in stand up and holding the role of the “iconic gay best friend”, which according to Franzese, only pays 11.50 an hour. The audience couldn’t get enough of Franzese’s reenactments of his Italian mother’s horror stories. He informed the audience that you don’t have to be born an Italian to be one, you just have to be accepted by the family.
“If a wooden spoon comes flying at your face, you’re an honorary Italian. Extra points for dodging it,” Franzese said.
Franzese touched on everything from online dating, his experience as a gay man in comedy and the film industry, and his fear of the Pompei disaster. The room couldn’t catch their breath as Franzese justified this fear by saying he doesn’t want to become a plaster cast statue of himself sitting on the couch with a tub of ice cream.
At the end of his show, Franzese encouraged people in the audience to not let their differences or their age stop them from pursuing their dream. The comedian opened up about how he was always told he was too fat or too different to thrive in the industry. He then gave some specific advice to the creative people in the crowd.
“The biggest thing you guys have is time,” Franzese said.
Most of the audience members were more than willing to stay behind for a quick meet and greet with Franzese.
“Me and my friend and my little sister use to watch it (Mean Girls) at every sleepover,” said Audrey Tubach, a freshman majoring in nursing. “It’s crazy that he’s met Lindsey Lohan and Tina Fey and Rachel McAdams, so I knew I had to come see him.”
While the show was incredible, it’s fair to say having face to face time with Franzese was the highlight for some fans.
“He made a lot of jokes that were all inclusive, and he was really easy to work with. It seemed like he really wanted to be there for the meet and greet,” said Carmen Bauer, director of moves and marketing for the Campus Activities Board. “I think everybody else had a good time too.”
Through discussions with fans, Franzese expressed that the goal of his work was to make an impact on the lives of people that are often not heard.
“I had political aspirations and I realized that I could actually do more by talking about stuff in my standup, talking about stuff in my art,” Franzese said. “The only way people can learn to change is by hearing perspective, so we need to hear those voices that are marginalized.”
Based on laughter and the time he spent with audience members, it is safe to say that Franzese made an impact on Washburn.