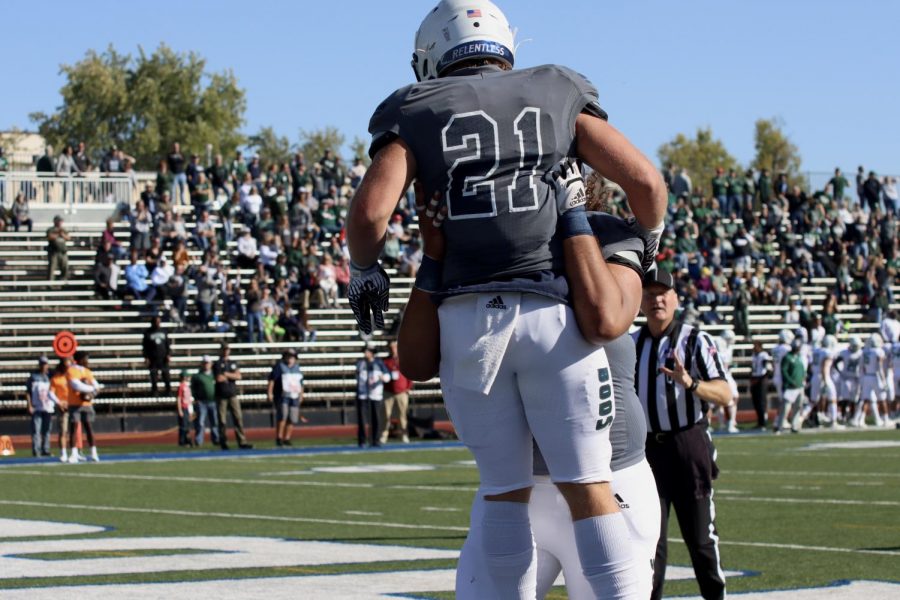 Winning touchdown: Washburn running back Taylon Peters (21) makes the winning touchdown on Oct 16, 2021. Peters finished with 31 yards receiving and a touchdown in the 17-16 victory.

After a walk-off win the week before, Washburn football was back in action at Yager Stadium to face No.2 ranked Northwest Missouri State University. The Ichabods entered 4-2 on the year, with a perfect 3-0 record that would be challenged by the Bearcats’ perfect 5-0 record.

Washburn had the ball first but its drive was stifled in Northwest territory after an injury to senior quarterback Mitch Schurig. The ensuing drive from the Bearcats lasted 18 plays and nearly 90 yards but resulted in zero points after a missed field goal. The drive lasted most of the first quarter as it ended scoreless.

The two sides traded punts to begin the second quarter as both defenses limited any big plays. The Ichabods offense was finally able to get going midway through the second quarter, completing an array of short passes to move the ball down to set up a 36-yard field goal by freshman kicker Trenton Brehm, for the first points of the game.

Northwest Missouri moved the ball into the red zone before halftime but the drive was cut short after an interception in the endzone by junior safety Peyton Lane. The impressive defensive effort in the first half, also aided by two sacks from senior defensive end Malick Fall, kept the Bearcats scoreless after 30 minutes.

After trading three-and-out drives to start the second half, the Bearcats pulled together the first touchdown drive of the game, going 85 yards over 14 plays to put seven points on the board.
Washburn responded right back with a balanced drive down the field capped off by a touchdown pass from freshman quarterback Kellen Simoncic to senior wide receiver James Letcher Jr. from 15 yards out to take the lead before the end of the quarter.

In the fourth, Northwest Missouri moved inside the Ichabods ten-yard line before a third sack from Fall sent the offense to the sideline and set up another missed field goal from the Bearcats.

An interception from Simoncic set up Northwest Missouri with good field position, which they used along with a strong rushing attack to get into the end zone again.

That left Washburn with the ball, down four with just over four minutes left. It was no problem for the Ichabod offense as they drove it downfield with ease getting into the end zone with 48 seconds left on a touchdown pass from Simoncic to sophomore running back Taylon Peters .

“I’ve been here two years and I felt like I was ready for it. It was a little overwhelming at the start, but Mitch has been such a good leader and example of how to prepare,” said Simoncic, who replaced Mich Schurig on the first drive.

The Bearcats desperate attempt to score was cut short by junior defensive back Kevin Neal Jr., who hauled in an interception with eight seconds left to seal the game with a final score of 17-16.

“Back-to-back weeks our kids figured out a way to come through, and defense played outstanding all game and our offense had just enough,” said Head Coach Craig Schurig. “I’m really proud of them. The kids stuck together and it is hard, the schedule we have had six games in a row with, those teams are quality teams.”

Washburn’s record is 5-2 on the year as they head on the road to face the University of Central Oklahoma on Oct. 23.