Darkest Dungeon: Delving into the psyche of adventures 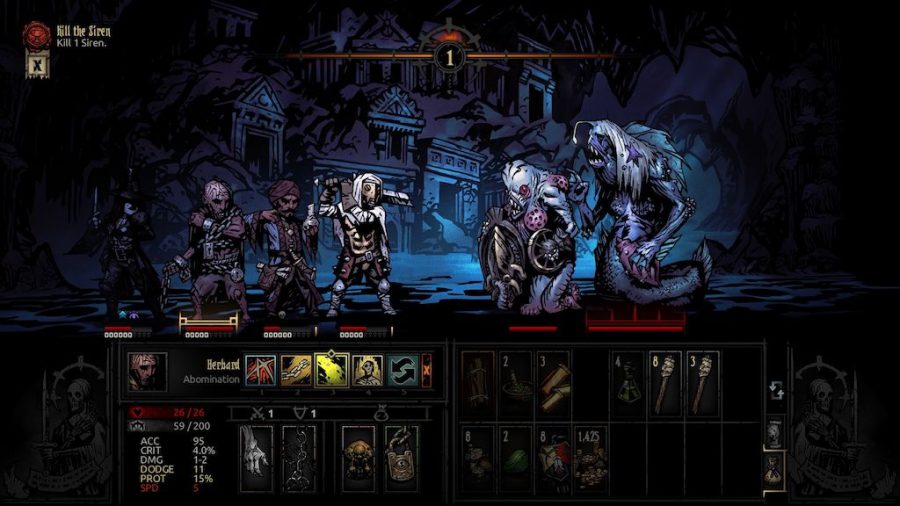 We are getting close to Halloween and with the scary season approaching, I thought it was time to revisit one of my favorite scary games, Darkest Dungeon. If you have never heard of Darkest Dungeon, let me give you some quick backstory, the game is a 2D, turn-based, RPG created by Red Hook Studios. It was successfully kickstarted and released on January 19, 2016, since then it won PC: Gamer Best RPG of the year award in 2016, has released two expansions and continues to have a very positive score on Steam.

The setting for the game is that you are the descendant of a wealthy and irresponsible land baron, who spent his youth and wealth on pleasure and vice, eventually, he grew bored with this lifestyle and decided to use his resources to dig under the family mansion to uncover the dark secrets within. He was successful, but in so doing he released a terrible curse that has brought forth monsters that plague the lands and the family home. Realizing his mistake, your ancestor wrote to you that you must return to the house, use what is left of the family income to hire adventures and heroes to fight back the monsters and undo the curse he has brought upon the family name. Oh and if that was not dark enough, as soon as he finished the letter, your ancestors kill himself.

For the rest of the game, you play as the owner of this cursed estate who must use their resources to cleanse the evil from the land. With this kind of set up you might think that this game is set up to be about resource management in a tough situation, and while you would be partly correct, the core of the game is actually something much deeper than that. What Darkest Dungeon is really about is the physical and psychological strain that adventures go through when questing in dungeons. Most video games, role-playing games, first-person-shooters, etc, take you through a story where it’s a given that you, the hero, will win and all along the way have great adventures and generally have a fantastic time, but they shy away from facing the realities of putting your life in danger repeatedly and facing horrifying monsters on a daily basis.

Yet it is not just the characters that go through emotional stress in the game, but instead, everything in Darkest Dungeon is designed to ensure you the player feels the same fear and emotional stress that the characters you control, feel as well. Everything about the game, from the eerie and subtle music that greatly intensified when a truly horrible creature approaches, to the beautiful and intense gothic art style that is bleak and depressing, or dark reminiscing of the narrator,(who is the ghost of your ancestor who sticks around to recount all his failings), reminds the player of the dire straits they and their characters are in. Part of the love I have for the game is how well the developers can control the tone that each level of the game you come across, for example when you wander through a dungeon with your party of four adventurers, one of the many things you keep track of is your torch and the light level it is at. If the torch gets too low, the dungeon starts to dim and it becomes easier for monsters to ambush you, as well as your party begins to get stressed, if the light goes completely out your party begins to panic, (and believe me, so do you)

Speaking of stress, this is a major component of the game, as all of your adventures have a stress bar underneath their health bar that you must keep track of. As you move through dungeons and encounter traps and monsters, it’s understandable that you will be fighting to keep your health bar in decent condition throughout the dungeon to avoid death, (which is permanent for your heroes by the way), but another thing monsters can use to attack your party with is stress attacks. This is the level at which the hero is psychologically affected in their time throughout the dungeon, you might have a hero who has full health, but if a monster with stress attacks freaks them out too much and fills up that stress bar one of two things will happen. Either your hero will fight through their fear and become resolved, gaining a positive trait to their character, or they will become terrified and gain a negative trait that will greatly impact, not only themselves but the stress of everyone else around them. It can be incredibly difficult to win a battle when one of your heroes that have become terrified and gained the paranoid trait begins accusing his companions of attempting to murder or get him killed during an expedition. This will cause the other party members to begin feeling stressed as well and continue to increase the stress of the terrified hero, if their stress bar fills for the second time, the hero will literally have a heart attack and there is a chance they will die.

Once you complete a dungeon, you can take your stressed heroes (those still alive anyway) and send them to places like the church or tavern to de-stress and become ready for the next dungeon. This is the other half of the game and the very reason you send your heroes into the dangerous dungeons, to begin with. Whenever you successfully complete a dungeon you bring back various forms of loot and use them to upgrade, not only your heroes but also the town you are trying to save. It is here that you must carefully keep track of your resources and use only enough to clear out the next tier of a dungeon you need to complete, making sure not to use too much or, (heaven forbid) too little.

The real charm of the game is Darkest Dungeon makes the player feel every choice and action that make by greatly rewarding success, and harshly punishing failure. The game is a grind and each step taken must be carefully calculated and measured, you can never plan only for the moment, in any stage of the game, but instead must be constantly thinking 3 moves ahead. What keeps bringing players back, even after being out for two years is the skill it takes to not only manage enough resources to keep things running smoothly but also managing heroes who are constantly unreliable due to their psychological state. This is one of the few games I would recommend having a guide handy as you complete it as mistakes early on can place you into a whole from which it is nearly impossible to escape.

If you’re looking for a game to play in the dark and keep you up all night, I highly recommend Darkest Dungeon, just don’t plan on sleep well that night.