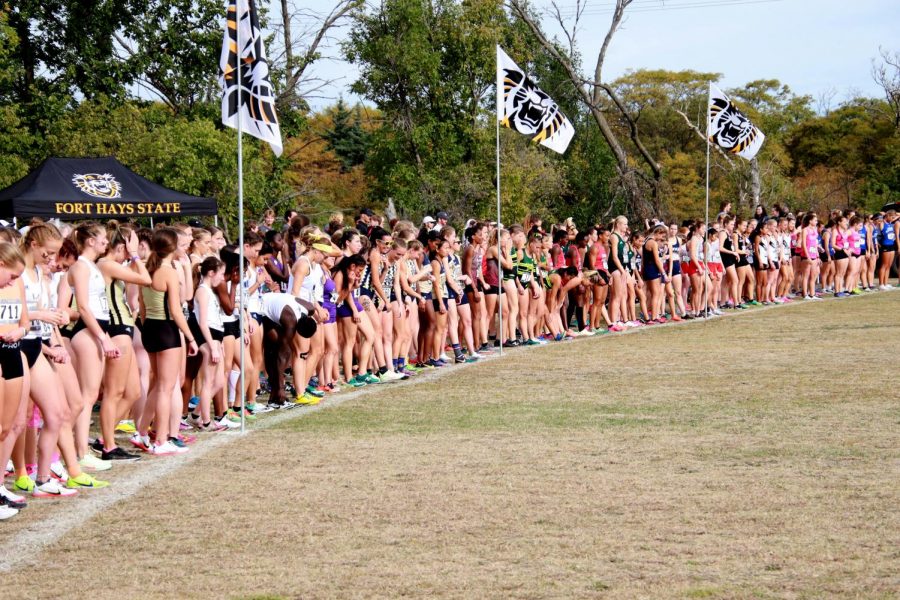 Runners, start your shoes: All the runners stand at the start before the women's race in Victoria, Kan. 17 schools competed in the meet on Oct. 9, 2021.

The Washburn men’s and women’s cross country teams gave a strong showing on Oct. 9 in the FHSU Tiger Open at the Sand Plum Nature Trail.

The men’s team finished in the top half, in seventh of fifteen teams who ran the 8K course. Freshman Collen McLain led the Ichabods, finishing 25th overall with a time of 24:57.8 earning 20 points for the team. Sophomore David Kibet was 34th with a time of 25:22.7 earning 26 points and behind him was Sophomore Gabriel Chinya in 53rd finishing in 25:43.0 minutes and earning 40 points.

Freshmen Ethan Thompson and Keetan Munsell rounded out the scoring for Washburn, finishing in 66th and 85th respectively and adding a combined 110 points. That left them with a total of 196 points in the meet.

A large gap followed before freshman Katharina Götschl crossed in 61st followed by sophomore Dulce Ayala Chanezin 75th with a time of 19:48.8. Junior Avery Hoffpauir rounded out the scoring adding 64 points. Washburn finished with 140 points as a team, good for seventh out of 17 teams in the 5K course.

According to Graduate Assistant Coach Paddy Robb, running the whole team at once in this race provides a unique experience for the runners.

The Sand Plum Course in Victoria is unique in more ways than just the unlimited number of entries.
“This is a dedicated cross country course, whereas the emporia meet is just around the park. I’d say it’s probably a bit faster than the emporia course. It’s probably not as fast as the course we ran earlier in the year at Missouri Southern so in cross country, you can’t really compare time to time straight ahead,” Granato said.
Robb and Granato go on to say that it is clear the team is improving as the season progresses.

“Coach [Granato] has already looked at our first meet of the season at Missouri Southern, our varsity meet, and checked the results from there…It shows that maybe the times don’t reflect it but we’ve moved in the right direction like in terms of our fitness and how we’re doing compared to other teams, even if the times don’t reflect that,” Robb said.

Coach Granto Confirms that in past races, some of the teammates weren’t in the best shape, but the whole team has recovered and pushed through the difficult times.

“The last time we saw you at Emporia, we were running people that had been a little bit banged up and injured. It was their first opportunity to get to race and this is their second…I think what we saw today was that a lot of people benefited from that and that they took another step forward, that they either ran faster or competed better,” Granato said. “It’s just part of what we talked about last time. It is part of the process as we go through the season, getting better and better and working hard.”