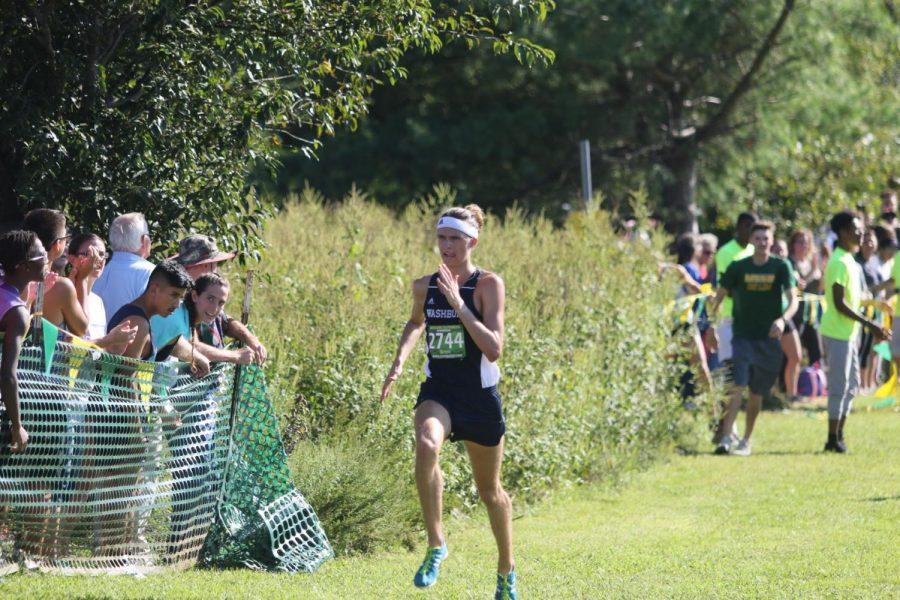 Over a decade ago, Jacob Klemz was just a middle school student waiting in his mom’s car while she coached running practice. Rather than waiting in the car and continue to be bored out of his mind, Klemz decided that he may as well join the team and start running.

“That’s kind of how that got started. I sort of went and said ‘ehh… I’ll stick with this,’” said Klemz.

Now Klemz is gaining national recognition for his accomplishments in cross country. He frequently earns MIAA Athlete of the Week awards and was recently named the Division II Men’s National Athlete of the Week, making it the first time a Washburn athlete has received the honor.

Klemz grew up around Topeka, “out in the country,” as he puts it. He liked to run around outside when he was young, but he never necessarily wanted to run competitively. In fact, Klemz says he was planning on playing basketball. Unfortunately, he laments that he lacks the size to do that at a high level.

“I never thought I’d get into running,” said Klemz. “I was hellbent that I was going to be a college basketball player, but my frame doesn’t allow for that, being 140 pounds and 6’3, you get moved around pretty easily.”

With his mother being a cross country coach, and both of his parents having ran in college, Klemz seemed destined to run at a high level. His plans for the future are geared towards running as well. After college, Klemz wants to run for the Olympics and eventually become a coach.

Klemz never thought he would wind up at Washburn. Growing up in Topeka, he always thought that he would get out of town when he went to college. Then he ended up staying in town and attending Washburn. Klemz has appreciated his time at Washburn, saying it is “all [he] could’ve dreamed of.” He loves the small classes, the professors that you can interact with and his role on the cross country team.

His days consist mainly of morning practice, classes, afternoon practice and homework. He works hard, but knows that it will pay off in the end.

“I want to reach higher levels running, and I know the groundwork I put in now will lead up to that,” said Klemz. “If I were to half-ass it and go through the motions everyday, I’m not going to achieve what I want. It does get monotonous and hard at times, but you just gotta push through that.”

That drive is what assistant cross country coach Kyle Gibson believes propels Klemz to the success he has achieved.

“He’s very high in his goals and in what he expects from his teammates,” said Gibson. “He holds himself and his teammates to a high standard. I think that comes from the drive and wanting to win. He wants to win but he also wants to see his teammates meet similar levels of success that he has. He’s obviously talented, but he does everything he can to be better.”

When he does actually have some free time, Klemz enjoys hanging out with friends and playing video games like Madden, FIFA and so on. He also enjoys being outdoors. Kayaking and hunting are some of his favorite things to do.

Klemz becomes very focused on game days and gets himself ready to go run. His routine before running sees him drinking a small amount of coffee, listening to music and doing his warm ups. Klemz is driven and passionate, and that passion is what keeps him going.

“I try to relax as much as possible. I’m pretty hyper-focused as it is, so I like to joke around with the guys before [a race] because that takes a little bit of their edge off and it takes mine off. We’ll warm up a little before, jog two miles, and then head to the line. From there I’m locked in, I’m thinking of what I have to do in race, how I have to control it, how I’m going to let the pace go out, where I’m going to sit, when I want to move. No cross country race is ever going to go exactly to plan. You have to be constantly ready to adjust,” said Klemz.

Coach Gibson says that his primary job is actually reining in Klemz’s drive. He has to keep him from pushing himself too much.

“With [Klemz], it’s more making sure he doesn’t do too much and overdo it,” said Gibson. “He’s made my job pretty easy in terms of he knows where to draw that line, and I trust him in what he’s giving me.”