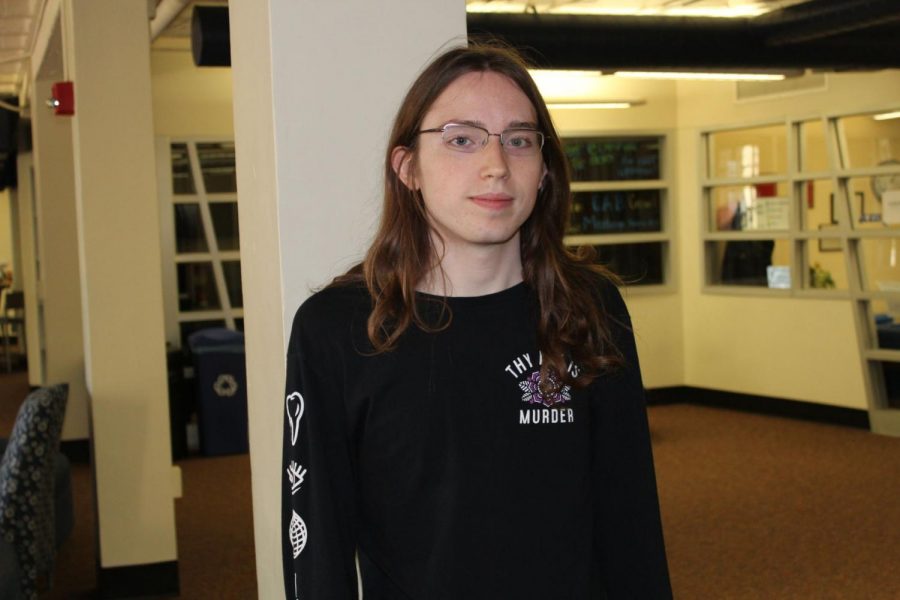 Alex Grimes: Mass Media major Alex Grimes is just a fun dude with a bright future ahead of him.

Junior Alex Grimes is studying mass media with emphasis in film and video and a minor in computer information science and has big plans for the future.

He is from Topeka and he attended Hayden Catholic High School.

“It wasn’t my choice to go there, and there wasn’t very many opportunities,” Grimes said.

After graduation, Grimes wants to find work in the film industry. His overall goal is to get into film editing, as well as editing in general

Grimes didn’t start as a Mass Media major, having started off his freshman year majoring in Computer Information Sciences:

“After my first year, I realized I really don’t want to do this with all the pressure, and the stress was too much for me…” he said. “I have always had an interest in video editing and had a lot of casual experiences with it beforehand, so that’s what made me want to be a film major.”

With a new major, Grimes is much happier with where his career is headed. In regards to his film emphasis, he also spoke about his favorite films and inspirations for what he plans to do after graduation.

“My favorite movie is ‘Scott Pilgrim’ I like a lot of horror movies, a lot of sci-fi. My favorite horror movie is ‘Halloween,'” Grimes said. “Another horror is the first ‘Saw’ movie…Kevin Smith is definitely my favorite, as a writer. Everything that he does is my favorite, and I really want to be like him. He’s a big inspiration to me.”

Despite his change in major, Grimes’ interest in the Computer Information Sciences major still remains, as completing a minor in CIS  keeps him busy

“I really don’t have a lot of free time since I’m a computer science minor. This class that I’m in right now is the first computer science class since my freshman year,” Grimes said. “This whole class has been me trying to catch up with what’s been going on in the computer science world.”

Within both his major and his minor, Professor Phillip Hauptman of CIS Department believes he is certainly well known to be a hard working student.

“I found Alex to be very focused on the work at hand, engaged, unafraid of trying new solutions and asking great questions. Frequently going above and beyond what was asked for,” Hauptman said. “[He is] a great student.”

It is admirable to see a student not giving up on a field, going the extra mile in class and going so far as to minor in it. Grimes has a bright future ahead of him, whether it be in the film industry, or wherever he ends up going with his future.