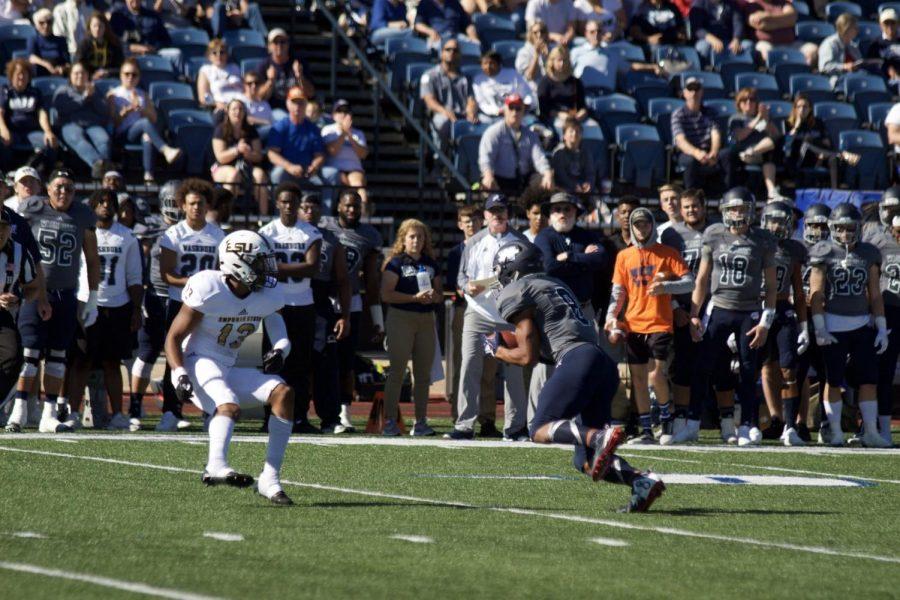 Going for six: Senior wide receiver James Brania-Hopp, hauls in one of his many catches of the day. The Ichabods lost to Emporia State, 34-31.

On Saturday, Oct. 27, the football team took on rival Emporia State in one of the final home games for the year. Last year the Hornets won 26-20. This year’s installment of the rivalry would be just as close as last years with the game going into overtime.

Before the game even started, as the two teams took the field, both teams got after each other and required the officials to step in and separate the players.

Both teams had troubles getting their offenses started. Washburn and Emporia traded multiple punts before Emporia State broke the tie with a 14-yard passing touchdown for the Hornets to go up 7-0.

A little while later at the start of the second quarter, Washburn finally got their offense going as they marched the ball down the field. Sophomore quarterback Mitch Schurig would find senior wide receiver James Brania-Hopp for a 20-yard touchdown that would tie the game at seven.

The Hornets answered on the very next drive.  Emporia State would only take 1:35 to drive 69 yards and complete a short two-yard pass to give themselves a 14-7 lead.

Washburn would not be able to answer the Hornets as they would punt the ball, but senior punter/kicker Perry Schmiedeler would punt pin the Emporia State offense at the one-yard line. The Ichabod defense would keep the Hornets from gaining much ground forcing them to punt.

The Ichabod offense would get the ball back and they would tie the game converting on multiple third-downs throughout the drive. Brania-Hopp faded back and made a spectacular one-handed catch to haul in the touchdown pass from Schurig. Schmiedeler would tack on the extra point for the Ichabods to tie the game, 14-14.

The next drive by Emporia State would start poorly for the Ichabods. The Hornet’s return man muffed the kick, and then he returned the ball all the way to the 43-yard line, but the WU defense stepped up and stopped the Hornet offense again after sophomore defensive back Dwane Simmons forced out a Hornet receiver on third-down.

The Hornets would get their offense rolling again as their first play of the drive would go for 51-yards to put them deep inside Washburn territory. The Ichabod defense made it difficult for the Hornets, forcing the Hornets to convert a fourth down, but the Hornets would punch the ball in from one-yard out to tie the game, 21-21.

Following the touchdown, the Ichabods would get the ball with 47 seconds left in the half. The Ichabods would march into Hornet territory. They would get all the way to the 20-yard line with one second left, but the ensuing field goal from Schmiedeler would be no good.

Emporia State got the ball to start the second half. The Hornets would drive into Washburn territory and convert on fourth and short to put themselves in the red-zone.  However, Corey Ballentine would stop the Hornets’ drive by intercepting a pass in the end-zone and return it to the Washburn 40-yard line. The Washburn offense would not be able to put together a drive as they would punt the ball back to the Hornets.

Like the last time, the Hornets would get inside the Washburn red-zone after a little bit of trickery with a reverse, but a penalty would push them outside the red-zone. The Washburn defense would hold the Hornets to two fourth downs, but the Hornets would convert on both with the second being a one-yard rushing touchdown to give the Hornets a 28-21 lead.

Washburn would take over at the 35-yard line after the ball went out of bounds during the kickoff.  On fourth down at the Emporia State 46-yard line, Schmiedeler was going to punt the ball, but he saw an opening and gained 31 yards on a keeper to gain a first down.  A couple plays later, Schurig found Brania-Hopp again in the end-zone for a touchdown. After Schmiedeler made the extra point, the score would be tied 28-28.

The Hornets were looking to put a drive together after the Ichabod touchdown, but freshman defensive end Braden Rose had other plans as he sacked the quarterback to force the Hornets to punt.

After trading punts, the Ichabods took over at their own one-yard line, but Brania-Hopp made another spectacular catch to bring the Ichabods to the 32-yard line. The Ichabods would eventually punt again four plays later.

On the ensuing drive for the Hornets, they would find a wide-open senior wide receiver Jordan Reed, for a big 25-yard pick up to put the Washburn 10-yard line. The Washburn defense came up big again. On a pass play Kevin Neal tipped the pass and intercepted the ball for a touchback.

Late in the fourth quarter, Schurig would find redshirt-sophomore tight end Jace Williams, for a 22-yard gain. Williams would make a great play on the ball as he pinned it up against his defender before gaining full possession of the ball. Three plays later, Brania-Hopp made another great catch after he hauled in a pass that was good for 27 yards. The Ichabods would run the clock down to the last seconds to set up a field goal, but the field goal was blocked by the Hornets to force overtime with the score still tied 28-28.

The Hornets won the coin toss and elected to defend the first possession.

On third down, Schurig found Williams for a big 26-yard gain to put the Ichabods at the 4-yard line. The Hornets would force the Ichabods to fourth down.  After missing two other field goals on the day, Schmiedeler came through and nailed the field to give the Ichabods the lead, 31-28.

Down by a field goal, the Hornets needed to score to stay in the game. On the first play of their drive they would rush the ball to the 8-yard line. Then, they would find an open receiver to clench a victory against the Bods.

Schurig was happy with the way the team played and prepared, but unsatisfied with how the game ended.

“We had some good practices this week and we prepared well, as always. I thought the offense ran good as a whole. We stuttered a little bit in the third quarter, we only got the ball twice which did not help. We can’t score seven points in the second half and expect to win football games,” Schurig said.

As for Brania-Hopp, he was happy about his career day against rival Emporia State, but knows he and his team have to improve.

“We knew this game was gonna be a really heated game considering the history between the two teams. I just tried to play the way I always do. I have been practicing with all of my guys, there have been more guys that are working just as much as me, it just landed on my shoulders today,” Brania-Hopp said.