Assassin’s Creed Odyssey game Review: A surprise, but a welcome one 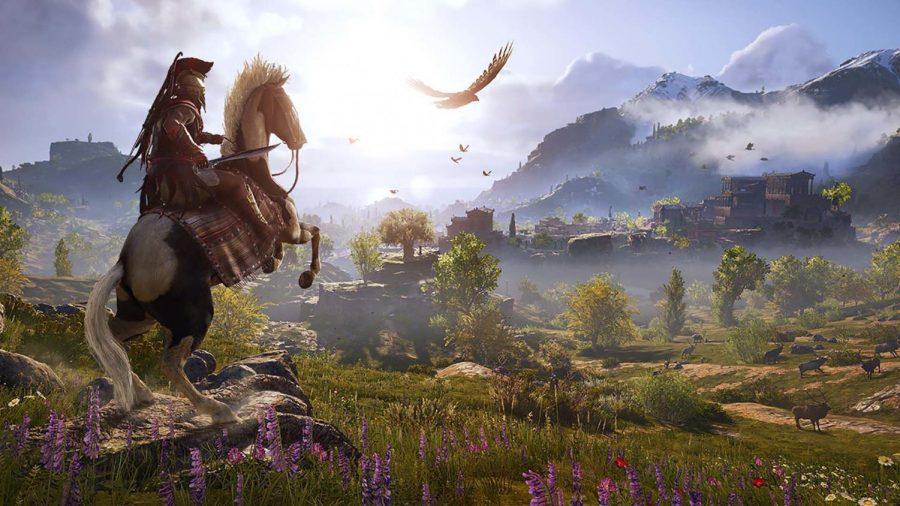 Guilty pleasure: Assassin's Creed Odyssey may not be as phenomenal as CDPR's  the Witcher 3, but it is truly fun all around. Male protagonist Alexios pictured, admiring the Grecian landscape

The latest “Assassin’s Creed” strives to be more akin to “The Witcher 3,” and for the most part it delivers.

“Assassin’s Creed IV: Black Flag” is the last Creed game I played and beat, so it has been a few years since that installment, and I had hope that “Odyssey” would be as good or even surpass IV, my series favorite from what I have played.

Taking place in the Peloponnesian War in Greece, you play as a mercenary, either Alexios or Kassandra, as you can choose male or female this time, stuck in the middle of the war between Sparta and Athens. You don’t have a hidden blade of any sort this time as you are given a broken spear called “The Spear of Leonidas.”

Perhaps the biggest thing that sets this “Assassin’s Creed” apart from the rest is the RPG elements. I played “Origins” enough to know it had some, but “Odyssey” gives you full blown choice making dialogue mechanics much like the good “Fallout” games, “Mass Effect” and of course, “The Witcher 3.” That is where the comparison of choices and the story itself are incredibly important. “Odyssey” is most definitely derivative of “The Witcher 3,” which is one of my favorite games of all time, certainly of the PS4 and Xbox One’s life cycle. The game has those trademark choose-your-own adventure choices in a main story, as well as a number of side quests that give you the same choices and tell a detailed story themselves, or at least they attempt to.

The story and the side quests really can’t be compared to “The Witcher 3” perfect ones, as the side quests in “Odyssey” lack the immediately grab-you stories that Witcher’s does. The same goes for the main story, it is not nearly as good as Witcher’s, but it has had some strong moments. The big issue is the protagonist. Going into the game, it was declared across the internet that Kassandra had the superior voice actor, and just being curious, I chose Alexios to be my character. I haven’t beaten the game yet, but Alexios is nowhere near the level of “Assassin’s Creed IV’s” Edward Kenway, or “The Witcher’s” Geralt. He doesn’t have much of a presence, perhaps that is because you make choices for him.Hhe felt significantly weak compared to the highs of the series in Kenway and Ezio.

The gameplay itself and quests are fun. You will be tasked with dispatching enemies, hunting targets and many more features. Even if the story wasn’t the best, I always had fun playing the missions.

With those RPG elements there is also a loot system. People you fight, Spartans, Athenians, ravenous wolves, you name it, will drop something. Materials, Drachmae (the currency) or weapons. The cool thing is that you are not limited to only a sword. You always carry the spear of Leonidas on your back, but you also have a bow, and a choice between a sword, a dagger, a spear, a blunt staff or my favorite, a big axe.

Naval combat is back as well. I absolutely enjoyed shooting at ships and boarding them in IV, and they have returned. Some may dislike the naval combat at first, but it really grows on you quickly, because of how fun it is. It brings in a new “Lieutenant” system that functions similarly to MGSV’s soldier system, as knocking enemies out instead of stabbing them will give you the opportunity to recruit them and strengthen your ship.

Overall, aside from those story shortcomings, I really enjoyed “Assassin’s Creed Odyssey.” It really takes the series a step in the right direction with decision making and the RPG grind. I’m most definitely looking forward to playing more.