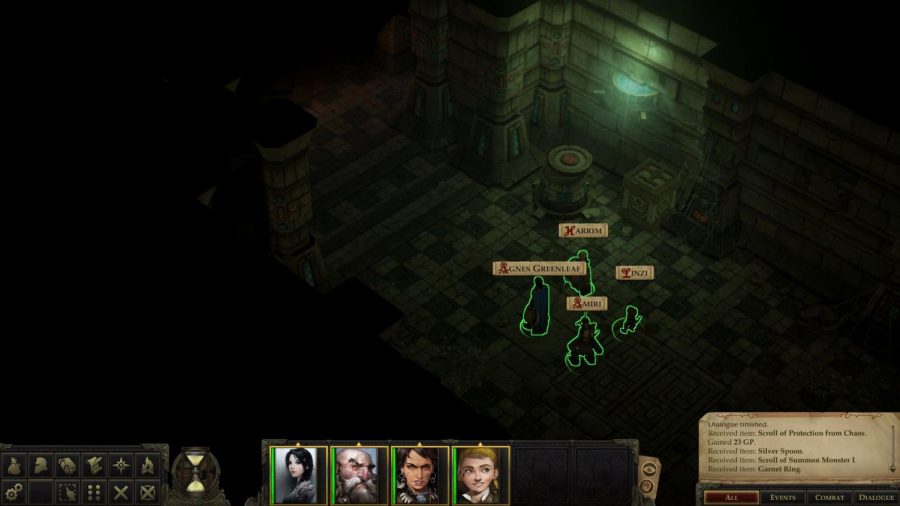 Watch for Traps: The party exploring one  dungeons early in "Pathfinder: Kingmaker."

Video games, RPG (Role-playing games) like “Baldur’s Gate” or “Neverwinter” owe their existence to the pen and paper world. “Pathfinder” is the child of “Dungeons and Dragons” 3.5 edition and both these games are played with dice, paper, and imagination. “Pathfinder,” however, is known for its many miniature adventures and long campaigns, one of which is Kingmaker. Kingmaker takes adventurers and sets them on a quest to create a kingdom and  become its ruler.

Owlcat Games has recently brought this game to life in its new kickstarter video game. “Pathfinder: Kingmaker” takes inspiration from games like “Baldur’s Gate,” but the majority of the game is a direct translation from “Pathfinder” and the Kingmaker model. The classes, races and even the lore itself are from the “Pathfinder” world of Golarion. The result is a video game that players of the “Pathfinder” pen and paper game will instantly be familiar with.

Like nearly all games, it starts with character creation and there is no shortage of options. Nearly any combination of class, race, powers and abilities can be created but this also makes it easy for first time players to make mistakes in the  beginning. Leveling up these characters, and the 11 companions you get in the game, is also just as customizable, but it is also very confusing until you get a handle on what you are trying to create.

Once you finish character creation, it’s on to adventure. After a few brief tutorials, the game sets you on a quest to beat your rival at establishing your kingdom. Traveling in the game is done using a map and token, similar to travel in games like “Icewind Dale.”

When you encounter enemies you will have to take your time to win the battle. Combat is done in real time, but can be paused as needed and all characters roll for initiative then select their powers and abilities. A knowledge of the “Pathfinder” game will be useful as many powers and abilities do not have cooldowns but are only available a certain number of times a day, within the game. This makes the player think long term about every encounter. You may wish to use your  fire ability on a mob that is causing trouble, but what if there is a troll up ahead? This layer of complexity will attract many to the game, but it will also turn many way.

While the game has plenty to keep a player invested and playing for hours, the truth is the learning curve for new players is extremely steep and the tutorials and information will only help a person so far. I’d highly recommend keeping a guide close at hand.