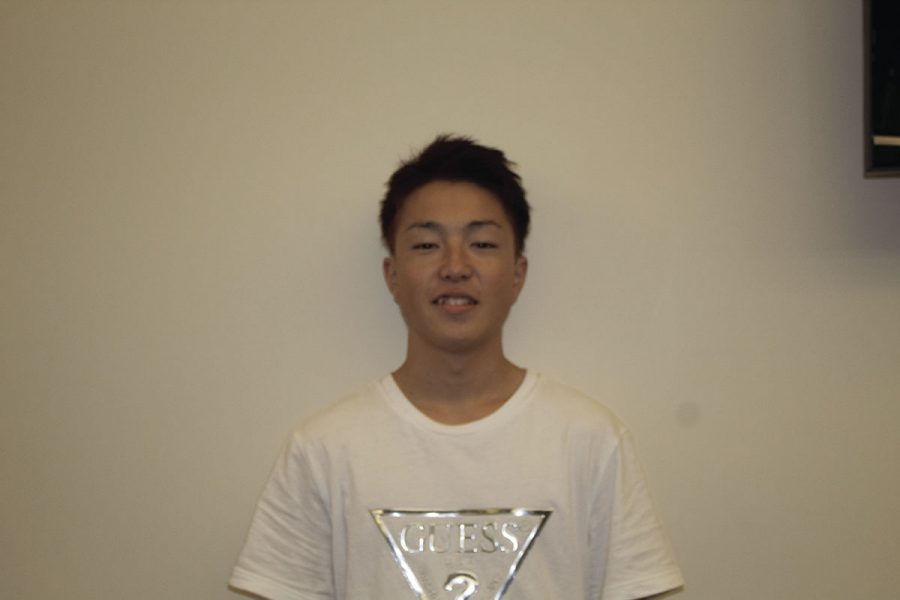 Tomoki Moriyama is a sophomore Japanese international student. He is a student that always tries to do his best at school and works hard to be successful at it.

“I try my best with English in order to communicate better with those around me,” Moriyama said.

He struggles with several aspects of English, but the most difficult part for him is grammar. He is working on improving his English speaking.

When it comes to English, Moriyama doesn’t want to learn simple English, as his future dream job will require a more in-depth understanding of English. Thus, he studies hard to learn several different words a day and always practices his pronunciation.

Moriyama has one older brother and one older sister. They are both successful in their fields with his brother being an engineer and his sister being a cosmetic surgeon.

Moriyama’s major is kinesiology. He enjoys working out by himself and with friends. He likes encouraging them to push their limits, become healthy and get in better shape. His main goal is to utilize kinesiology to help people get in shape and better their lives.

“Kinesiology is very important,” Moriyama said. “I know that exercising and being fit is hard and takes time and endurance. I want to be the one to encourage and help them to be the best person they can be.”

He plans to graduate in 2020, hoping to get through all of his classes to graduate after only three years of schooling.

Moriyama chose Washburn to attend college because he had visited the campus during the summer of 2017. After taking some courses, he found that he enjoyed the classes and the people he met. He thought Washburn was cheaper than the college he originally wanted to go to, so it was not a hard decision to make.

He also likes that there aren’t a lot of places or things to do around the college for fun, so he can spend more time studying than partying, which will make his parents happy.

“I am the only Japanese international student to be pursuing a kinesiology major, as far as I know, which is kind of strange considering most Japanese like to work out,” Moriyama said. “Most pursue business, so I guess it makes sense.”

He likes how helpful other students are to the international students, as well as the fun events that Washburn hosts to help people have fun and make friends. Meeting new people is one of his favorite things to do. One aspect he doesn’t like about Washburn is that he has to travel to get groceries or do fun activities because there isn’t a lot to do in the immediate vicinity of campus. Another is the food cafeterias being too expensive, along with living off campus.

Moriyama’s most interesting class this semester is his intensive English classes, because it gives him an opportunity to improve his English. It is not very difficult for him because his English is developing at a fast pace. His favorite subject is math and he is extremely good at it. He is excited to take a boxing class next semester because he will be able to exercise.

After graduating, Moriyama’s goal is to train professional boxers. He desires to start a business in America then move back to Japan as a professional personal trainer for upcoming boxers.