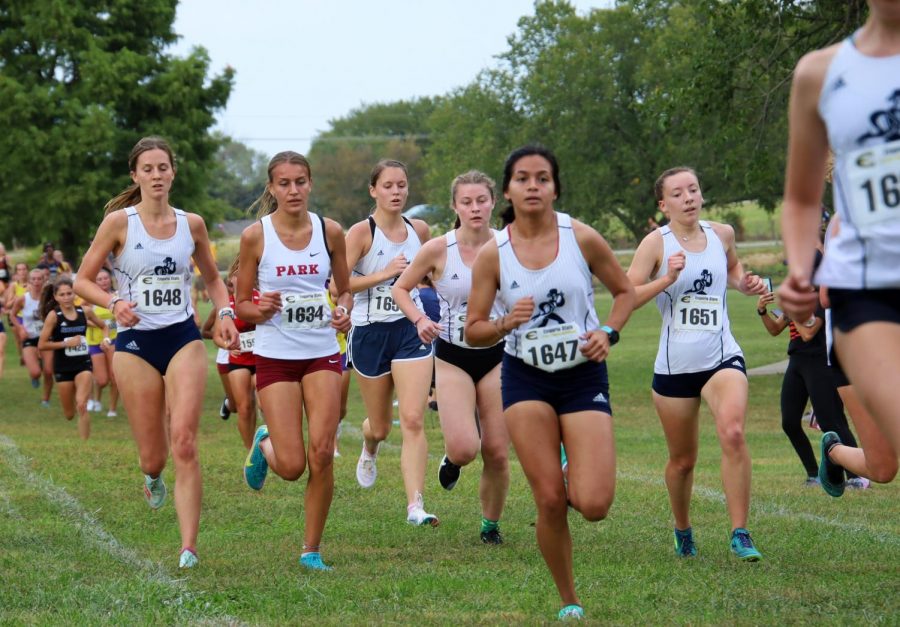 Team Attack - The women's team all pass number a competing runner in one strong move to get to the front of the pack. The team finished in fourth place with 110 points on Sept. 24, 2021.

The Ichabods cross country teams traveled to Emporia on Friday, Sept. 24 to compete in the ESU Invitational. The team used the meet as an introductory course for quite a few newcomers to the program. The meet mostly comprised of freshmen for both teams. The men’s team had five freshmen with one sophomore competing while the women’s team also had five freshmen and two sophomores.

“I think both teams did a good job of being competitive and sticking in it and being tough and being positive, [which] I think was the goal of the meet,” said Graduate Assistant Coach Paddy Robb “A few people felt like they competed really hard, but as long as they finished the race feeling like they left it out there, then you can’t ask for any more.”

Head Coach David Granato shared a similar sentiment. “We came into the race with a lot of freshmen, a lot of young kids and people coming off being a little bit banged up and stuff like that,” said Granato. “So we had a lot of process oriented goals that I think we did a good job striving for and achieving.”

The goals set for the meet served both teams well as they each left with finishes in the top half of the meet.

The men’s team finished fifth as a team earning a total of 166 points. The time spread for the team was 3 minutes and 3 seconds. They were led by freshman Gustav Morch who finished in 25th place with a time of 27:39.69. He was followed by sophomore Brett Kulp who finished 31st with a time of 27:53.2. He was followed by freshman Cooper Griffin and freshman Nick Petrella who finished in 37th and 42nd place respectively. Fellow freshman James Gillin and Troy Grabert rounded out the scoring for the Ichabods adding 52 and 55 points respectively.

The women’s team placed fourth as a team earning a total of 110 points. The time spread for the team was 30 seconds. Sophomore Dulce Ayala Chanez finished the highest of any Washburn runner, placing 16th with a time of 20:01.3. Behind her was freshman Elsa Cozine who had a time of 20:23.3, good for 24th place. Following that, the Ichabods had three runners finish in places 29-30 all within a second of each other. Those were freshman Tessa Jeffery, sophomore Megan Miller and freshman Megan Allancher in that order. Finishing off the scoring were freshman Keely Wagner and freshman Olivia Southbay who finished in 38th and 68th place respectively..

The men’s team all gave strong performances individually at the invitational, and the women’s gave a great effort being able to work together as a team while both worked in a lot of runners who were new to the program. That experience will become valuable in later years and as this season progresses and they continue to grow as a team. The next time both teams will run again is on Oct. 9 in the Fort Hays State University Tiger Open at Sand Plum Nature Trail in Victoria Kansas.