The haste of food waste 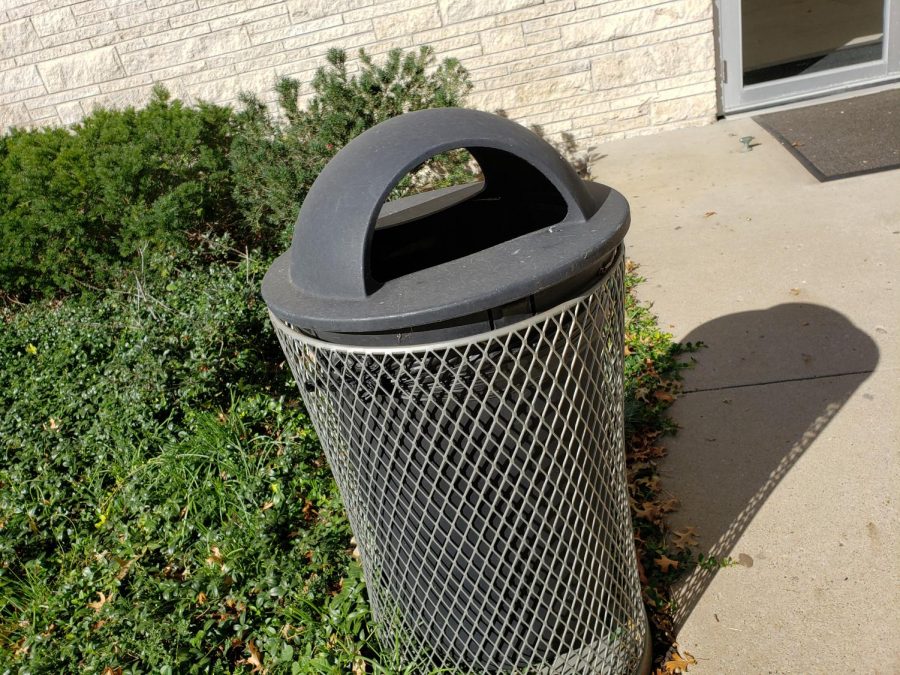 The Average Trash Can - Trash can stands outside of Garvey Fine Arts Center. Trash cans are a large aggregator of food waste.

Food waste is an issue almost everyone is complicit in. It lurks around us as a specter of excess we ignore for the difficult task of curbing it. Yet, there are people who observe it and try.
According to the National Resources Defense Council, up to 40% of food produced in the United States is not eaten. That is a loss of $218 billion a year, and the cost per individual $450. Much of it comes out of vanity or ease of disposal. Consumers throw out produce for cosmetic defects and let food rot in the back of the fridge.

“[It stems from] laziness. Just how easy it is to throw stuff away,” says Garrett Jones, a sophomore majoring in history.

The issue is not exclusively from consumers. Restaurants overwhelm customers with massive portions to make them feel like they are getting their money’s worth. According to a study by the NRDC, from 1982 to 2002, the average caesar salad doubled in calories. When a customer cannot finish his or her plate, it is often discarded or taken home where it may not be consumed.

There are even entire styles of restaurant dedicated to excess. Cafeterias and buffets make much more food than is eaten, which leads to massive waste. Most colleges have some sort of dining hall or cafeteria, such as the Union Cafe or the Lincoln Dining Hall.

“Students tend to fill their plates just because they can,” says Shon Spader, assistant director of dining with Chartwells. Chartwells caters for Washburn, and is responsible for providing the food in Lincoln Dining Hall.

Measures have been taken to reduce food waste on campus. The plates are smaller, so students will not overload it as compared to a larger plate or tray. Still, this does not dissuade everyone.

“They [students] can take as many trips as they want, instead of trying to do it all in one trip. But they don’t want to make that second trip, so they just take as much as they can and throw the rest away,” said Spader.

The campaign to reduce waste is multi-pronged, and requires many people to pitch in where they can. That can mean phrasing the request not to overfill tactfully. Janel Rutherford, director of business and auxiliary services, knows this well.

“You always had to balance the customer service side of that and not limit yourself. We’re just asking you to think about it before you eat it, or before you take it.” said Rutherford.

A general method to reduce food waste is to eat what you know you can, try not to overfill your plate, and be considerate of food other people ignore or discard. With this awareness in mind, food waste can be reduced and the economic and environmental damages can be mitigated.
A look into the trash cans at Washburn is optimistic, but still concerning. There is inedible waste such as paper bags of Chick-Fil-A and empty coffee cups and cans. There are also slight amounts of soda still left over, and the least enjoyable parts of foods and desserts.

Though it may seem inconsequential to throw away an ice cream cone or half a banana, those choices add up in the long run. Only by reducing and being mindful can we slow this advance and its inevitable consequences.