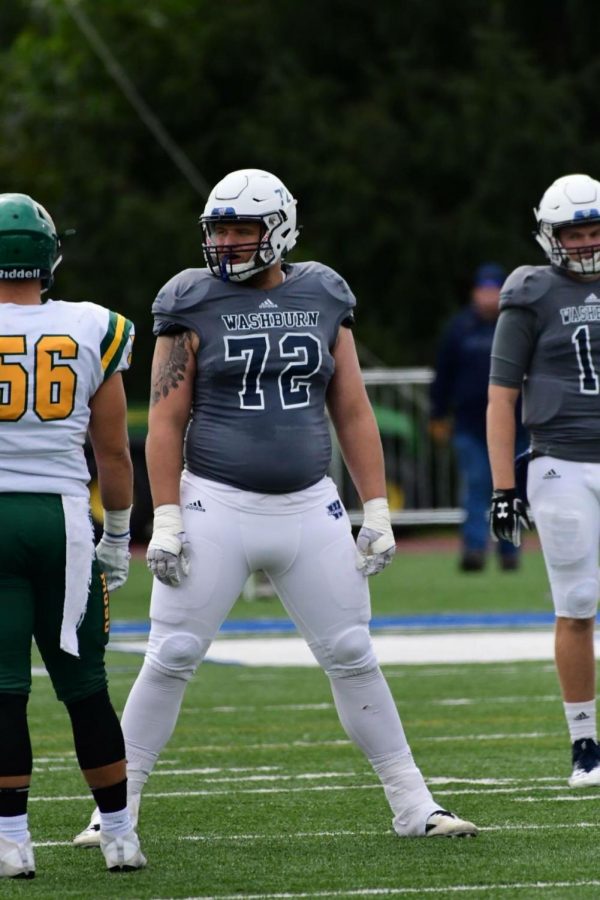 Standing Tall: Senior right tackle Tanner Myers prepares for the next play. Myers uses his son Landyn as motivation to play his hardest.

Senior right tackle Tanner Myers has carried more than the weight of his football equipment on his back to earn his success.

Being raised by his mother and grandmother, Myers grew accustomed to moving around a lot while growing up.

During his spring 2014 semester at HCC, Myers welcomed his son, Landyn, into the world. At just 19 years old, Myers had to find a balance between his football career and fatherhood.

Since attending HCC, Myers has received college credit from four other colleges including Washburn. He says this rapid movement comes from the struggle of maintaining eligibility while also being able to focus on family and watch his son grow up.

This decision did not come easy, or without a cost. Myers gave up a Divison I opportunity at University of Texas at San Antonio in 2016 in order to move back to Kansas and be closer to Landyn.

“I moved back to Kansas to attend Washburn because being in Texas was too far away from my son. Even though I was chasing my dreams, that didn’t mean anything if I had to miss him growing up.” explains Myers.

Playing football at Washburn while also being a father to Landyn has been a challenge.

Since he shares custody of his son, Myers has to drive back and forth from Topeka to Olathe, Kansas a lot in order to make sure Landyn can attend his daycare regularly.

Senior offensive lineman, Trevon Allen, says this is just one of the many things Myers does to be a great dad. As his teammate, Allen sees how hard Meyers works to provide a good life for Landyn.

“I’m not really sure how he does it, I usually feel overwhelmed with just football and classes. I can’t imagine having a four year old as well. I think it helps that [Myers] is just a big kid himself. You could make a movie about all of the things that Tanner’s been through, but he keeps moving forward. At the end of the day he would do anything for his son and I admire that,” Allen said.

Although challenging at times, Myers has embraced fatherhood with open arms and thinks he’s done a pretty good job of accepting a very important role.

“Being a young dad has been challenging, but it’s not as scary as people think. A lot of people think it’s the end of the world, but in the end you’re creating a dynasty and I think that’s pretty cool,” Myers said.

Although he’s made it work, Myers says being a father while playing football would have been impossible without his mother’s help.

“My mom has been one of the biggest supporters of me and my son. When I have football stuff going on, she makes sure that Landyn is taken care of and that is a huge blessing,” Myers says.

Myers excitedly mentioned that Landyn, who turns five in March, will be getting a younger brother soon.

“I actually have another son [named Declan] due in December. I’m excited for Landyn to be a big brother and to be able to raise the new baby without having to be away for football all the time. I wasn’t there for Landyn’s birth so I’m super excited to see Declan be born, ” said Myers.

After a very long college journey, Myers received his Associates in Arts from Coffeyville Community College in December 2015 and plans to graduate with his Bachelor’s in Criminal Justice from Washburn in Spring 2019.